Uses, Guidelines and Types of slings 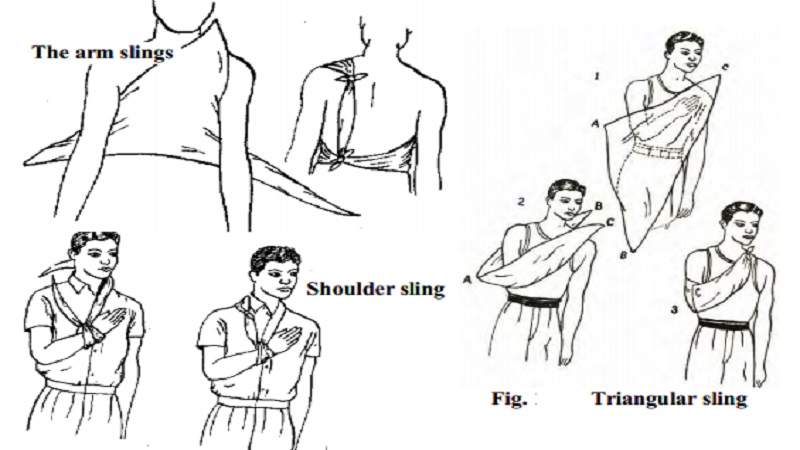 To  prevent pull by upper limb of injuries to chest,

shoulder and the neck.

Types of slings: The arm slings

Face the casualty, put one end of the spread triangular bandage over the uninjured shoulder with the point on the injured side.

Pass the end around the neck and bring it over the injured shoulder. The other end will, now , be hanging down over the chest.

Place the forearm horizontally across the chest and bring the hanging end up. The forearm is now covered by the bandage.

Tie the two ends in such a way that the forearm is horizontally or slightly tilted upwards and the knot is placed in the pit, above the collar bone.

Tuck the part of sling which is loose at the elbow, behind the elbow and bring the fold to the front and pin it up to the front the bandage.

Place the free base of the bandage in such a way that its margin is just at the base of the nail of the little finger.

The nails of all the finger should be exposed.

Inspect the nails to see, if there is any bluish colour. A bluish colour shows that there is a dangerous tightening of splint or plasters and therefore, free flow of blood is not possible.

If the casualty is not wearing a coat, place a soft pad under the neck portion of the sling to prevent rubbing of the skin in that place.

This sling is used to support the wrist only.

The elbow is bent and the forearm is placed across the chest in such a way that the fingers touch the opposite shoulder. In this position, the sling is applied

A clove hitch is passed round the wrist and the ends tied in the hollow above the collar bone on the injured side.

A triangular sling is used in treating a fracture of the collar bone. It helps to keep the hand raised high up, giving relief from pain due to the fracture.

Place the forearm across the chest with the fingers pointing towards the opposite shoulder and the palm over the breast bone.

Place an open bandage over the chest, with one end over the hand and the point beyond the elbow.

Tuck the base of the bandage comfortably, under the forearm and hand.

Fold the lower end, also round the elbow and take it up and cross the back over the uninjured shoulder and tie it with the other free hand into the hollow, above the collar bone.

Tuck the point between forearm and bandage.

Tuck the fold, so formed, backwards over the lower half of the arm and fix it with a safety pin.