It is also commutator type motor. A universal motor is one which operates both on AC and DC supplies. It develops more horsepower per Kg. weight than any other AC motor mainly due to its high speed.

It is also commutator type motor. A universal motor is one which operates both on AC and DC supplies. It develops more horsepower per Kg. weight than any other AC motor mainly due to its high speed.

The principle of operation is the same as that of a DC motor. Though a universal motor resembles a DC series motor, it required suitable modification in the construction, winding and brush grade to achieve sparkles commutation and reduced heating when operated on AC supply, due to increased inductance and armature reaction.

A universal motor could therefore be defined as a series or a compensated series motor [Fig: 4.24 & Fig: 4.25 (a), (b)]designed to operate at approximately the same speed and output at either direct current or single phase alternating current of a frequency not greater than 50HZ, and of approximately the same RMS voltage. Universal motor is also named as AC single phase series motor. 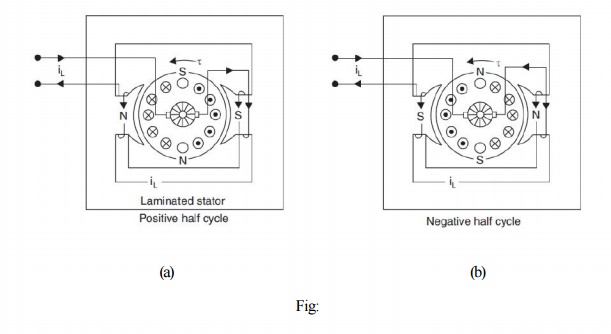 The main parts of a universal motor are an armature, field winding, stator stampings, frame and plates and brushed. The increased sparking at the brush position in AC operation is reduced by the following means:

Providing commutating inter poles in the stator and connecting the interpole winding in series with the armature winding. Providing high contact resistance brushed to reduce sparking at brush positions.

Fig: (a),(b) & Fig: shows the operation of a universal motor on AC supply. In AC operation, both field and armature currents change their polarities, at the same time resulting in unidirectional torque. 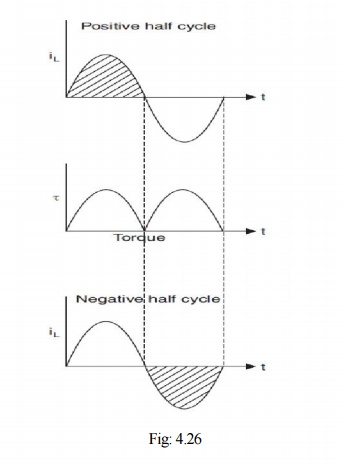 The speed of a universal motor inversely proportional to the load i.e. speed is low at full load and high, on no load. 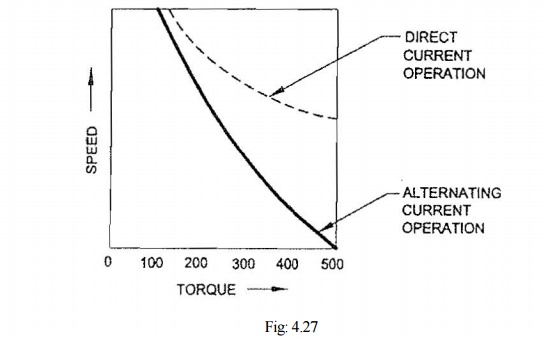 The speed reaches a dangerously high value due to low field flux at no loads in fact the no load speed is limited only by its own friction and windage losses. As such these motors are connected with permanent loads or gear trains to avoid running at no load thereby avoiding high speeds.

Fig: 4.27 shows the typical torque-speed relation of a universal motor, both for AC and DC operations. This motor develops about 450 % of full load torque at starting, as such higher than any other type of single phase motor.

There are numerous applications where universal motors are used, such as hand drills, hair dryers, grinders, blowers, polishers, and kitchen appliances etc. They are also used for many other purposes where speed control and high values of speed are necessary like in vaccum cleaners, food mixers, portable drills and domestic sewage machines. Universal motors of a given horse power rating are significantly smaller than other kinds of a.c. motors operating at the same frequency.