Although the terms “solute” and “solution” are often associated with liquid sam- ples, they can be extended to gas-phase and solid-phase samples as well. The actual units for reporting concentration depend on how the amounts of solute and solu- tion are measured. Table 2.4 lists the most common units of concentration. 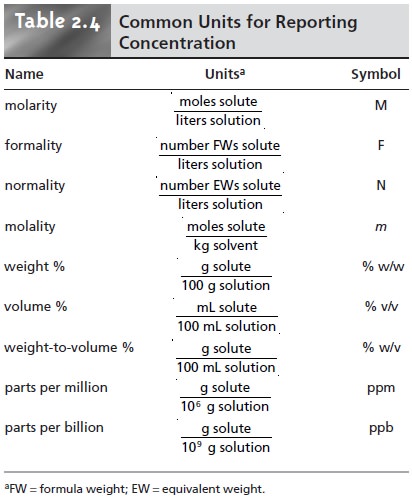 For substances that ionize in solution, such as NaCl, molarity and formality are different. For example, dissolving 0.1 mol of NaCl in 1 L of water gives a solution containing 0.1 mol of Na+ and 0.1 mol of Cl–. The molarity of NaCl, therefore, is zero since there is essentially no undissociated NaCl in solution.

The solution, instead, is 0.1 M in Na+ and 0.1 M in Cl–. The formality of NaCl, however, is 0.1 F because it represents the total amount of NaCl in solution. The rigorous definition of molarity, for better or worse, is largely ignored in the current literature, as it is in this text. When we state that a solution is 0.1 M NaCl we understand it to consist of Na+ and Cl– ions. The unit of formality is used only when it provides a clearer de- scription of solution chemistry.

Molar concentrations are used so frequently that a symbolic notation is often used to simplify its expression in equations and writing. The use of square brackets around a species indicates that we are referring to that species’ molar concentration. Thus, [Na+] is read as the “molar concentration of sodium ions.”

Normality is an older unit of concentration that, although once commonly used, is frequently ignored in today’s laboratories. Normality is still used in some hand- books of analytical methods, and, for this reason, it is helpful to understand its meaning. For example, normality is the concentration unit used in Standard Meth- ods for the Examination of Water and Wastewater,1 a commonly used source of ana- lytical methods for environmental laboratories.

n = 2 for Pb2+ and n = 1 for I–. In an acid–base reaction, the reaction unit is the number of H+ ions donated by an acid or accepted by a base. For the reaction be- tween sulfuric acid and ammonia

we find that n = 2 for H2SO4 and n = 1 for NH3. For a complexation reaction, the reaction unit is the number of electron pairs that can be accepted by the metal or donated by the ligand. In the reaction between Ag+ and NH3

the value of n for Ag+ is 2 and that for NH3 is 1. Finally, in an oxidation–reduction reaction the reaction unit is the number of electrons released by the reducing agent or accepted by the oxidizing agent; thus, for the reaction

n = 1 for Fe3+ and n = 2 for Sn2+. Clearly, determining the number of equivalents for a chemical species requires an understanding of how it reacts.

Consequently, the following simple relationship exists between normality and molarity. 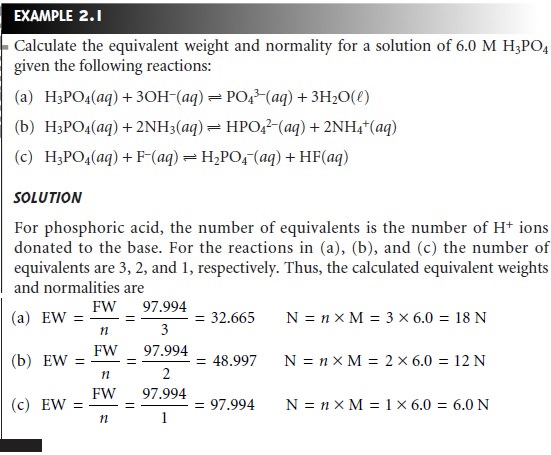 Molality is used in thermodynamic calculations where a temperature independent unit of concentration is needed. Molarity, formality and normality are based on the volume of solution in which the solute is dissolved. Since density is a temperature de- pendent property a solution’s volume, and thus its molar, formal and normal concen- trations, will change as a function of its temperature. By using the solvent’s mass in place of its volume, the resulting concentration becomes independent of temperature.

Parts per million (ppm) and parts per billion (ppb) are mass ratios of grams of solute to one million or one billion grams of sample, respectively. For example, a steel that is 450 ppm in Mn contains 450 μg of Mn for every gram of steel. If we approxi- mate the density of an aqueous solution as 1.00 g/mL, then solution concentrations can be expressed in parts per million or parts per billion using the following relationships.

For gases a part per million usually is a volume ratio. Thus, a helium concentration of 6.3 ppm means that one liter of air contains 6.3 μL of He. 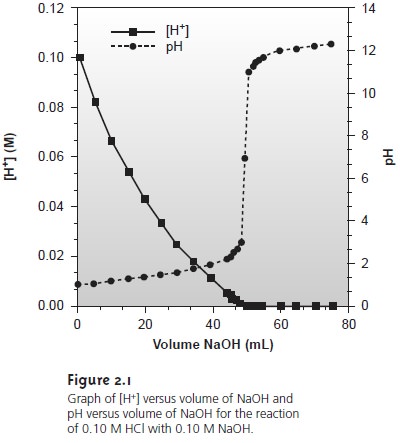 When working with concentrations that span many orders of magnitude, it is often more convenient to express the concentration as a p-function. The p-func- tion of a number X is written as pX and is defined as

Figure 2.1 shows how plotting pH in place of [H+] provides more detail about how the concentration of H+ changes following the addition of NaOH. 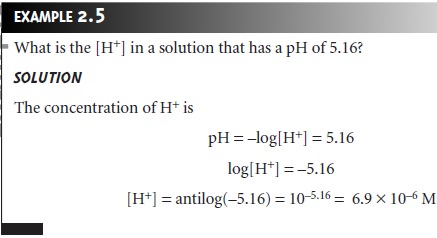