A balanced chemical reaction indicates the quantitative relationships between the moles of reactants and products.

A balanced chemical reaction indicates the quantitative relationships between the moles of reactants and products. These stoichiometric relationships provide the basis for many analytical calculations. Consider, for example, the problem of deter- mining the amount of oxalic acid, H2C2O4, in rhubarb. One method for this analy- sis uses the following reaction in which we oxidize oxalic acid to CO2. 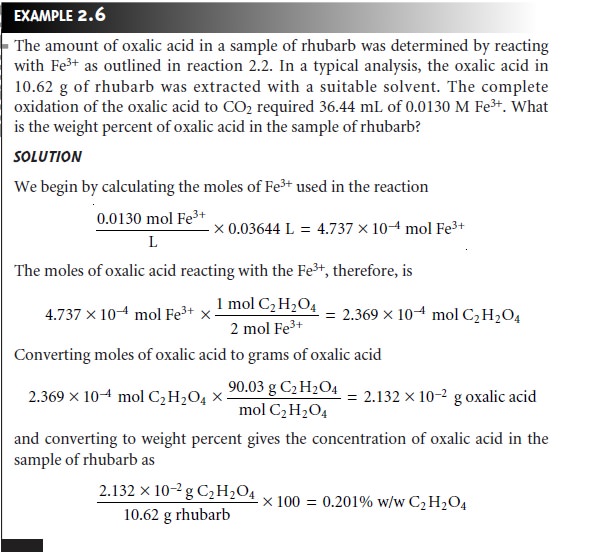 In the analysis described in Example 2.6 oxalic acid already was present in the desired form. In many analytical methods the compound to be determined must be converted to another form prior to analysis. For example, one method for the quan- titative analysis of tetraethylthiuram disulfide (C10H20N2S4), the active ingredient in the drug Antabuse (disulfiram), requires oxidizing the S to SO2, bubbling the SO2 through H2O2 to produce H2SO4, followed by an acid–base titration of the H2SO4 with NaOH. Although we can write and balance chemical reactions for each of these steps, it often is easier to apply the principle of the conservation of reaction units.

A reaction unit is that part of a chemical species involved in a reaction. Con- sider, for example, the general unbalanced chemical reaction

B. Translating the previous statement into mathematical form gives

The easiest principle to appreciate is conservation of mass. Except for nuclear reac- tions, an element’s total mass at the end of a reaction must be the same as that pres- ent at the beginning of the reaction; thus, an element serves as the most fundamen- tal reaction unit. Consider, for example, the combustion of butane to produce CO2 and H2O, for which the unbalanced reaction is

All the carbon in CO2 comes from the butane, thus we can select carbon as a reac- tion unit. Since there are four carbon atoms in butane, and one carbon atom in CO2, we write

Hydrogen also can be selected as a reaction unit since all the hydrogen in butane ends up in the H2O produced during combustion. Thus, we can write

Hydrogen also can be selected as a reaction unit since all the hydrogen in butane ends up in the H2O produced during combustion. Thus, we can write

Although the mass of oxygen is conserved during the reaction, we cannot apply equation 2.3 because the O2 used during combustion does not end up in a single product.

Conservation of mass also can, with care, be applied to groups of atoms. For example, the ammonium ion, NH4+, can be precipitated as Fe(NH4) (SO4) . 6H2O.

a conservation of protons requires that

Note that the moles of oxalic acid are multiplied by 2 since there are two carbon atoms, each of which undergoes a 1-electron oxidation.

As shown in the following examples, the application of conservation principles sim- plifies stoichiometric calculations. 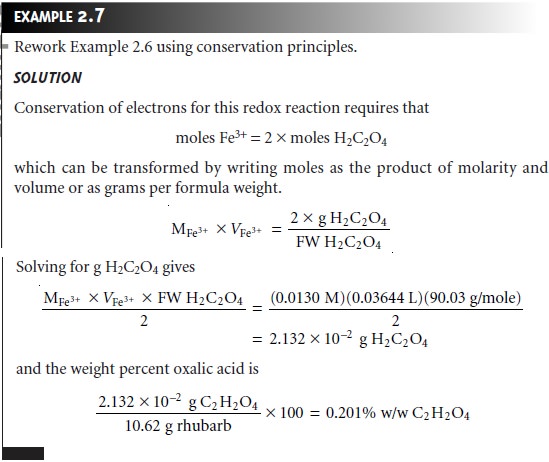 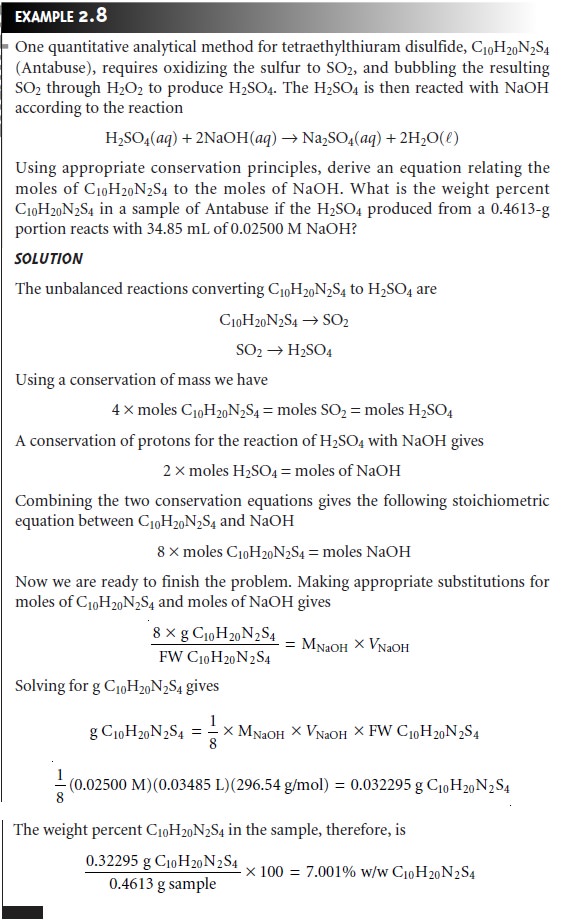