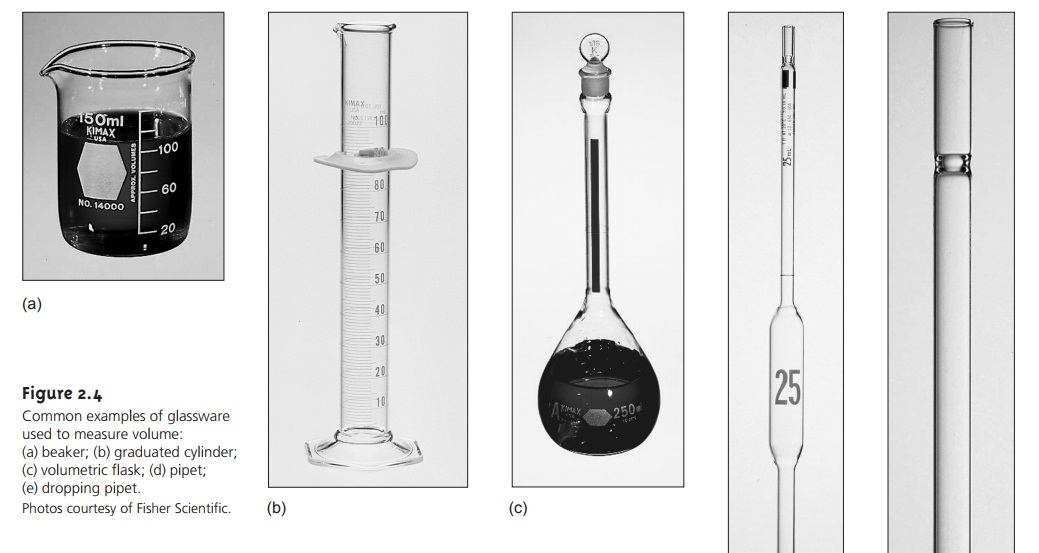 Measurements are made using appropriate equipment or instruments.

An object’s mass is measured using a balance. The most common type of balance is an electronic balance in which the balance pan is placed over an electromagnet (Figure 2.2). The sample to be weighed is placed on the sample pan, displacing the pan downward by a force equal to the product of the sample’s mass and the acceler- ation due to gravity. The balance detects this downward movement and generates a counterbalancing force using an electromagnet. The current needed to produce this force is proportional to the object’s mass. A typical electronic balance has a capacity of 100–200 g and can measure mass to the nearest ±0.01 to ±1 mg. 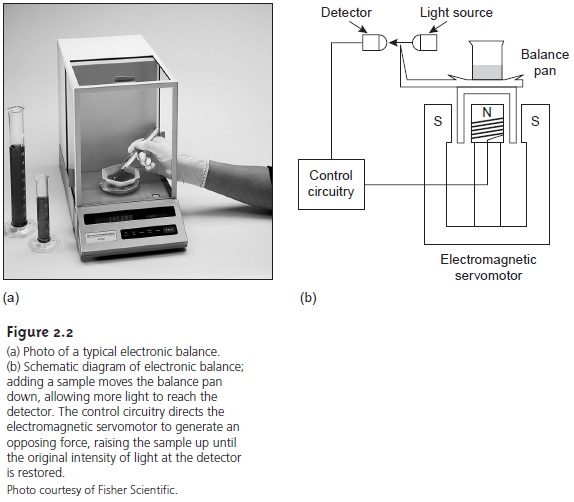 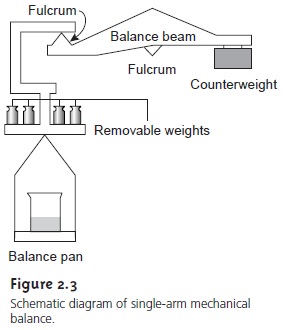 Another type of balance is the single-pan, unequal arm balance (Figure 2.3). In this mechanical balance the balance pan and a set of removable standard weights on one side of a beam are balanced against a fixed counterweight on the beam’s other side. The beam itself is balanced on a fulcrum consisting of a sharp knife edge. Adding a sample to the balance pan tilts the beam away from its balance point. Selected stan- dard weights are then removed until the beam is brought back into balance. The com- bined mass of the removed weights equals the sample’s mass. The capacities and mea- surement limits of these balances are comparable to an electronic balance.

The mass of a sample is determined by difference. If the material being weighed is not moisture-sensitive, a clean and dry container is placed on the balance. The mass of this container is called the tare. Most balances allow the tare to be automat- ically adjusted to read a mass of zero. The sample is then transferred to the con- tainer, the new mass is measured and the sample’s mass determined by subtracting the tare. Samples that absorb moisture from the air are weighed differently. The sample is placed in a covered weighing bottle and their combined mass is deter- mined. A portion of the sample is removed, and the weighing bottle and remaining sample are reweighed. The difference between the two masses gives the mass of the transferred sample.

Several important precautions help to minimize errors in measuring an object’s mass. Balances should be placed on heavy surfaces to minimize the effect of vibra- tions in the surrounding environment and should be maintained in a level position. Analytical balances are sensitive enough that they can measure the mass of a finger- print. For this reason, materials placed on a balance should normally be handled using tongs or laboratory tissues. Volatile liquid samples should be weighed in a covered container to avoid the loss of sample by evaporation. Air currents can sig- nificantly affect a sample’s mass. To avoid air currents, the balance’s glass doors should be closed, or the balance’s wind shield should be in place. A sample that is cooler or warmer than the surrounding air will create convective air currents that adversely affect the measurement of its mass. Finally, samples dried in an oven should be stored in a desiccator to prevent them from reabsorbing moisture from the atmosphere.

Analytical chemists use a variety of glassware to measure volume, several examples of which are shown in Figure 2.4. The type of glassware used depends on how exact the volume needs to be. Beakers, dropping pipets, and graduated cylinders are used to measure volumes approximately, typically with errors of several percent. 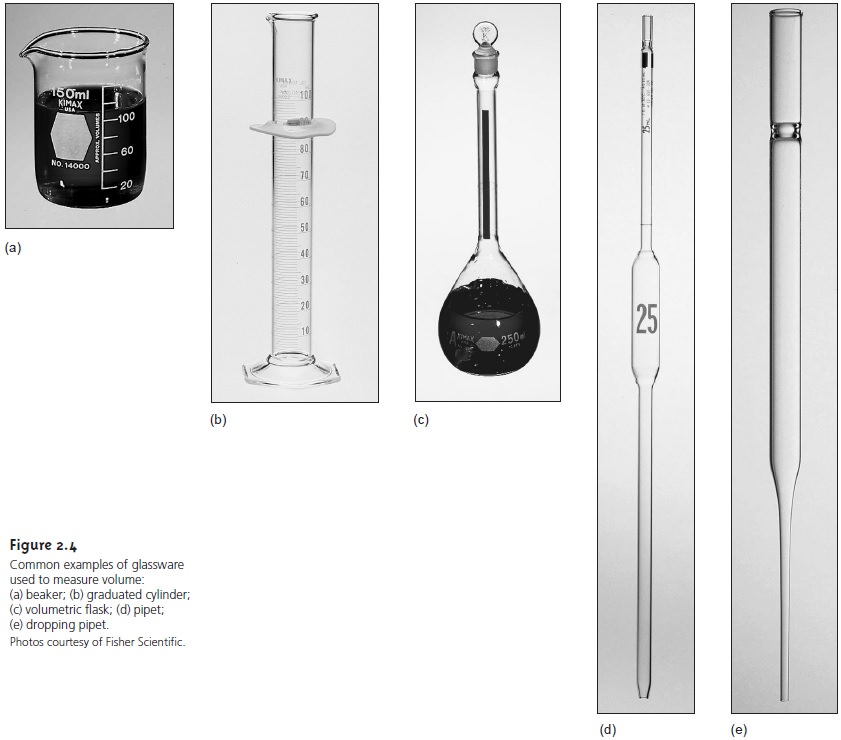 Pipets and volumetric flasks provide a more accurate means for measuring vol- ume. When filled to its calibration mark, a volumetric flask is designed to contain a specified volume of solution at a stated temperature, usually 20 °C.

Because a volumetric flask contains a solution, it is useful in preparing solu- tions with exact concentrations. The reagent is transferred to the volumetric flask, and enough solvent is added to dissolve the reagent. After the reagent is dissolved, additional solvent is added in several portions, mixing the solution after each addi- tion. The final adjustment of volume to the flask’s calibration mark is made using a dropping pipet. To complete the mixing process, the volumetric flask should be in- verted at least ten times.

A pipet is used to deliver a specified volume of solution. Several different styles of pipets are available (Figure 2.5). Transfer pipets provide the most accurate means for delivering a known volume of solution; their volume error is similar to that from an equivalent volumetric flask. A 250-mL transfer pipet, for instance, will deliver 250.0 mL. To fill a transfer pipet, suction from a rubber bulb is used to pull the liquid up past the calibration mark (never use your mouth to suck a solu- tion into a pipet). After replacing the bulb with your finger, the liquid’s level is ad- justed to the calibration mark, and the outside of the pipet is wiped dry. The pipet’s contents are allowed to drain into the receiving container with the tip of the pipet touching the container walls. A small portion of the liquid remains in the pipet’s tip and should not be blown out. Measuring pipets are used to deliver vari- able volumes, but with less accuracy than transfer pipets. With some measuring pipets, delivery of the calibrated volume requires that any solution remaining in the tip be blown out. Digital pipets and syringes can be used to deliver volumes as small as a microliter. 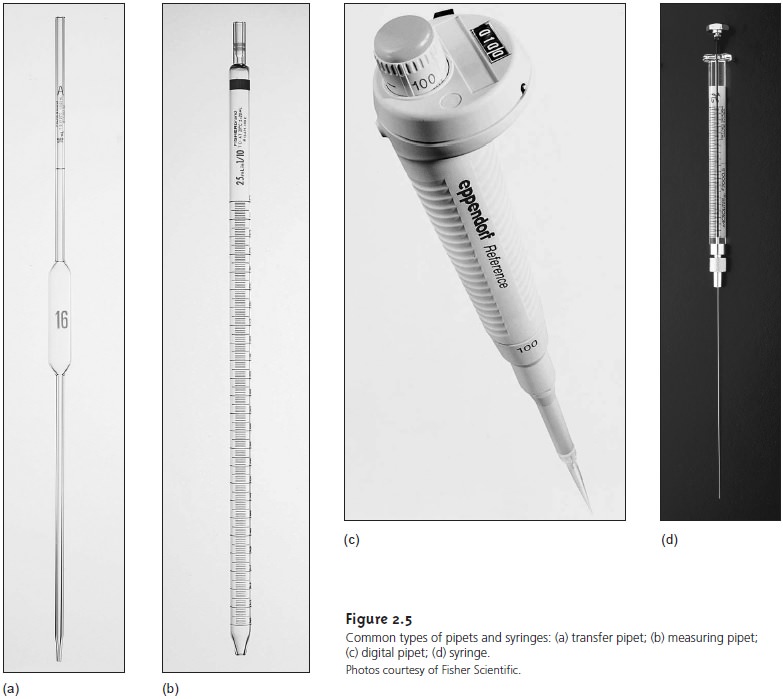 Three important precautions are needed when working with pipets and volumetric flasks. First, the volume delivered by a pipet or contained by a volu- metric flask assumes that the glassware is clean. Dirt and grease on the inner glass surface prevents liquids from draining evenly, leaving droplets of the liquid on the container’s walls. For a pipet this means that the delivered volume is less than the calibrated volume, whereas drops of liquid above the calibration mark mean that a volumetric flask contains more than its calibrated volume. 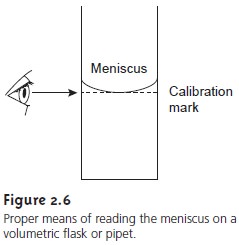 Many materials need to be dried prior to their analysis to remove residual moisture. Depending on the material, heating to a temperature of 110–140 °C is usually suffi- cient. Other materials need to be heated to much higher temperatures to initiate thermal decomposition. Both processes can be accomplished using a laboratory oven capable of providing the required temperature.

Commercial laboratory ovens (Figure 2.7) are used when the maximum de- sired temperature is 160–325 °C (depending on the model). Some ovens include the ability to circulate heated air, allowing for a more efficient removal of moisture and shorter drying times. Other ovens provide a tight seal for the door, allowing the oven to be evacuated. In some situations a conventional laboratory oven can be re- placed with a microwave oven. Higher temperatures, up to 1700° C, can be achieved using a muffle furnace (Figure 2.8). 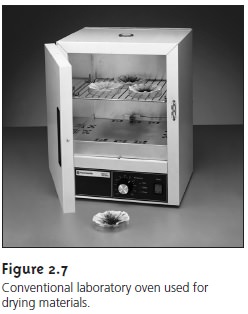 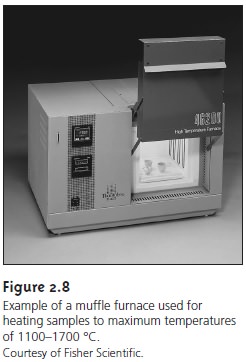 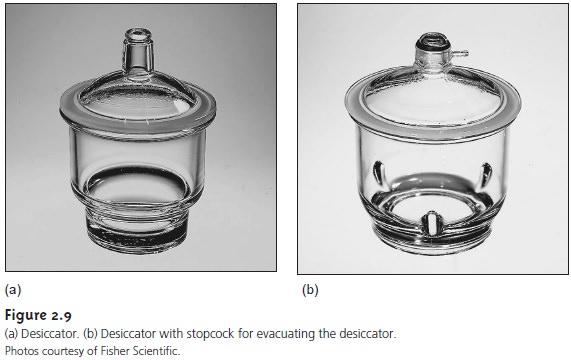 After drying or decomposing a sample, it should be cooled to room tempera- ture in a desiccator to avoid the readsorption of moisture. A desiccator (Figure 2.9) is a closed container that isolates the sample from the atmosphere. A drying agent, called a desiccant, is placed in the bottom of the container. Typical desiccants in- clude calcium chloride and silica gel. A perforated plate sits above the desiccant, providing a shelf for storing samples. Some desiccators are equipped with stopcocks that allow them to be evacuated.