India possesses only one Constitution that caters to the needs of administration both in the Centre and States. Like the United States the individual States possess their own Constitution in addition to the national Constitution.

There is only one citizenship, exists in India, i.e. national citizenship. In the United States the citizens are endowed with both national and State citizenships.

Indian Constitution is partially flexible. Some of the provisions of the Constitution can be carried out by a simple majority in the Parliament.

4. NO Right to Existence for States

Our Constitution doesn’t recognize the right of the States to name and existence. The union parliament can change the nomenclature and territorial identity of the States through an ordinary law. The articles 3 and 4 of the Constitution provide the procedure for the creation of new States and abolition of the existing States. An ordinary bill is introduced in either House of the Parliament for creating a new State or changing the name on the recommendation of the President. The bill is discussed and passed in Parliament leading to the creation of new States. A simple majority in Parliament is the requirement for reshaping the identity of the States.

Activity: Do you know that Sikkim was once called an Associate State of India?

There are three reasons and areas where critics have criticized it as being against the States’ rights and federal spirit of the Constitution.

There is no equality principle followed in the distribution of seats in the Council of States. The seats are distributed on the basis of population of the individual States. The most populous State of Uttar Pradesh has 31 seats whereas the smaller States like Nagaland have only one seat. But in any ideal federalism there should be equality of seat distribution in the upper house as seen in the United States where all the fifty State have two seats each in the upper House of Congress (Parliament) the Senate.

Tamil Nadu has 18 Seats in the Rajya Sabha

Article 249 of the Constitution enables the Rajya Sabha to transfer a subject from the State List to the Union list for the purpose of legislation by parliament on grounds of national interest. 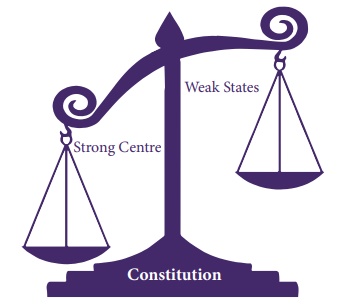 India establishes a single, integrated and hierarchical judiciary. The Supreme Court is the apex judicial institution and the High Courts and the Subordinate Courts function under its supervision and power. In contrast, the classical federalism is following the United States.

India follows a unified auditing system for both the central and State governments. The Comptroller and Auditor-General as mentioned in article 148 of the Constitution controls the entire financial system of the country.