The Indian Constitutional expert Granville Austin described (Granville Austin, renowned scholar of the Indian Constitution, described) Indian federal system as Co-operative Federalism designed to promote co- operation between the Centre and States. The concepts of co-operative federalism applies to those federal governments like the USA where the States have more or adequate powers and the formation of the union is based on “the indestructible union composed of indestructible States”. In a quasi federal State like India, the Union Government can very easily pull down any constituent State for non-cooperation or non-compliance or defiance of Union Government’s will through Constitutional provisions, especially through the emergency powers assigned to the President. The Constitution does not permit States defiance to Centre.

There are many provisions, institutions and bodies created in Indian political system to promote the co-operative functioning of the central and State Governments in India. They can be classified into Constitutional, statutory and political bodies and provisions.

The Constitution itself has created a number of devices to promote cooperation and co-ordination.

a) TO enquire into and advise upon disputes among the States

c) TO make recommendations to the President for better co-ordination on any particular subjects among the State Governments.

The holistic Inter-State Council was established in early nineties to deal with general cooperation among the units of Indian federal system on the recommendation of the Sarkaria Commission. The Prime Minister functions as the chairperson of the council. The Chief Ministers of all the States and Union Territories with Legislative Assemblies, six cabinet ministers of the Union Government, administrators of the Union Territories without Legislative Assemblies and Governors of States under President’s Rule are its members. A Standing Committee consisting of the Union Home Minister, five other Cabinet Ministers and nine Chief Ministers also works as part of the Inter State Council to promote co-operation among the members of the federal system.

There are certain bodies created through the statute of the parliament but not mentioned in the Constitution that function to promote cooperative federalism.

The Zonal Councils were established by the States Reorganization Act in 1956 to achieve cooperation and co-ordination among States. They were created in the backdrop of linguistic reorganization of India and the first Prime Minister of India Jawaharlal Nehru described their objective as to “develop the habit of co-operative working”. 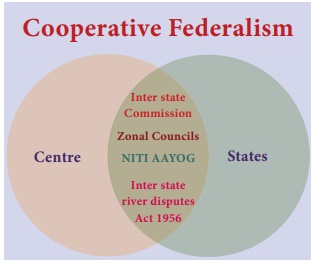 Originally five Zonal Councils were created and later on in 1971 one more Zonal Council was established for the North Eastern States. They are

The Union Home Minister will be the common Chairperson of all the Zonal Councils. Additionally, each Zonal Council will consist of the Chief Minister and two other Ministers of the each State and the Administrator of the Union Territory in the zone.

The Zonal Councils will discuss and suggest measures to promote cooperation among the members in areas like economic and social planning, border disputes, inert-State transport etc.

The River Boards Act, 1956 establishes River Boards to provide advice to the concerned governments concerned for the regulation of an inter-State river or river valley.

The Inter-State Water Disputes Act, 1956 was enacted in accordance with the article 262 of the Constitution that mandated that all inter-State river disputes should be resolved through negotiations. The act provides for the formation of ad hoc tribunals for resolving inter-State water disputes if repeated negotiations prove to be futile in resolving the issue.

The Union Government created the National Commission for Transforming India after dissolving, 65 year old, the Planning Commission on January 2015. The Prime Minister is the ex officio chairman and the permanent members of the governing council are all the Chief Ministers of all the States, Chief Ministers of the Union Territories of Delhi and Puducherry and the Lieutenant Governor of Andaman and Nicobar Islands. One of the primary objectives of the commission is to “foster cooperative federalism through structured support initiatives and mechanisms with the States on a continuous basis”. It recognizes that strong States will make strong nation. But, without Constitutionally empowering more the constituent States and adequate devolution of revenue resources, the States continue to remain over dependent on the Union Government, even in matters relating to tackling of natural calamities.