The Centre-State Relations revolve around the fulcrum of distribution of powers between Centre and States.

There are two aspects to the distribution of legislative powers between the Centre and States in our Constitution. They are

a) Territorial Distribution of Powers

a) Territorial Distribution of Powers

The powers are distributed between the union and State governments territorially. The Union Government possess the powers over the entire territory of India while the States have jurisdiction over their own territories. The Central Government has extra territorial jurisdiction that means that its laws govern not only persons and property within India but also Indian citizens and their properties located in any corner of the world. In contrast, the State legislatures do not possess jurisdiction outside their own territory.

The Constitution distributes the legislative subjects between the Union Government and States in an elaborate scheme. There are three Lists of distribution.

List I (Union List) contains the subjects and powers exclusively allotted to the union parliament. There are 100 subjects here including defense, foreign affairs, banking, currency

List II (State List) contains the subjects that are exclusively allotted to the State governments. There are 59 items including public order, and police, public health, local government, agriculture, forests, fisheries

There is also another category called residuary powers. Any subject not mentioned in the above three lists will automatically come under the jurisdiction of the Union Government. Our Constitution broadly follows the legislative distribution of powers provided in the Government of India Act 1935 enacted during the British colonial era.

The above scheme of legislative power distribution will be normally followed. But under exceptional circumstances the scheme will be suspended. The power of the Union Parliament will be expanded and concomitantly the powers of the State legislatures will be diminished.

When the President of India declares National Emergency the union parliament acquires the powers to legislate over the subjects in the State List. The emergency is declared by the president to tackle problems like war, external aggression and armed rebellion that pose a danger to the existence of our nation. For the purpose of tackling the challenges successfully and effectively, the Union Government gains control over State legislature powers too.

b) Agreement between States

When two or more States agree that their mutual interests will be served better if there is common law on a particular subject and request the Union Government to enact the needed law, the Parliament can enact a common law for the desiring States on that subject even if it falls in the List II (State List).

The Parliament will have powers of enactment on a State subject for the purpose of implementing an international agreement.

Finances are very fundamental in the successful operation of federal system. Indian Constitution distributes financial powers between the union and States in a comprehensive arrangement that is broadly modeled on the 1935 Government of India Act. There are two sources of revenue distributed by the Constitution namely Tax Revenue and Non-tax Revenue.

There are five important ways in which the tax revenues are distributed between the union and State Governments.

1. Certain taxes like Corporation tax and Custom tax are exclusively allotted to the Central Government

2. Certain taxes like sales tax are exclusively allotted to the States

3. Certain taxes are levied by the Union but collected and appropriated by the concerned States and the examples are stamp duties on Bills of Exchange and Excise duties

5. Certain taxes are levied and collected by the Union Government but the proceeds are assigned to the States in which they are levied like the taxes on the sale of advertisements in newspapers.

6. Certain taxes are levied and collected by the Central Government and are distributed between the union and State Governments in a certain proportion like the tax on income other than an agricultural income 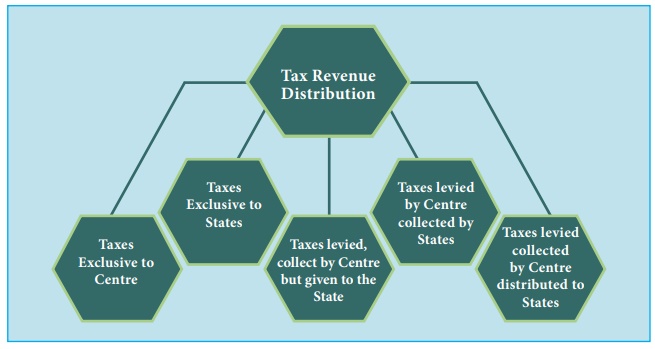 The State Governments get revenue from the receipts of commercial enterprises and industrial undertakings allotted to them. The sources among others include forests, irrigation, electricity, road transport.

The Constitution understands the greater financial needs of certain States and therefore the article 275 asks the Union Government to provide Grants- in-Aid to the States like Assam, keeping in mind the imperative of the development and welfare of the tribal population.

The president of India consitutes a Finance Commission once in every five years. The article 280 of the Constitution describes the composition of the Finance Commission. It will have one Chairman and four other members. The Chairman will be a person with experience in public affairs and the members will have experience in financial administration, special knowledge of economics, special knowledge of public accounts and government finances, and one member will have the qualification of a High Court judge.

Finance Commission will provide recommendations in the following manner:

1. For the distribution of net proceeds of taxes between the Centre and States

3. Measures needed to increase the Consolidated Fund of India or States to supplement the resources of the Panchayat Bodies

4. Measures needed to increase the Consolidated Fund of India or States to supplement the resources of the Urban Local Bodies

5. Any other matter referred by the president