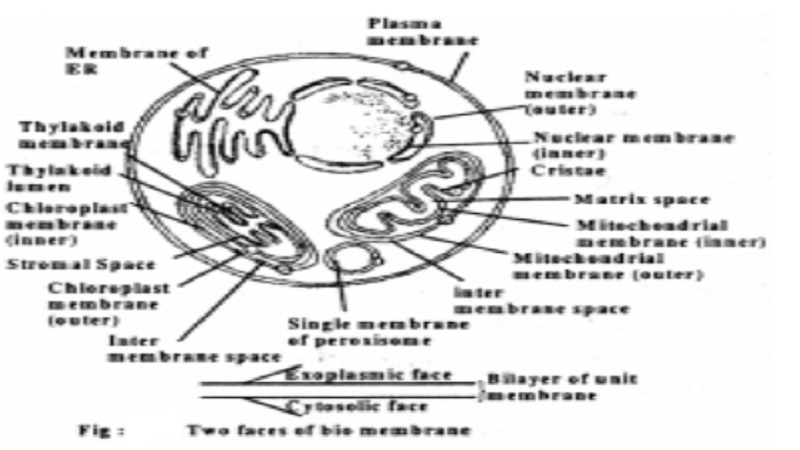 All the prokaryotic and eukaryotic cells are enclosed by an elastic thin covering called plasma membrane. It is selectively permeable since it allows only certain substances to enter or leave the cell through it. In addition to this eukaryotic cells possess intracellular membranes collectively called cytoplasmic membrane system, that surround the vacuole and cell organelles.

All the prokaryotic and eukaryotic cells are enclosed by an elastic thin covering called plasma membrane. It is selectively permeable since it allows only certain substances to enter or leave the cell through it. In addition to this eukaryotic cells possess intracellular membranes collectively called cytoplasmic membrane system, that surround the vacuole and cell organelles. Plasma membrane and the sub-cellular membranes are together known as biological membranes.

Ultra structure of the cell membrane

Cell membranes are about 75 A-degree thick. Under the electron microscope they appear to consist of 3 layers.

an outer electron dense layer of about 20Adeg thick

an inner electron dense layer of about 20Adeg thick.

The outer and inner layers are formed of protein molecules whereas the middle one is composed of two layers of phospholipid molecules. Such a trilaminar structure is called 'Unit membrane' which is a basic concept of all membranes.

Many models have been proposed to explain the molecular structure of plasma membrane. Fluid mosaic model was proposed bySinger and Nicholson (1972) and it is widely accepted by all. According to this model the cell membrane has quasifluid structure. All cellular membranes line closed compartments and have a cytosolic and an exoplasmic face. Membranes are formed of lipids and priteins. According to this model the membrane is viewed as a two dimensional mosaic of phospholipids and protein molecules.

The lipid molecules form a continuous bilayer. The protein molecules are arranged as extrinsic proteins on the surface of lipid bilayer and as intrinsic proteins that penetrate the lipid bilayer either wholloy or partially. The lipid bilayer is formed of a double layer of phospholipid molecules. They are amphipathic molecules i.e. they have a hydrophilic and hydrophobic part. The arrangement of phospholipids forms a water resistant barrier. So that only lipid soluble substances can pass through readily but not water soluble substances.

The phospholipid bilayer forms the basic structure of all biomembranes which also contain proteins, glycoproteins, cholesterol and other steroids and glycolipids. The presence of specific sets of membrane proteins permits each type of membrane to carryout distinctive functions.

Proteins are arranged in two forms.

Extrinsic or peripheral proteins:These are superficially attached to either face of lipid bimolecular membrane and are easily removable by physical methods.

Intrinsic or Integral proteins:These proteins penetrate the lipid either wholly or partially and are tightly held by strong bonds. In order to remove them, the whole membrane has to be disrupted. The integral proteins occur in various forms and perform many functions.

In all cells the plasma membrane has several essential functions to perform. These include transporting nutrients into and metabolic wastes out of the cell preventing unwanted materials from entering the cell. In short, the intercellular and intra cellular transport is regulated by plasma membrane. The plasma membrane maintains the proper ionic composition pH(~7.2) and osmotic pressure of the cytosol. To carry out all these functions, the plasma membrane contains specific trasport proteins that permit the passage of certain small molecules but not others. Several of these proteins use the energy relaeased by ATP hydrolysis to pump ions and other molecules into or out of the cell against concentration gradients. Small charged molecules such as ATP and amino acids can diffuse freely within the cytosol but are restricted in their ability to leave or enter it across the plasma membrane.

In addition to these universal functions, the plasma membrane has other important functions to perform. Enzymes bound to the plasma membrane catalyze reactions that would occur with difficulty in an aqueous environment. The plasma membranes of many types of eukaryotic cells also contain receptor proteins that bind specific signalling molecules like hormones, growth factors, neurotransmitters etc. leading to various cellular responses.

Like the entire cell, each organelle in eukaryotic cells is bounded by a unit membrane containing a unique set of proteins essential for its proper functioning.