Optical fibers can be used as sensors to measure

It is based on the principle of Interference between the beams emerging out from the reference fiber and the fiber kept in the measuring environment.

A monochromatic source of light is emitted from the laser source. 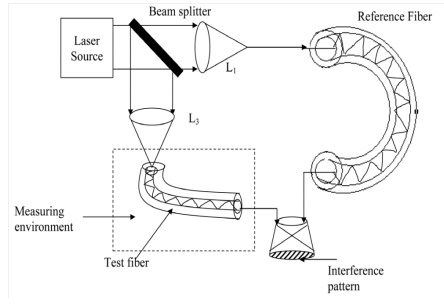 It consists of a Laser source to emit light. A beam splitter, made of glass plate is inclined at an angle of 45º used to split the single beam into two beams.

environment to be sensed.

The beam after passing through the reference fiber then falls on the lens L2.

The spitted beam passes through the lens L3 and is focused onto the test fiber kept in the environment to be sensed.

The    splitted       beam after  passing through the test fiber is made to fall on the lens L2.

The two beams after passing through the fibers, produces a path difference due to the change in parameters such as pressure, temperature etc., in the environment.

Therefore a path difference is produced between the two beams, causing the interference pattern.

Thus the change in pressure (or) temperature can be accurately measured with the help of the interference pattern obtained.

And other quantities by modifying a fiber so that the quantity to be measured modulates the intensity, phase, polarization, wavelength or transit time of light in the fiber. Sensors that vary the intensity of light are the simplest, since only a simple source and detector are required. A particularly useful feature of intrinsic fiber optic sensors is that they can, if required, provide distributed sensing over very large distances.

Temperature can be measured by using a fiber that has evanescent loss that varies with temperature, or by analyzing the Raman scattering of the optical fiber. Electrical voltage can be sensed by nonlinear optical effects in specially-doped fiber, which alter the polarization of light as a function of voltage or electric field. Angle measurement sensors can be based on the Sagnac effect.

Optical fibers are used as hydrophones for seismic and sonar applications. Hydrophone systems with more than one hundred sensors per fiber cable have been developed. Hydrophone sensor systems are used by the oil industry as well as a few countries' navies.

Both bottom-mounted hydrophone arrays and towed streamer systems are in use. The German company Sennheiser developed a laser microphone for use with optical fibers.

A fiber optic microphone and fiber-optic based headphone are useful in areas with strong electrical or magnetic fields, such as communication amongst the team of people working on a patient inside a magnetic resonance imaging (MRI) machine during MRI-guided surgery.

Optical fiber sensors for temperature and pressure have been developed for down hole measurement in oil wells. The fiber optic sensor is well suited for this environment as it functions at temperatures too high for semiconductor sensors (distributed temperature sensing).

Optical fibers can be made into Interferometric sensors such as fiber optic gyroscopes, which are used in the Boeing 767 and in some car models (for navigation purposes). They are also used to make hydrogen sensors.

Fiber-optic sensors have been developed to measure co-located temperature and strain simultaneously with very high accuracy using fiber Bragg gratings. This is particularly useful when acquiring information from small complex structures. Brillouin scattering effects can be used to detect strain and temperature over larger distances (20–30 kilometers).

A fiber-optic AC/DC voltage sensor in the middle and high voltage range (100– 2000 V) can be created by inducing measurable amounts of Kerr nonlinearity in single mode optical fiber by exposing a calculated length of fiber to the external electric field.[12] The measurement technique is based on polar metric detection and high accuracy is achieved in a hostile industrial environment.

High frequency (5 MHz–1 GHz) electromagnetic fields can be detected by induced nonlinear effects in fiber with a suitable structure. The fiber used is designed such that the Faraday and Kerr effects cause considerable phase change in the presence of the external field. With appropriate sensor design, this type of fiber can be used to measure different electrical and magnetic quantities and different internal parameters of fiber material.

Electrical power can be measured in a fiber by using a structured bulk fiber ampere sensor coupled with proper signal processing in a polar metric detection scheme. Experiments have been carried out in support of the technique.

Extrinsic fiber optic sensors use an optical fiber cable, normally a multimode one, to transmit modulated light from either a non-fiber optical sensor, or an electronic sensor connected to an optical transmitter. A major benefit of extrinsic sensors is their ability to reach places which are otherwise inaccessible. An example is the measurement of temperature inside aircraftjet engines by using a fiber to transmit radiation into a radiation pyrometer located outside the engine. Extrinsic sensors can also be used in the same way to measure the internal temperature of electrical transformers, where the extreme electromagnetic fields present make other measurement techniques impossible.

Extrinsic fiber optic sensors provide excellent protection of measurement signals against noise corruption. Unfortunately, many conventional sensors produce electrical output which must be converted into an optical signal for use with fiber. For example, in the case of a platinum resistance thermometer, the temperature changes are translated into resistance changes. The PRT must therefore have an electrical power supply. The modulated voltage level at the output of the PRT can then be injected into the optical fiber via the usual type of transmitter. This complicates the measurement process and means that low-voltage power cables must be routed to the transducer.

The  most  sensitive  fiber  optic  sensing  method  is  based  on  the  optical  phase modulation. The total phase of the light along an optical fiber depends on the properties like the physical length of the fiber, transverse geometrical dimension of the guide, refractive index and the index profile of the waveguide. If we assume that index profile remains constant with environmental variations, then the depth of phase modulation depends on the other remaining parameters. The total physical length of an optical fiber may be modulated by the perturbations like thermal expansion, application of longitudinal strain and application of a hydrostatic pressure causing expansion via Poisson's ratio. The refractive index varies with temperature, pressure and longitudinal strain via photo elastic effect. Waveguide dimensions vary with radial strain in a pressure field, longitudinal strain in a pressure field and by thermal expansion. The phase change occurring in an optical fiber is detected using optical fiberInterferometric techniques that convert phase modulation into intensity modulation’s:". 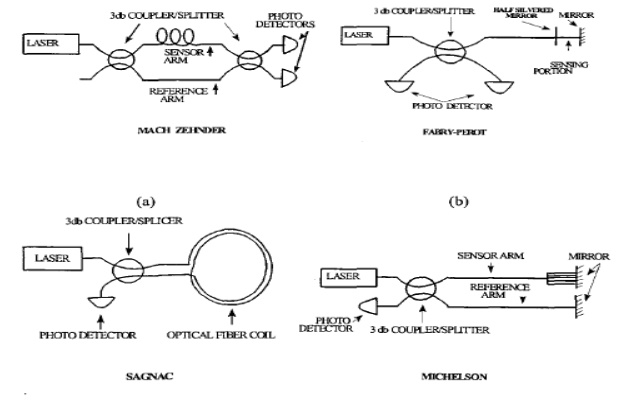 Light is sent through a transmitting fiber and is made to fall on a moving target. The reflected light from the target is sensed by a detector with respect to intensity of light reflected and the displacement of the target is measured..

The axis of the transmitting fiber and the receiving fiber with respect to the moving target can be adjusted to increase the sensitivity of the sensor.