The absorption coefficient of the material in the modulator can be manipulated by the Franz-Keldysh effect, the Quantum-confined Stark effect, excitonic absorption, changes of Fermi level, or changes of free carrier concentration. Usually, if several such effects appear together, the modulator is called an electro-absorptive modulator.

Separate case of modulators are spatial light modulators (SLMs). The role of SLM is modification two dimensional distribution of amplitude and/or phase of an optical wave.

. Electro-optic modulator (EOM) is an optical device in which a signal-controlled element exhibiting the electro-optic effect is used to modulate a beam of light. The modulation may be imposed on the phase, frequency, amplitude, or polarization of the beam. Modulation bandwidths extending into the gigahertz range are possible with the use of laser-controlled modulators.

The electro-optic effect is the change in the refractive index of a material resulting from the application of a DC or low-frequency electric field. This is caused by forces that distort the position, orientation, or shape of the molecules constituting the material. Generally, a nonlinear optical material (organic polymers have the fastest response rates, and thus are best for this application) with an incident static or low frequency optical field will see a modulation of its refractive index.

The simplest kind of EOM consists of a crystal, such as lithium niobate, whose refractive index is a function of the strength of the local electric field. That means that if lithium niobate is exposed to an electric field, light will travel more slowly through it. But the phase of the light leaving the crystal is directly proportional to the length of time it takes that light to pass through it. Therefore, the phase of the laser light exiting an EOM can be controlled by changing the electric field in the crystal.

The voltage required for inducing a phase change of  ᴨ is called the half-wave voltage (V ᴨ  ). For a Pockels cell, it is usually hundreds or even thousands of volts, so that a high-voltage amplifier is required. Suitable electronic circuits can switch such large voltages within a few nanoseconds, allowing the use of EOMs as fast optical switches.

The Pockels effect electro-optic effect, produces birefringence in an optical medium induced by a constant or varying electric field. It is distinguished from the Kerr effect by the fact that the birefringence is proportional to the electric field, whereas in the Kerr effect it is quadratic to the field. The Pockels effect occurs only in crystals that lack inversion symmetry, such as lithium niobate or gallium arsenide and in other non-Centro symmetric media such as electric-field poled polymers or glasses.

Pockels Cells are voltage-controlled wave plates. The Pockels effect is the basis of Pockels Cells operation. Pockels Cells may be used to rotate the polarization of a passing beam. See Applications below for uses.

A transverse Pockels Cell comprises two crystals in opposite orientation, which give a zero order wave plate when voltage is turned off. This is often not perfect and drifts with temperature. But the mechanical alignment of the crystal axis is not so critical and is often done by hand without screws; while misalignment leads to some energy in the wrong ray ( for example, horizontal or vertical), in contrast to the longitudinal case, the loss is not amplified through the length of the crystal.

The electric field can be applied to the crystal medium either longitudinally or transversely to the light beam. Longitudinal Pockels Cells need transparent or ring electrodes. Transverse voltage requirements can be reduced by lengthening the crystal.

Alignment of the crystal axis with the ray axis is critical. Misalignment leads to birefringence and to a large phase shift across the long crystal. This leads to polarizationrotation if the alignment is not exactly parallel or perpendicular to the polarization.

Dynamics within the cell

Because of the high relative dielectric constant of εr ≈ 36 inside the crystal, changes in the electric field propagate at a speed of only c/6. Fast non-fiber optic cells are thus embedded into a matched transmission line. Putting it at the end of a transmission line leads to reflections and doubled switching time. The signal from the driver is split into parallel lines which lead to both ends of the crystal. When they meet in the crystal their voltages add up. Pockels Cells for fibre optics may employ a traveling wave design to reduce current requirements and increase speed.

Usable crystals also exhibit the piezoelectric effect to some degree (RTP has the lowest, BBO and lithium niobate are high). After a voltage change sound waves start propagating from the sides of the crystal to the middle. This is important not for pulse pickers, but for boxcar windows. Guard space between the light and the faces of the crystals needs to be larger for longer holding times. Behind the sound wave the crystal stays deformed in the equilibrium position for the high electric field. This increases the polarization. Due to the growing of the polarized volume the electric field in the crystal in front of the wave increases linearly, or the driver has to provide a constant current leakage.

The driver must withstand the doubled voltage returned to it. Pockels Cells behave like a capacitor. When switching these to high voltage a high charge is needed; consequently, 3 ns switching requires about 40 A for a 5 mm aperture. Shorter cables reduce the amount of charge wasted in transporting current to the cell.

The driver may employ many transistors connected parallel and serial. The transistors are floating, and need DC isolation for their gates. To do this, the gate signal is connected via optical fiber, or the gates are driven by a large transformer. In this case, careful compensation for feedback is needed to prevent oscillation.

The driver may employ a cascade of transistors and a triode. In a classic, commercial circuit the last transistor is an IRF830 MOSFET and the triode is an Eimac Y690 triode. The setup with a single triode has the lowest capacity; this even justifies turning off the cell by applying the double voltage. A resistor ensures the leakage current needed by the crystal and later to recharge the storage capacitor. The Y690 switches up to 10 kV and the cathode delivers 40 A if the grid is on +400 V. In this case the grid current is 8 A and the input impedance is thus 50 ohms, which matches standard coaxial cables, and the MOSFET can thus be placed remotely. Some of the 50 ohms are spent on an additional resistor which pulls the bias on -100 V. The IRF can switch 500 volts. It can deliver 18 A pulsed. Its leads function as an inductance, a storage capacitor is employed, the 50 ohm coax cable is connected, the MOSFET has an internal resistance, and in the end this is a critically damped RLC circuit, which is fired by a pulse to the gate of the MOSFET.

The gate needs 5 V pulses (range: +-20 V) while provided with 22 nC. Thus the current gain of this transistor is one for 3 ns switching, but it still has voltage gain. Thus it could theoretically also be used in common gate configuration and not in common source configuration. Transistors, which switch 40 V are typically faster, so in the previous stage a current gain is possible.

Pockels Cells are used in a variety of scientific and technical applications:

A Pockels Cell, combined with a polarizer, can be used for a variety of applications. Switching between no optical rotation and 90° rotation creates a fast shutter capable of "opening" and "closing" in nanoseconds. The same technique can be used to impress information on the beam by modulating the rotation between 0° and 90°; the

exiting beam's intensity, when viewed through the polarizer, contains an amplitude-modulated signal.

Preventing the feedback of a lasercavity by using a polarizing prism. This prevents optical amplification by directing light of a certain polarization out of the cavity. Because of this, the gain medium is pumped to a highly excited state. When the medium has become saturated by energy, the Pockels Cell is switched, and the intracavity light is allowed to exit. This creates a very fast, high intensity pulse. Q-switching, chirped pulse amplification, and cavity dumping use this technique.

Pockels Cells can be used for quantum key distribution by polarizingphotons.

Pockels Cells in conjunction with other EO elements can be combined to form electro optic probes.

A Pockels Cell was used by MCA Disco-Vision (DiscoVision) engineers in the optical videodisc mastering system. Light from an argon-ion laser was passed through the Pockels Cell to create pulse modulations corresponding to the original FM video and audio signals to be recorded on the master videodisc. MCA used the Pockels Cell in videodisc mastering until the sale to Pioneer Electronics. To increase the quality of the recordings, MCA patented a Pockels Cell stabilizer that reduced the second harmonic distortion that could be created by the Pockels Cell during mastering. MCA used either a DRAW (Direct Read After Write) mastering system or a photoresist system. The DRAW system was originally preferred, since it didn't require clean room conditions during disc recording, and allowed instant quality checking during mastering. The original single-sided test pressings from 1976/77 were mastered with the DRAW system as were the "educational", non-feature titles at the format's release in December 1978.

Interferometry is a family of techniques in which waves, usually electromagnetic, are superimposed in order to extract information about the waves.[1] Interferometry is an important investigative technique in the fields of astronomy, fiber optics, engineering metrology, optical metrology, oceanography, seismology, spectroscopy (and its applications to chemistry), quantum mechanics, nuclear and particle physics, plasma physics, remote sensing, biomolecular interactions, surface profiling, microfluidics, mechanical stress/strain measurement, and velocimetry.

Interferometers are widely used in science and industry for the measurement of small displacements, refractive index changes and surface irregularities. In analytical science, interferometers are used in continuous wave Fourier transform spectroscopy to analyze light containing features of absorption or emission associated with a substance or mixture. An astronomical interferometer consists of two or more separate telescopes that combine their signals, offering a resolution equivalent to that of a telescope of diameter equal to the largest separation between its individual elements. 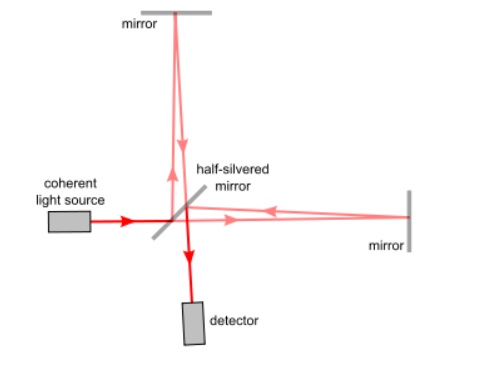 The light path through a Michelson interferometer. The two light rays with a common source combine at the half-silvered mirror to reach the detector. They may either interfere constructively (strengthening in intensity) if their light waves arrive in phase, or interfere destructively (weakening in intensity) if they arrive out of phase, depending on the exact distances between the three mirrors.

Interferometry makes use of the principle of superposition to combine waves in a way that will cause the result of their combination to have some meaningful property that is diagnostic of the original state of the waves. This works because when two waves with the same frequency combine, the resulting pattern is determined by the phase difference between the two waves—waves that are in phase will undergo constructive interference while waves that are out of phase will undergo destructive interference. Most interferometers use light or some other form of electromagnetic wave.[2]:3–12