According to the consistent performance by the robots in industries, the robot programming can be divided in two common types such as: · Leadthrough Programming Method · Textual Robot Languages

According to the consistent performance by the robots in industries, the robot programming can be divided in two common types such as:

During this programming method, the traveling of robots is based on the desired  movements, and it is stored in the external controller memory. There are two modes of a control system in this method such as a run mode and teach mode. The program is taught in the teach mode, and it is executed in the run mode. The leadthrough programming method can be done by two methods namely: 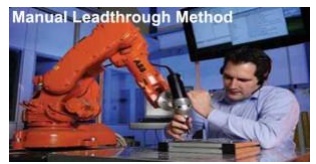 The powered leadthrough is the common programming method in the industries. A teach pendant is incorporated in this method for controlling the motors available in the joints. It is also used to operate the robot wrist and arm through a sequence of points. The playback of an operation  is done  by  recording  these  points. The  control  of  complex geometric  moves is difficultto perform  in  the  teach  pendant.  As a  result,  this  method  is good  for point  to point movements. Some of the key applications are spot welding, machine loading & unloading, and part transfer process.

In this method,endeffector theismoved robot’sphysicallybythe programmer at the desired movements. Sometimes, it may be difficult to move large robot arm manually. To get rid of it ateach button is implemented in the wrist for special programming. The manual leadthrough method is also known as Walk Through method. It is mainly used to perform continuous path movements. This method is best for spray painting and arc welding operations.

In 1973, WAVE language was developed, and it is the first textual  robot language as well. It is used to interface the machine vision system with the robot. Then AL language was introduced in 1974 for controlling multiple robot arms during arm coordination. VAL was nvented in 1979, and it is the common textual robot language. Later, this language was dated in 1984, and called as VAL II. The IBM Corporation has established their two own languages such as AMLand AUTOPASS, which is used for the assembly operations.