Motion Commands and the Control of Effectors of Robot

Real-time systems are slaves to the clock. They achieve the illusion of smooth behavior by rapidly updating a set of control signals many times per second.

Motion Commands and the Control of Effectors

Real-time systems are slaves to the clock. They achieve the illusion of smooth behavior by rapidly updating a set of control signals many times per second. For example, to smoothly turn a robot's head to the right, the head must accelerate, travel at constant velocity for a while, and then decelerate. This is accomplished by making many small adjustments to the motor torques. Another example: to get the robot's LEDs to blink repeatedly, they must be turned on for a certain period of time, then turned off for another length of time, and so forth. To get them to glow steadily at medium intensity, they must be turned on and off very rapidly.

The robot's operating system updates the states of all the effectors (servos, motors, LEDs, etc.) every few milliseconds. Each update is called a "frame", and can accommodate simultaneous changes to any number of effectors. On the AIBO, updates occur every 8 milliseconds and frames are buffered four at a time, so the application must have a new buffer available every 32 milliseconds; other robots may use different update intervals. In Tekkotsu these buffers of frames are produced by the MotionManager, whose job is to execute a collection of simultaneously active MotionCommands (MCs) of various types every few milliseconds. The results of these MotionCommands are assembled into a buffer that is passed to the operating system (Aperios for the AIBO, or Linux for other robots).

Suppose we want the robot to blink its LEDs on and off at a rate of once per second. What we need is a MotionCommand that will calculate new states for the LEDs each time the MotionManager asks for an update. LedMC, a subclass of both MotionCommand and LedEngine, performs this service. If we create an instance of LedMC, tell it the frequency at which to blink the LEDs, and add it to the MotionManager's list of active MCs, then it will do all the work for us. There's just one catch: our application is running in the Main process, while the MotionManager runs in a separate Motion process. This is necessary to assure that potentially lengthy computations taking place in Main don't prevent Motion from running every few milliseconds. So how can we communicate with our MotionCommand while at the same time making it available to the MotionManager? 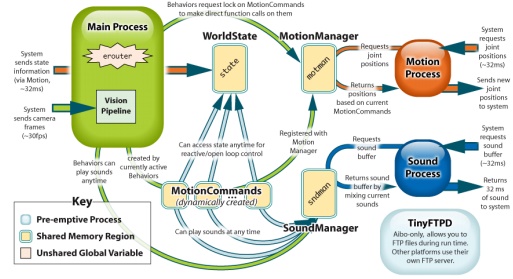