The nitrogenous bases include adenine (A), guanine (G), cytosine (C) and uracil (U).

RNAs, the second most abundant form of nucleic acids inside the cell are single-stranded and composed of nucleotides with ribose as their sugar. The major role of RNA is in protein synthesis as it aids in transfer of information from nucleus to cytosol, decoding, and synthesis of proteins. RNA nucleotides contain three components.

The nitrogenous bases include adenine (A), guanine (G), cytosine (C) and uracil (U).

Eventhough RNA is single-stranded, it has the ability to form three-dimensional structures like hairpin loops by base pairing within the strand. Adenine pairs with uracil (A=U) and guanine pairs with cytosine (G‡C). Chargaff ’s rule is not followed by RNA.

There are three major types of RNAs in all prokaryotic and eukaryotic cells. They are (1). Messenger RNA (mRNA). (2). Transfer RNA (tRNA) (3). Ribosomal RNA (rRNA). They differ from each other by size, shape, formation and stability.

They are named so because they carry the information from nucleus to cytosol. It accounts for 1-5% of cellular RNA. They do not have specific secondary structure like helices. They are single stranded linear molecules. They consist of 1000-10,000 nucleotides. They have a free or phosphorylated 3΄and 5΄end. They have different life span ranging from few minutes to days.

Intrastrand base pairing among complementary bases allows folding of the linear molecule. As a result, haripin or loop like secondary structure is formed.

o  mRNA is a direct carrier of genetic information from the nucleus to cytoplasm.

o  It contains information required for the synthesis of protein molecules.

It accounts for 10-15% of total cell RNA. Usually they consist of 50-100 nucleotides. They are single stranded molecules.They contain unusual bases such as methylated adenine, thymine, dihydrouracil and pseudouridine. These unusual bases are unique to tRNA. Intra-chain base pairing is observed with many base pairs, while some bases are not involved in base pairing, resulting in loops and arms formation in tRNA. These foldings in the primary structure generates a clover-leaf secondary structure (Figure 7.10). 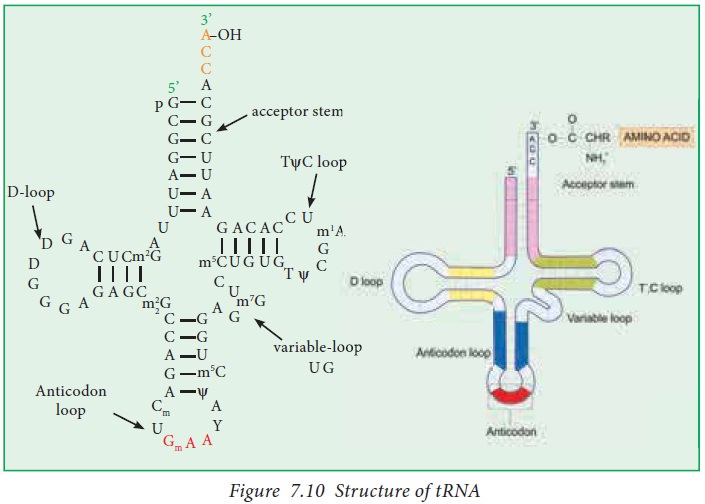 The important features of the clover-leaf structure are,

·     An acceptor arm with base sequence “CCA” is present at the 3΄end. The hydroxyl group of adenosine moiety of tRNA is responsible for getting amino acylated.

·     An anticodon arm which recognises codon on mRNA is present.

·     A TψC loop which contain an unusual base pseudouracil.

·     A D - arm which contain many dihydrouracil residues.

·     It is the carrier of amino acids to the site of protein synthesis.

·     There is at least one t-RNA molecule to each of 20 amino acids required for protein synthesis.

Ribosomal RNA accounts for 80% of the total cellular RNA. It is present in ribosomes in combination with proteins. It is known as ribonucleoprotein. The length of rRNA ranges from100-600 nucleotides. rRNA molecules have a secondary structure. Intra-strand base pairing between complementary bases often generate double helical segments or loops.

·     They are required for the formation of ribosomes.

·     They are involved in the initiation of protein synthesis.