Nucleic acids are very long, thread-like polymers, made up of a linear array of monomers called nucleotides held together by phosphodiester bridges. Nucleotides have three characteristic components (i) Base (ii) Sugar (iii) Phosphate group.

The bases of nucleic acids are heterocyclic, containing aromatic ring in their structures. They may be monocyclic pyrimidines or bicyclic purines.

·     Pyrimidines are basic in nature.  They are less soluble in water.

·     They absorb UV light at 260 nm. This property is used to detect and estimate DNA and RNA in biological solutions.

·     They are capable of forming hydrogen bonds with purine nucleotides in nucleic acids.

Purine is a bicyclic ring formed by fusion of pyrimidine ring with imidazole ring. Purine ring is numbered in the anti-clockwise fashion. Adenine (6-amino purine) and guanine (2-amino-6-oxy purine), the two common purines, are found in both DNA and RNA (Figure 7.2 ). Other naturally occurring purine derivatives include hypoxanthine, xanthine, and uric acid. Hypoxanthine and xanthine are found only rarely as constituents of RNA, while they are intermediates (compounds formed in the synthetic pathway) in the synthesis of nucleic acids Uric acid is the catabolic end product of nucleic acids. 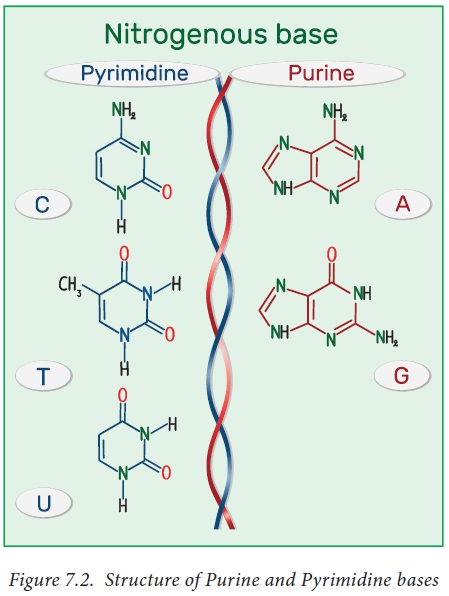 ·     Purines are basic in nature. They are sparingly soluble in water.

·     They also absorb UV light at 260 nm. This property is used to detect and estimate DNA and RNA in biological solutions.

·     They are capable of forming hydrogen bonds with pyrimidine nucleotides in nucleic acids. 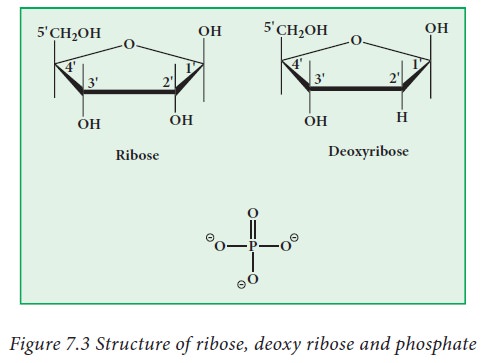 Phosphoric acid forms phospho-diester linkage between nucleosides. Based on the number of phosphate group present in the nucleotide, they are classified as monophosphates, diphosphates and triphosphates.