In 1953, J.D. Watson and F.H.C. Crick proposed a precise three dimensional model of DNA structure based on model building studies, base composition and X-ray diffraction studies carried out by Maurice Wilkins and Rosalind Franklin. This model is popularly known as the DNA double helix (Figure7.6).

There are three forms of DNA – A, B and Z DNA. The characteristics of each form of DNA is listed in the table given below.

2. Salient features of the structure of DNA

The B form DNA, also known as the Watson- Crick DNA is the most stable and prevalent form of DNA. The important structural features of B- DNA are : 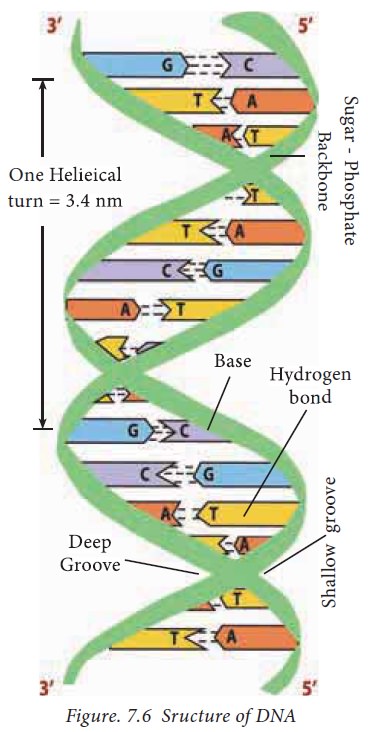 ·     Tvhere are two polynucleotide chains in the DNA spirally twisted around each other to form a right handed double helix. 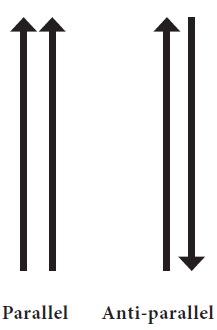 ·     The sugar-phosphate backbones remain on the outside, while the core of the helix contains the purine and pyrimidine bases.

·     Each polynucleotide chain is made up of four different bases.  The purine bases present in DNA are adenine and guanine and the pyrimidine bases present are thymine and cytosine. The sequence of purine and pyrimidine carry the genetic information whereas the sugar and phosphate groups perform the structural role.

·     The two strands run in opposite direction (i.e.) they are antiparallel.

·     The two strands are held together by hydrogen bonds (base pairing) between the purine and pyrimidine bases of the opposite strands.

Watson and Crick deduced the rules of base pairing (Fig. 7.7). They are:

·     The purine adenine (A) always pairs with the pyrimidine thymine (T).

Base pairing is achieved through hydrogen bonding. 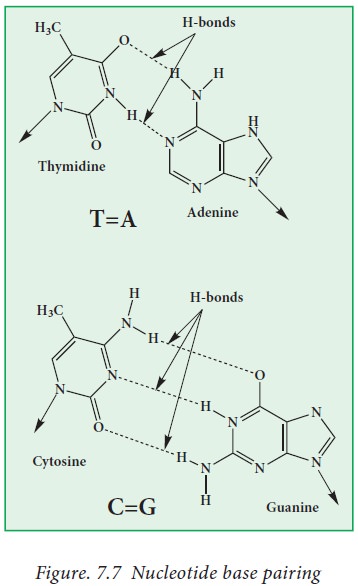 Erwin Chargaff, a scientist analyzed the chemical composition of DNA isolated from different species and found that irrespective of the source, the molar concentration of Adenine always equals Thymine and the molar concentration of Guanine always equals Cytosine. A=T and G=C. Therefore, A + T = G + C and the ratio of A+T /G+C = 1.0,which means that the total number of purine bases = the total number of pyrimidine bases.