DNA is the genetic material of all living organisms except for RNA viruses like HIV.

Frederick Griffith conducted experiments in 1928 with Streptococcus pneumoniae, which was the milestone for discovery of DNA as the genetic material. There are two different strains of Streptococcus pneumoniae, one with smooth shiny colonies called the S strain, while the other with rough colonies (R). The difference is due to the presence of mucous coat in S strain bacteria, whereas the R strain bacteria lacked them. Because of the presence of the mucous coat, S strain is lethal, while R strain is not lethal.

Griffith injected both S and R strains to two different groups of mice separately. The group which was infected with the S strain developed pneumonia and died while that infected with the R strain stayed alive.

Next, Griffith heat-killed the S strain bacteria and injected into mice, but the mice stayed alive, which suggests that heat killed S- strain are avirulent (inefficient to cause the disease). Then, he mixed the heat-killed S and live R strains and injected into the mice. The mice died. In addition, he found living S strain bacteria in dead mice (Fig. 7.9). This suggests that some transforming principle is present in the S form that has mediated the transformation of R form to S form. Later, the experiments conducted by Avery, Macleod and Mc Carty in1944 showed that the transforming principle is DNA, which carries the genetic information from one generation to another. 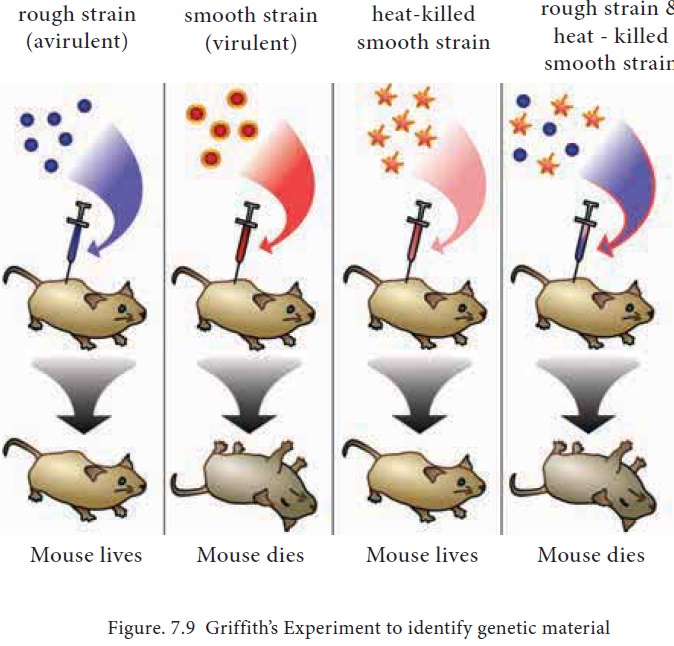 ·     DNA is the genetic material of all living organisms except for RNA viruses like HIV. It is the greatest super chip and enormous data can be stored in high density.

·     DNA inside the zygote contains all the information required for developing into an individual organism.

·     DNA inherited from their parents is responsible for the characteristic features of an individual, i.e. shape of the eyes, ears, nose, colour of the skin, height, longevity, ability to withstand stress, certain congenital diseases like diabetes and hypertension.