Respiration involves exchange of gases between the organism and the external environment. The plants obtain oxygen from their environment and release carbon dioxide and water vapour. This exchange of gases is known as external respiration . It is a physical process. Biochemical process occurs within cells where the food is oxidized to obtain energy, this is known as cellular respiration 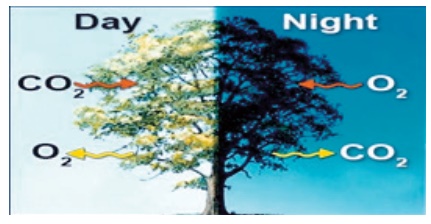 Aerobic respiration is the type of celluar respiration in which organic food is completely oxidized with the help of oxygen into carbon dioxide, water and energy. It occurs in most plants and animals.

a. Glycolysis (Glucose splitting): It is the breakdown of one molecule of glucose (6 carbon) into two molecules of pyruvic acid (3 carbon) . Glycolysis takes place in cytoplasm of the cell. It is the first step of both aerobic and anerobic respiration.

b. Krebs Cycle: This cycle occurs in mitochondria matrix. At the end of glycolysis, 2 molecules of pyruvic acid enter into mitochondria. The oxidation of pyruvic acid into CO2 and water takes place through this cycle. It is also called Tricarboxylic Acid Cycle (TCA).

c. Electron Transport Chain: This is accomplished through a system of electron carrier complex called electron transport chain (ETC) located on the inner membrane of the mitochondria. NADH2 and FADH2 molecules formed during glycolysis and Krebs cycle are oxidised to NAD+ and FAD+ to release the energy via electrons. The electrons, as they move through the system, release energy which is trapped by ADP to synthesize ATP. This is called oxidative phosphorylation. In this process, O2 the ultimate acceptor of electrons gets reduced to water.

Anaerobic respiration takes place without oxygen. Glucose is converted into ethanol (in plants) or lactate (in some bacteria)

Respiratory quotient is the ratio of volume of carbon dioxide liberated and the volume of oxygen consumed during respiration. It is expressed as