The transverse section of a dicot stem reveals the following structures.

The transverse section of a dicot stem reveals the following structures. 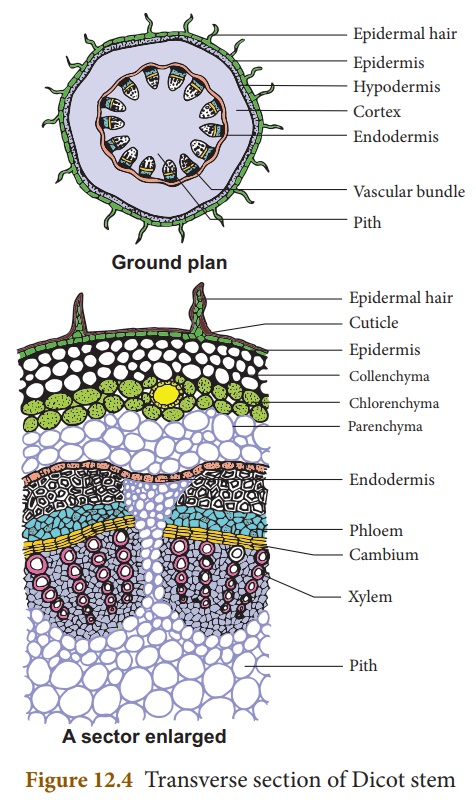 1. Epidermis: It is the outermost layer. It is made up of single layer of parenchyma cells, its outer wall is covered with cuticle. It is protective in function.

2. Cortex:- It is divided into three regions:

(i) Hypodermis: It consists of 3 - 6 layers of collenchyma cells. It gives mechanical support.

(ii) Middle cortex: It is made up of few layers of chlorenchyma cells. It is involed in photosynthesis due to the presence of chloroplast.

(iii) Inner cortex: It is made up of few layers of parenchyma cells. It helps in gaseous exchange and stores food materials.

Endodermis is the inner most layer of cortex it consists of a single layer of barrel shaped cells, these cells contain starch grains. So it is also called starch sheath.

3. Stele: The central part of the stem inner to endodermis is known as stele. It consists of pericycle, vascular bundle and pith.

(i) Pericycle: It occurs between vascular bundle and endodermis. It is multilayered, parenchymatous with alternating patches of sclerenchyma.

(iii) Pith: The large central parenchymatous zone with intercellular spaces is called pith. It helps in the storage of food materials.

Differences between Dicot and Monocot Stem 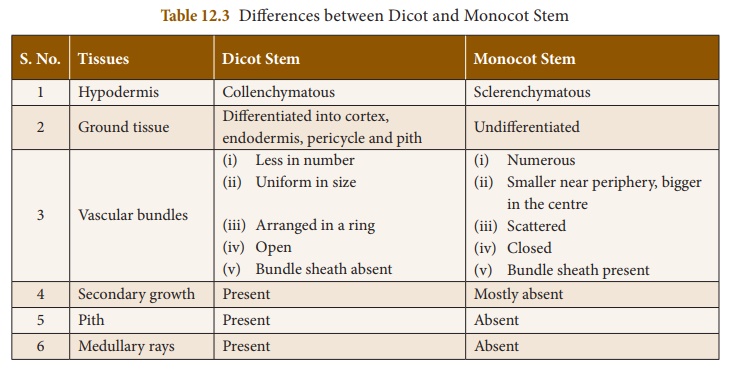