The nomenclature of rail joints depends upon the position of the sleepers or the joints.

The nomenclature of rail joints depends upon the position of the sleepers or the joints.

1 Classification According to Position of Sleepers

Three types of rail joints, come under this category.

Supported joint In this type of joint, the ends of the rails are supported directly on the sleeper. It was expected that supporting the joint would reduce the wear and tear of the rails, as there would be no cantilever action. In practice, however, the support tends to slightly raise the height of the rail ends. As such, the run on a supported joint is normally hard. There is also wear and tear of the sleeper supporting the joint and its maintenance presents quite a problem. The duplex sleeper is an example of a supported joint (Fig. 16.1).

Suspended joint In this type of joint, the ends of the rails are suspended between two sleepers and some portion of the rail is cantilevered at the joint. As a result of cantilever action, the packing under the sleepers of the joint becomes loose particularly due to the hammering action of the moving train loads. Suspended joints are the most common type of joints adopted on railway systems worldwide, including India (Fig. 16.2). 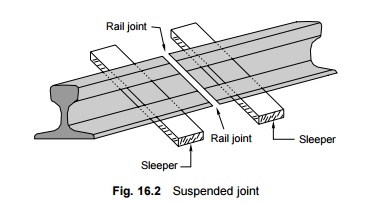 Bridge joints The bridge joint is similar to the suspended joint except that the two sleepers on either side of a bridge joint are connected by means of a metal flat [Fig. 16.3(a)] or a corrugated plate known as a bridge plate [Fig. 16.3(b)]. This type of joint is generally not used on Indian Railways. 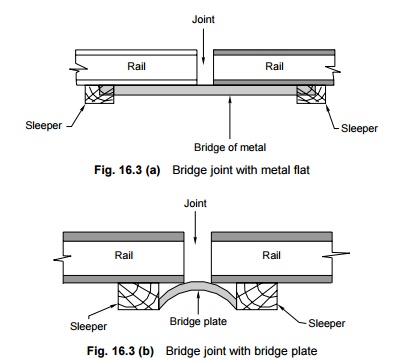 2 Classification Based on the Position of the Joint

Two types of rail joints fall in this category.

Square joint In this case, the joints in one rail are exactly opposite to the joints in the other rail. This type of joint is most common on Indian Railways (Fig. 16.4).

Staggered joint In this case, the joints in one rail are somewhat staggered and are not opposite the joints in the other rail. Staggered joints are normally preferred on curved tracks because they hinder the centrifugal force that pushes the track outward (Fig. 16.5). 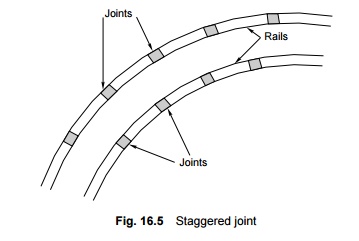