1. Coaxial Cables: This cable was invented at late 1880’s, which is used to connect the television sets to home antennas. This cable is used to transfer the information in 10 mbps. The cable is divided into thinnet and thicknet cables. These cables have a copper wire inside and insulation is covered on the top of the copper wire to provide protection to the cable. These cables are very difficult to install and maintain, because they are too big to carry and replace. The coaxial cable got its name by the word “coax”. Nowadays coaxial cables are also used for dish TV where the setup box and the television is connected using the coaxial cable only. Some of the cable names are Media Bridge 50-feet Coaxial cable, Amazon basics CL2-Rated Coaxial cables, etc. See Figure 13.2 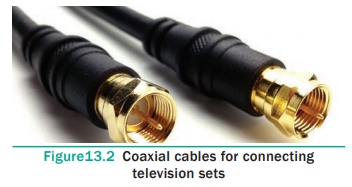 2. Twisted Pair Cables: It is type of cable with two or more insulated wires twisted together. It started with a speed of 10 mbps (10BASE-T cable is used). Then the cable was improved and the speed was higher and went to 100 mbps and the cable was renamed as 100BASE-TX. Then finally the cable was improved to 10 gbps and named as 10GBASE-T. This twisted cable has 8 wires which are twisted to ignore electromagnetic interference. The eight wires cannot be placed in a single unit as there can be difficulty in space, so it is twisted to make it one wire. There are two types of twisted pair cables, Unshielded Twisted Pair (UTP) and Shielded Twisted pair (STP). The UTP is used nowadays as modern cables for Internet and they are lower in cost and installation and maintenance is easy compared to the coaxial cables. STP is similar to UTP, but it is covered by an additional jacket to protect the wires from External interference. See Figure 13.3 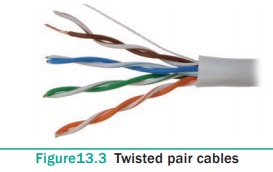 3. Fiber Optics: This cable is different from the other two cables. The other two cables had an insulating material outside and the conducting material like copper inside. But in this cable it is strands of glass and pulse of light is used to send the information. They are mainly used in Wide Area Network (WAN). The WAN is a network that extends to very large distance to connect the computers. One example of WAN is Internet. These cables are placed in deep underground to avoid any damage to the cables. The optic cable uses light to transmit the information from one place to another. There are two types of fiber optic cables available, One is single-mode (100BaseBx) another one is Multimode (100BaseSX). Single-mode cables are used for long distance transmission and at a high cost whereas the multimode cables are used for short distance transmission at a very low cost. The optic cables are easy to maintain and install. See Figure 13.4 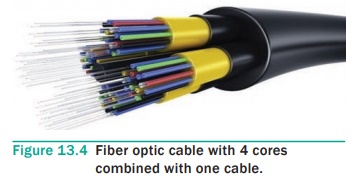 4. USB Cables: The Universal Serial Bus are used to connect keyboard, mouse and other peripheral devices. But there are some special network devices used to connect the Internet through the USB called dongles. The dongle is a small peripheral device which has a compatible of mobile broadband with a slim slot in it and connects the Internet and acts as a modem to the computer. See Figure 13.5

Micro USB is a miniaturized version of the USB used for connecting mobile devices such as smart phones, GPS devices and digital cameras.

5. Serial and Parallel cables: Earlier in 1980s to 1990s the Ethernet and the USB were not developed. Then the Serial and Parallel interface cables were used to connect the Internet to the system. They were sometime used for PC to PC networking. Before the USB emerged, the system will have both serial port and parallel port. The serial port will send 1 bit at one time whereas the parallel port will send 8 bit at one time. The parallel cables are used to connect to the printer and other disk drivers. RS232 is one type of serial cable, also known as Null modem cable. See Figure 13.6 6. Ethernet Cables: Ethernet cable is the most common type of network cable mainly used for connecting the computers or devices at home or office. This cable connects wired devices within the local area network (LAN) for sharing the resources and accessing Internet. 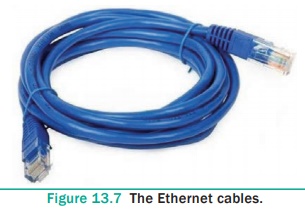 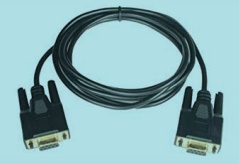