There are three types of wiring techniques to construct the Ethernet cable. It is also known as color coding techniques. They are ● Straight-Through Wiring ● Cross-over Wiring ● Roll-over Wiring

There are three types of wiring techniques to construct the Ethernet cable. It is also known as color coding techniques. They are

In general, the Ethernet cables used for Ethernet connections are “straight-through cables”. These cable wires are in the same sequence at both ends of the cable, which means that pin 1 of the plug on one end is connected to pin 1 of the plug on the other end (for both standard – T568A & T568B). the straight through wiring cables are mostly used for connecting PC / NIC card to a hub. This is a simple physical connection used in printers, computers and other network interfaces. See Figure 13.19 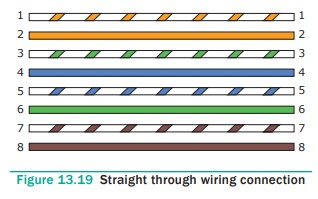 If you require a cable to connect two computers or Ethernet devices directly together without a hub, then you will need to use a Crossover cable instead. Then the pairs(Tx and Rx lines) will be crossed which means pin 1 & 2 of the plug on one end are connected with pin 3 & 6 of the plug on other end, and vice versa (3 & 6 to pin 1 & 2).

The easiest way to make a crossover cable is to make one end to T568A colour coding and the other end to T568B. Another way to make the cable is to remember the colour coding used in this type. Here Green set of wires at one end are connected with the Orange set of wires at another end and vice versa. Specifically, connect the solid Green (G) with the solid Orange, and connect the green/white with the orange/white. See Figure 13.20 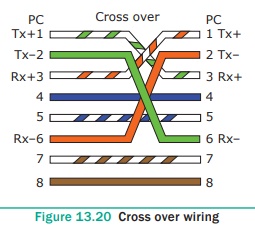 Rollover cable is a type of null-modem cable that is often used to connect a device console port to make programming changes to the device. The roll over wiring have opposite pin arrangements, all the cables are rolled over to different arrangements. In the rollover cable, The coloured wires are reversed on other end i.e. The pins on one end are connected with other end in reverse order (i.e. pin 1 to 8, 2 to 7, 3 to 6, 4 to 5, 5 to 4, 6 to 3, 7 to 2, 8 to 1).

Rollover cable is also known as Yost cable or Console cable. It is typically flat (and light blue color) to distinguish it from other types of network cabling. 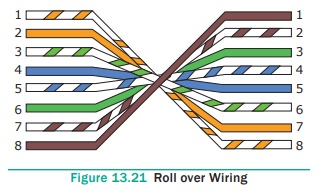 How to determine the type of Ethernet cables?

Straight-through: The coloured wires are in the same sequence at both ends of the cable.

Roll-over: The coloured wires are in the opposite sequence at either end of the cable.