Once the basics of computer was invented by Charles Babbage, people started inventing much newer technology compatible with the computer.

Once the basics of computer was invented by Charles Babbage, people started inventing much newer technology compatible with the computer. In the 19th Century the US military base had much technology to serve weapons and people but they did not have any technology to send a report from one place to another. Then slowly the word network grew bigger and bigger. Then the Advanced Research Projects Agency Network (ARPANET) was invented and the TCP/IP was adopted with ARPANET. Then the researchers began to research the “network of networks”.

First the network was within one computer to another computer, then it moved to one place to another place, then one city to another, then slowly it grew up and became one as Internet. The essential service of Internet is WWW (World Wide Web) which was invented by Tim Berners Lee. Internet can be accessed easiliy from anywhere but the setting up of the network is a big nightmare. Still network cables are being used worldwide to produce a faster Internet to the people. The network cables are used to transfer the data from one device to another device. 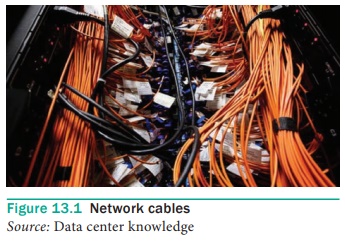 In the figure 13.1 huge and huge cables are used during network cabling. This Causes lot of confusion which cable to be connected and therefore alternatives to replace this are in process.