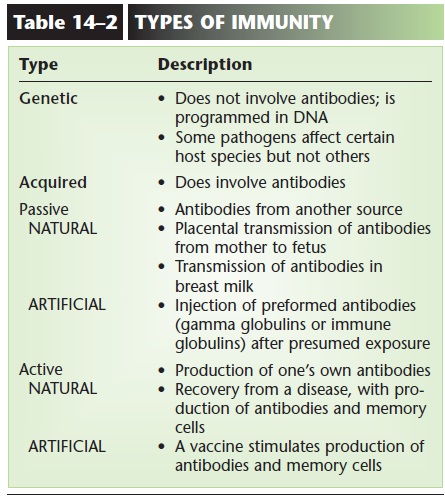 Genetic immunity does not involve antibodies or the immune system; it is the result of our genetic makeup. What this means is that some pathogens cause disease in certain host species but not in others.

Dogs and cats, for example, have genetic immunity to the measles virus, which is a pathogen only for peo-ple. Mouse leukemia viruses affect only mice, not people; we have genetic immunity to them. This is not because we have antibodies against these mouse viruses, but rather that we have genes that are the codes for proteins that make it impossible for such pathogens to reproduce in our cells and tissues. Monkeys have similar protective genes and proteins for the human AIDS virus; HIV does not cause disease in these monkeys. Because this is a genetic character-istic programmed in DNA, genetic immunity always lasts a lifetime.

Artificially acquired passive immunity is obtained by the injection of immune globulins (gamma globu-lins or preformed antibodies) after presumed exposure to a particular pathogen. Such immune globulins are available for German measles, hepatitis A and B, tetanus and botulism (anti-toxins), and rabies. These are not vaccines; they do not stimulate immune mech-anisms, but rather provide immediate antibody pro-tection. Passive immunity is always temporary, lasting a few weeks to a few months, because antibodies from another source eventually break down.

The types of immunity are summarized in Table 14–2.