Lymphatic tissue consists mainly of lymphocytes in a mesh-like framework of connective tissue.

Lymphatic tissue consists mainly of lymphocytes in a mesh-like framework of connective tissue. Recall that most lymphocytes are produced from stem cells in the red bone marrow, then migrate to the lymph nodes and nodules, to the spleen, and to the thymus. In these structures, lymphocytes become activated and prolif-erate in response to infection (this is a function of all lymphatic tissue). The thymus has stem cells that pro-duce a significant portion of the T lymphocytes.

Lymph nodes and nodules are masses of lymphatic tissue. Nodes and nodules differ with respect to size and location. Nodes are usually larger, 10 to 20 mm in length, and are encapsulated; nodules range from a fraction of a millimeter to several millimeters in length and do not have capsules.

Lymph nodes are found in groups along the path-ways of lymph vessels, and lymph flows through these nodes on its way to the subclavian veins. Lymph enters a node through several afferent lymph vessels and leaves through one or two efferent vessels (Fig. 14–4). 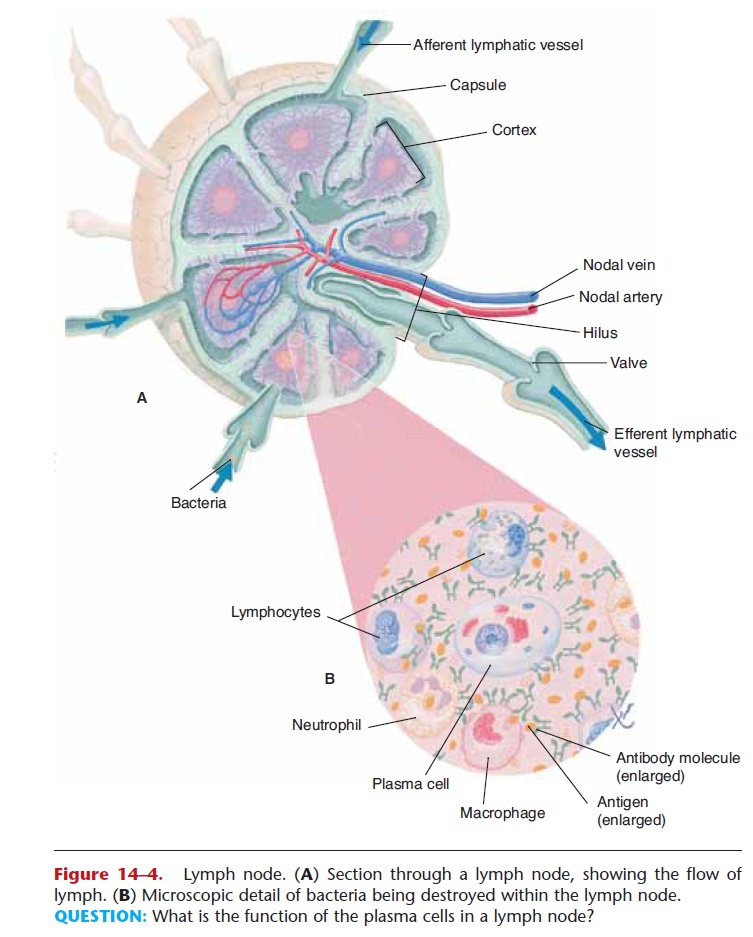 Figure 14–4. Lymph node. (A) Section through a lymph node, showing the flow of lymph. (B) Microscopic detail of bacteria being destroyed within the lymph node. QUESTION: What is the function of the plasma cells in a lymph node?

As lymph passes through a lymph node, bacteria and other foreign materials are phagocytized by fixed (sta-tionary) macrophages. Plasma cells develop from lymphocytes exposed to pathogens in the lymph and produce antibodies. These antibodies will eventually reach the blood and circulate throughout the body.

There are many groups of lymph nodes along all the lymph vessels throughout the body, but three paired groups deserve mention because of their strate- gic locations. These are the cervical, axillary, and inguinal lymph nodes (see Fig. 14–3). Notice that these are at the junctions of the head and extremities with the trunk of the body. Breaks in the skin, with entry of pathogens, are much more likely to occur in the arms or legs or head rather than in the trunk. If these pathogens get to the lymph, they will be destroyed by the lymph nodes before they get to the trunk, before the lymph is returned to the blood in the subclavian veins. 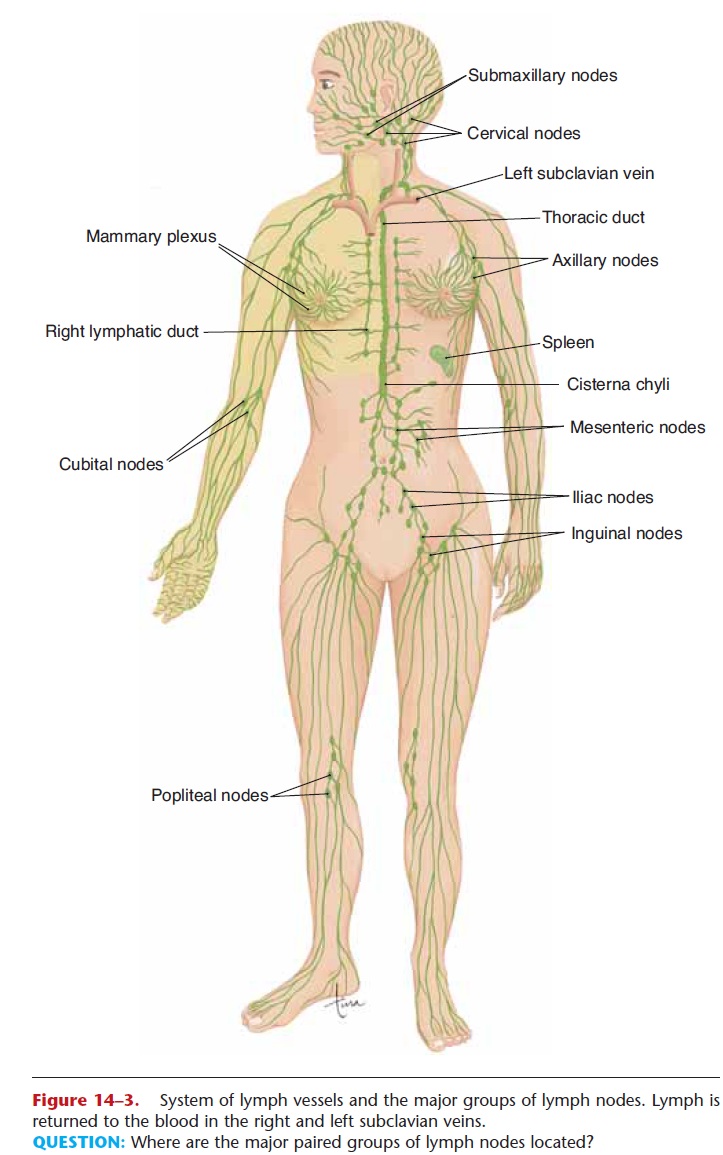 Figure 14–3. System of lymph vessels and the major groups of lymph nodes. Lymph is returned to the blood in the right and left subclavian veins.

QUESTION: Where are the major paired groups of lymph nodes located?

You may be familiar with the expression “swollen glands,” as when a child has a strep throat (an inflam-mation of the pharynx caused by Streptococcus bacteria). These “glands” are the cervical lymph nodes that have enlarged as their macrophages attempt to destroy the bacteria in the lymph from the pharynx.

Lymph nodules are small masses of lymphatic tis-sue found just beneath the epithelium of all mucous membranes. The body systems lined with mucous membranes are those that have openings to the envi-ronment: the respiratory, digestive, urinary, and repro-ductive tracts. You can probably see that these are also strategic locations for lymph nodules, because any nat-ural body opening is a possible portal of entry for pathogens. For example, if bacteria in inhaled air get through the epithelium of the trachea, lymph nodules with their macrophages are in position to destroy these bacteria before they get to the blood.

Some of the lymph nodules have specific names. Those of the small intestine are called Peyer’s patches, and those of the pharynx are called tonsils. The palatine tonsils are on the lateral walls of the pharynx, the adenoid (pharyngeal tonsil) is on the pos-terior wall, and the lingual tonsils are on the base of the tongue. The tonsils, therefore, form a ring of lym-phatic tissue around the pharynx, which is a common pathway for food and air and for the pathogens they contain. A tonsillectomy is the surgical removal of the palatine tonsils and the adenoid and may be per-formed if the tonsils are chronically inflamed and swollen, as may happen in children. As mentioned ear-lier, the body has redundant structures to help ensure survival if one structure is lost or seriously impaired. Thus, there are many other lymph nodules in the pharynx to take over the function of the surgically removed tonsils.

The spleen is located in the upper left quadrant of the abdominal cavity, just below the diaphragm, behind the stomach. The lower rib cage protects the spleen from physical trauma (see Fig. 14–3).

In the fetus, the spleen produces red blood cells, a function assumed by the red bone marrow after birth. After birth the spleen is very much like a large lymph node, except that its functions affect the blood that flows through it rather than lymph.

The functions of the spleen after birth are:

2. Contains fixed macrophages (RE cells) that phago-cytize pathogens or other foreign material in the blood. The macrophages of the spleen also phago-cytize old red blood cells and form bilirubin. By way of portal circulation, the bilirubin is sent to the liver for excretion in bile.

3. Stores platelets and destroys them when they are no longer useful.

The spleen is not considered a vital organ, because other organs compensate for its functions if the spleen must be removed. The liver and red bone marrow will remove old red blood cells and platelets from cir-culation. The many lymph nodes and nodules will phagocytize pathogens (as will the liver) and have lym-phocytes to be activated and plasma cells to produce antibodies. Despite this redundancy, a person without a spleen is somewhat more susceptible to certain bac-terial infections such as pneumonia and meningitis.

The thymus is located inferior to the thyroid gland. In the fetus and infant, the thymus is large and extends under the sternum (Fig. 14–5). With increasing age, the thymus shrinks, and relatively little thymus tissue is found in adults, though it is still active. 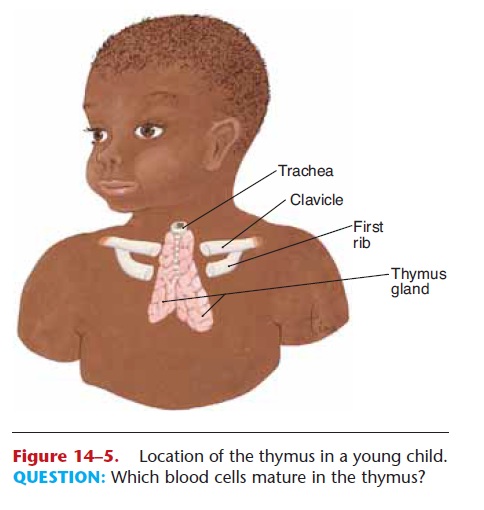 Figure 14–5. Location of the thymus in a young child. QUESTION: Which blood cells mature in the thymus?

The stem cells of the thymus produce T lympho-cytes or T cells; their functions are discussed in the next section. Thymic hormones are necessary for what may be called “immunological competence.” To be competent means to be able to do something well. The thymic hormones enable the T cells to participate in the recognition of foreign antigens and to provide immunity. This capability of T cells is established early in life and then is perpetuated by the lympho cytes themselves. The newborn’s immune system is not yet fully mature, and infants are more susceptible to certain infections than are older children and adults. Usually by the age of 2 years, the immune sys-tem matures and becomes fully functional. This is why some vaccines, such as the measles vaccine, are not recommended for infants younger than 15 to 18 months of age. Their immune systems are not mature enough to respond strongly to the vaccine, and the protection provided by the vaccine may be incom-plete.