Innate immunity has several aspects: anatomic and physiological barriers, phagocytic and other defensive cells, and chemical secretions and reactions, including inflammation.

Innate immunity has several aspects: anatomic and physiological barriers, phagocytic and other defensive cells, and chemical secretions and reactions, including inflammation. These are not separate and distinct; rather there is a great deal of overlap among them, as you will see. The innate immune responses are always the same, and their degree of efficiency does not increase with repeated exposure.

The stratum corneum of the epidermis of the skin is non-living, and when unbroken is an excellent barrier to pathogens of all kinds. The fatty acids in sebum help limit the growth of bacteria on the skin. The liv-ing cells of the epidermis produce defensins, which are antimicrobial chemicals. The mucous membranes of the respiratory, digestive, urinary, and reproductive tracts are living tissue, yet still a good barrier. The ciliated epithelium of the upper respiratory tract is an especially effective barrier. Dust and pathogens are trapped on the mucus, the cilia sweep the mucus to the pharynx, and it is swallowed. The hydrochloric acid of the gastric juice destroys most pathogens that enter the stomach, either in mucus or with food and drink. Lysozyme, an enzyme found in saliva and tears, inhibits the growth of bacteria in the oral cavity and on the warm, wet surface of the eye. The subcuta-neous tissue contains many white blood cells (WBCs), as does the areolar connective tissue below the epithe-lium of mucous membranes.

Recall that many of our defensive cells are white blood cells. Macrophages, both fixed and wandering, have receptors for the pathogens humans are likely to encounter (this probably reflects millions of years of coexistence) and are very efficient phagocytes. Other cells capable of phagocytosis of pathogens or other foreign antigens are the neutro-phils and, to a lesser extent, the eosinophils. Phago-cytic cells use intracellular enzymes and chemicals such as hydrogen peroxide (H2O2) to destroy ingested pathogens.

The Langerhans cells of the skin, and other den-dritic cells throughout the body, also phagocytize for-eign material, not merely to destroy it, but to take it to a lymph node where the lymphocytes of adaptive immune mechanisms are then activated. The macro-phages are also involved in activating these lympho-cytes. This is a very important link between the two components of immunity.

Natural killer cells (NK cells) circulate in the blood but are also found in the red bone marrow, spleen, and lymph nodes. They are a small portion (about 10%) of the total lymphocytes, but are able to destroy many kinds of pathogens and tumor cells. NK cells make direct contact with foreign cells, and kill them by rupturing their cell membranes (with chemi-cals called perforins) or by inflicting some other kind of chemical damage.

Basophils and mast cells (a type of connective tissue cell) are also defensive cells that are found throughout areolar connective tissue. They produce histamine and leukotrienes. Histamine causes vasodilation and makes capillaries more permeable; these are aspects of inflammation. Leukotrienes also increase capillary permeability and attract phagocytic cells to the area.

Chemicals that help the body resist infection include the interferons, complement, and the chemicals involved in inflammation. Theinterferons (alpha-, beta-, and gamma-interferons) are proteins produced by cells infected with viruses and by T cells. Viruses must be inside a living cell to reproduce, and although interferon cannot prevent the entry of viruses into cells, it does block their reproduction. When viral reproduction is blocked, the viruses cannot infect new cells and cause disease. Interferon is probably a factor in the self-limiting nature of many viral diseases (and is used in the treatment of some diseases, such as hep-atitis C).

Complement is a group of more than 20 plasma proteins that circulate in the blood until activated. They are involved in the lysis of cellular antigens and the labeling of noncellular antigens. Some stimulate the release of histamine in inflammation; others attract WBCs to the site.

Inflammation is a general response to damage of any kind: microbial, chemical, or physical. Basophils and mast cells release histamine and leukotrienes, which affect blood vessels as previously described. Vasodilation increases blood flow to the damaged area, and capillaries become more permeable; tissue fluid and WBCs collect at the site. The purpose of inflam-mation is to try to contain the damage, keep it from spreading, eliminate the cause, and permit repair of the tissue to begin. From even this brief description you can see why the four signs of inflammation are redness, heat, swelling, and pain: redness from greater blood flow, heat from the blood and greater metabolic activ-ity, swelling from the accumulation of tissue fluid, and pain from the damage itself and perhaps the swelling.

As mentioned, inflammation is a pos-itive feedback mechanism that may become a vicious cycle of damage and more damage. The hormone cor-tisol is one brake that prevents this, and at least one of the complement proteins has this function as well. There are probably other chemical signals (in general called cytokines and chemokines) that help limit inflammation to an extent that is useful. 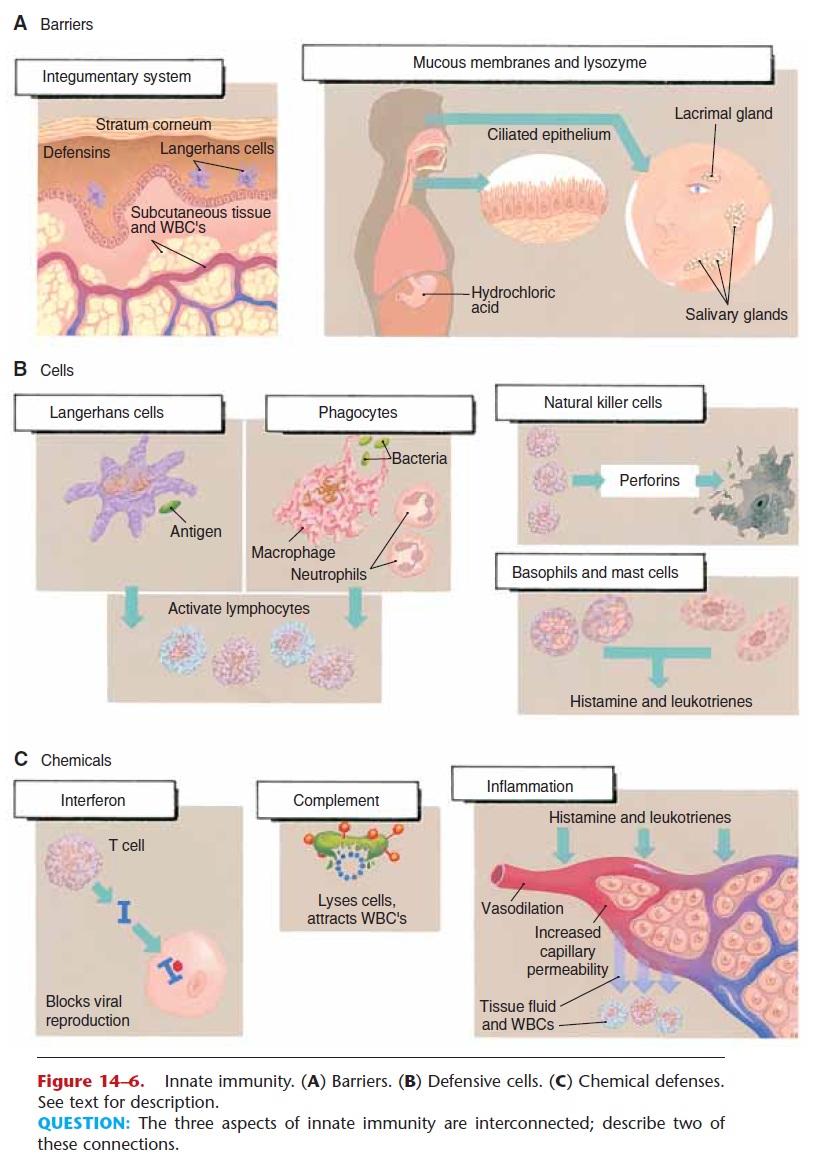 QUESTION: The three aspects of innate immunity are interconnected; describe two of these connections.