A cuisine is a cooking style denoting varieties of food prepared by a restaurant from a certain region or country.

A cuisine is a cooking style denoting varieties of food prepared by a restaurant from a certain region or country. There are different types of cuisines all over the world. Each country or region has its own style.

·        A cuisine is frequently named after the region or place where it is originated.

·        It is primarily influenced by the locally available ingredients, the religion and the culture.

·        The area’s climate determines the native foods that are available. 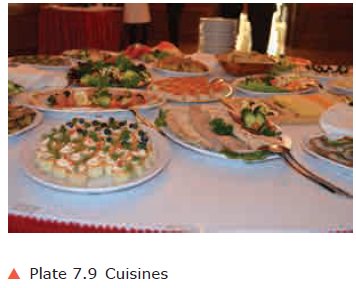 The common cuisines are Indian, International and fusion cuisine.

Indian cuisines are as diversified and unique as its culture and country encompasses a wide variety of regional and traditional cuisines. Indian food is often thought of as an ‘exotic cui-sine’ with charm of its own, it has such a great variety of taste, colour and aroma.

It is based upon national, state or local regions. Regional cuisines may vary based upon food availa-bility and trade, varying climates, cooking traditions and practices and cultural dif-ferences. Each state has evolved its very own cuisine influenced by the availabil-ity of certain raw foods of the region. The cooking style varies from region to region and it is largely divided into South Indian and North Indian cuisine.

·        There are special foods prepared for occasions like festival in all the regions.

·        A three meal balanced diet pattern is the most common feature in Indian cuisine. 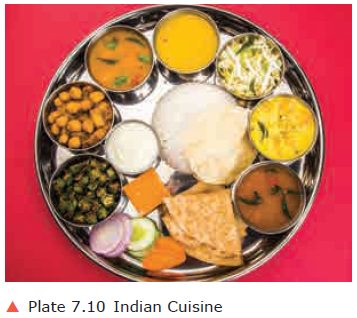 ·        Use of dried fruits and nuts is fairly common even in everyday foods.

·        Dairy products like milk, cream, cot-tage cheese, ghee and yoghurt play an important role in the cooking of both savory and sweet dishes.

·        This region is famous for tandoori roti and naans, stuffed parathas and kulchas.

·        Basmati rice in the form of jeera rice and pulaos are common.

·        Popular dishes are mutter paneer, chaat, dhokla, dhalmakhani, samosas and so on. 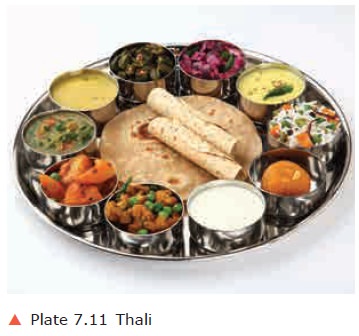 ·        The cuisines have common ingredients and differ primarily in the spiciness of the food.

·        Millets used commonly in rural areas are becoming popular in urban region too.

·        Some authentic and popular South Indian dishes like pongal, sambar and vadai are from Tamilnadu, rava idli from Karnataka, kadalai curry and appam from Kerala and kebabs and biriyani from Andhra Pradesh. 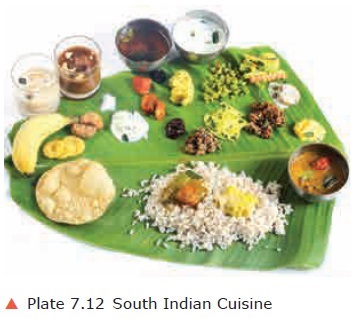 Variety of raw and parboiled rice as a sta-ple food, forms part of a typical meal in Tamilnadu, accompanied with mildly or richly spiced vegetarian and non-vegetar-ian dishes.

·        The various Tamil dishes can be cat-egorized in different groups starting from the regular meals, the light meals, snacks and desserts.

·        This cuisines conventionally include all the six tastes that any food catego-rized into sweet, sour, salt, pungent, bitter and astringent into the main meal so as to get complete nutrition and balanced digestion.

In Tamil Nadu there are different types of cuisines like Chettinad and Kongu. Some special foods like Thirunelveli halwa, Kumbakonam degree filter coffee, Ambur biriyani, Kanjeepuram idly, and Madurai Jigarthanda are also famous in Tamilnadu cuisine. 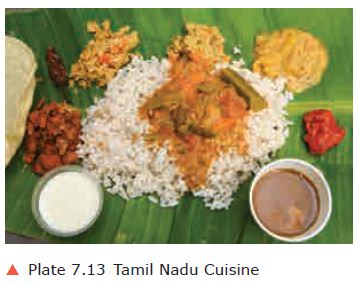 For example Traditional meals served in Chettinad style on banana leaves follow a specific protocol. Each dish has a designated space and order in which, it has to be served.

Serving of Food in Indian Cuisine

·        Etiquette of Indian dining varies with the region in India.

·        Both in urban and rural settings Indi-ans wash their hands thoroughly prior to dining, and then eat with their fin-gers, without any cutlery.

·        Traditionally Indians sit on the floor while eating.

·        Main dish (rice or chappathi), sur-rounded with other dishes are served on ‘Thali’ – a plate laid with banana leaf or stitched leaf.

·        Garnishes are very simple such as sprinkling chopped coriander leaves or grated carrots and nuts.

·        After a meal, it is common to serve small cardamom seeds with their husks, aniseeds and betel nuts.

There have been significant improvements and advances during the last century in food preservation, storage, shipping and production and today many countries, cities and regions have access to their traditional cuisines and many other global cuisine.

Some of the most popular International cuisines include French, Chinese, Italian and Mexican. Most coun-tries have a well-known famous dish or ingredient that is associated with the cuisine.

In a full course menu, for example in a French cuisine, the dinner consists of multiple dishes or courses. In its simplest form, it consists of 3 or 4 courses such as appetizers, fish, entrée (main course) and dessert.

·        French cuisine is an unique cultural experience with nutritious foods with beauty. 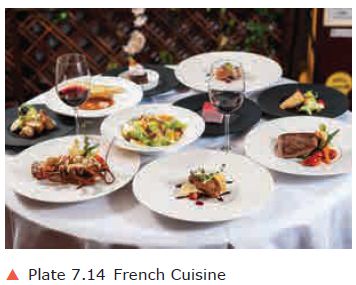 Serving of Foods in French Cuisine

·        Family style is followed in serving food with all courses on the table at the same line. 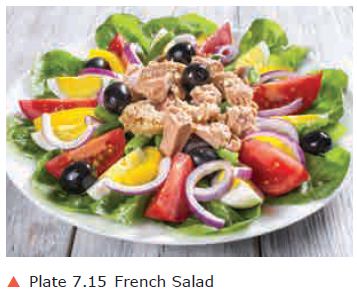 ·        Continuous service of bread is fol-lowed till the last course.

·        “Buffet” style is the variation of the French service where all food is avail-able at the correct temperature in a serving space other than dining table.

·        The dishes have balance, combination and blend of colour, flavour, texture, shape and size.

·        Ingredients are cut into beautiful shapes, yet flavor is never sacrificed. 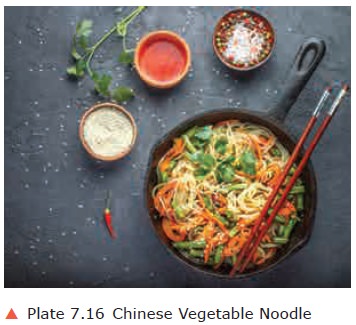 Serving of foods in Chinese Cuisine

·        It is considered inappropriate to use knives on the dining table. Chopsticks are the main eating utensils.

·        Waiters serve hot dishes one by one and usually meat dishes are served first, then vegetables. 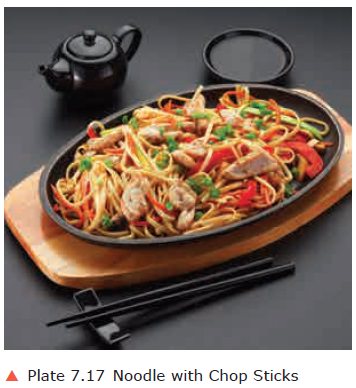 ·        Italian food is extremely regional and varies greatly from region to region.

·        Simple preparations and presentations. Heavy emphasis is given to quality of ingredients. 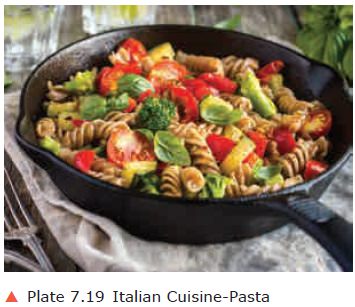 Serving of foods in Italian Cuisine

·        In  Italy,  eating  is  a  moment  of celebration­ where families, friends, colleagues, get together, relax and par-ticipate in the dining ritual.

·        Even the most informal meals include multiple courses.

·        The various courses are a way to break down the meal into different sections, to add variety and creativity.

A combination of different traditional culinary cuisines is called fusion cuisine. Cuisines of this type are not categorized according to any one particular cuisine style and have played a part in innova-tions of many contemporary cuisines. Eg: Vegetable fried rice – Indo Chinese cuisine.