Role of Microorganisms in Food

A number of microorganisms are involved in bringing about changes and are useful in the preparation of certain foods.

Role of Microorganisms in Food

1. Production of alcoholic beverages­: Yeast is used in great deal in thpreparation­  of  alcoholic  beverages such as wine, beer, brandy, fermenta-tion of milk. 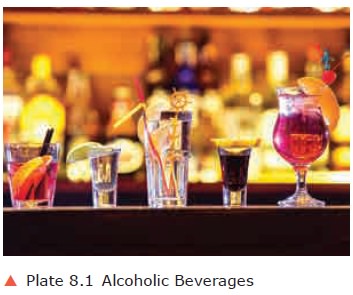 2. Preparation of coffee seeds and cocoa: Coffee berries are allowed to ferment so that pulp can be removed easily. The pulp from cocoa seeds are also re-moved by fermentation process.

3. Preparation of malt beverages: The malt beverages are prepared by the in-fusion of grains that have been subject-ed to malting (sprouting). This is also known as brewing. The enzyme in the grain converts starch into sugar pro-ducing an extract ‘Wort’. This extract can be treated with yeast to obtain the final product beer and its varieties.

4. Bread and Idli making: When yeast converts sugar into alcohol, carbon – di-oxide is formed which helps in the raising of dough in bread. In case of idli and dosa batter the yeast naturally present on the grains make the batter to raise. 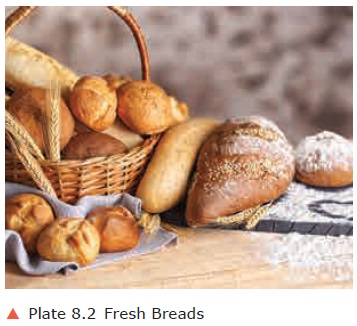 This is then packed in fluids containing salt, vinegar, sugar and different spices.

6. Vinegar: It is a solution containing acetic acid, obtained by further fer-menting alcoholic liquids with the help of the microorganism Acetobacter.

7. Milk Products: Butter and cheese are the milk products where microorganisms are utilized.

a. Butter – It is composed of fat from milk with little casein and lactose. It can be separated from fresh milk or curd. The organism Streptococcus lactis is helpful in acid forming and Leuconostoc citro-vorum is responsible for bringing fla-vour and aroma in butter. Due to the action of yeast, mould and bacteria the butter gets contaminated leading to a fishy taste and yeasty flavor.

b. Cheese – It is prepared by coagula-tion of casein present in milk. Hard cheese is prepared by removing much of the water e.g. Cheddar cheese, swiss cheese. The cheese is ripened by the microorganisms such as Streptococ-cus lactis and Streptococcus cremoris. Moulds such as Pencilliumcamemberti and Pencillium roquefort gives Cam-embert and Roquefort cheese. 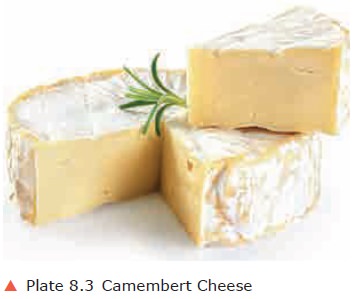 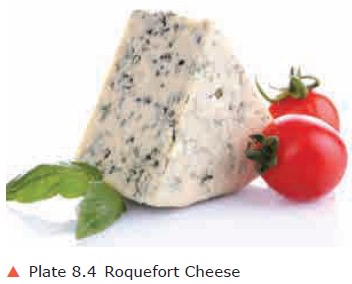 Apart from these products curd, yoghurt, ku-miss, leben and kefir are the fermented products obtained from the microbial action of milk.