Food spoilage is defined as decomposition and damage caused to food by various agents making it unfit for consumption.

Food spoilage is defined as decomposition and damage caused to food by various agents making it unfit for consumption.

‘Spoilt’ is the term used for foods which look harmful and unfit to eat. Spoilt food has an unattractive colour, smell, taste and appearance.

The term ‘contamination’ means foods which are not fit to be eaten for san-itary reasons. The foods may look good, and taste and smell good, but may contain harmful chemicals, non –food matter and bacteria.

Foods may be contaminated by air, water, plant, soil, food handler, machinery and equipment, sewage and trucks or carts during transport. Foods get spoilt due to any one or more of the following reasons: 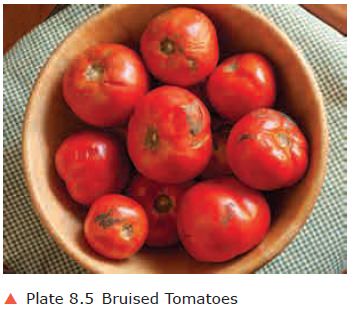 c.      Biological–changes brought about by the microorganisms and their enzymes.

a. Physical: Physical spoilage is caused by improper temperature, compact stacking which leads to change in the structure of the food.

b. Chemical: The changes are brought about by enzymes present in food (intrin-sic) or those produced by microorganisms (extrinsic) are of different kinds.

·        Proteolytic enzymes produce decom-position of proteins like meat,fish,eggs and milk.

·        Lipolytic enzymes produce a break-down of fats into fatty acids and glycerol­ that are often oxidized to per-oxides and aldehydes associated with rancidity or a bitter taste in fatty foods.

c. Biological: Biological factors that spoil food are the microorganisms like moulds, yeasts bacteria and their en-zymes which settle in food at different stages. The changes brought about in the food are mainly in the form of fermen-tation, putrefaction and decay. 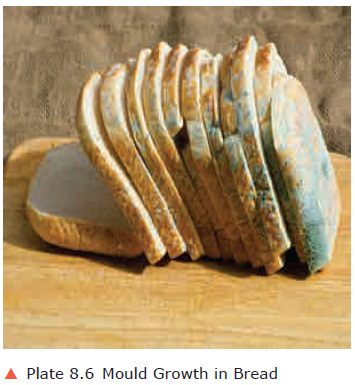 i.   Fermentation:  It is the anaerobic enzymatic­ conversion of carbohydrates into  ethyl  alcohol.  It  is  caused  by Streptococcus­ and Micrococcus.

ii. Putrefaction: It is the enzymatic de-composition of the proteins present in food with the production of foul smelling compounds such as hydrogen sulphide and ammonia. It is caused by Pseudomonas and Proteus.