Type IV hypersensitivity reactions are mediated by T cells that recognize pep-tides presented on the surface of antigen-presenting cells in the context of class II major histocompatibility complex (MHC) molecules.

Type IV hypersensitivity reactions are mediated by T cells that recognize pep-tides presented on the surface of antigen-presenting cells in the context of class II major histocompatibility complex (MHC) molecules and that produce the cytokines interferon γ (IFN-γ), interleukin 3 (IL-3), tumor necrosis factor (TNF) α, TNF-β, and granulocyte-macrophage colony-stimulat-ing factor (GM-CSF). These cells consti-tute a subset of helper T cells termed TH1 cells. Elaboration of “TH1 cytokines” leads to macrophage recruitment and activa-tion, enhanced expression of adhesion molecules, and increased production of monocytes by the bone marrow. Delayed-type hypersensitivity in response to the intradermal injection of certain antigens, such as tuberculin (used for tuberculosis skin testing), is a classic example of a type IV hypersensitivity reaction. In the case of autoimmunity, self-antigens (instead of foreign antigens) plus MHC molecules are recognized by the antigen receptors of the TH1 cells. Examples of type IV autoim-mune reactions include insulin-dependent diabetes mellitus (pancreatic antigens, such as glutamic acid dehydrogenase, insulin, and other islet cell antigens are recognized), multiple sclerosis (unidenti-fied components of myelin are recognized), experimental antoimmune encephalomy-elitis (an animal model of multiple sclero-sis in which myelin basic protein (MBP) is recognized), and Hashimoto’s thyroiditis (thyroid antigens such as thyroid peroxi-dase and thyroglobulin are recognized).

A thirty-one-year-old woman was seen in the clinic because she had a sensation that something was stuck in her throat. Her older sister had a similar problem. She also noted feeling tired and had gained weight since giv-ing birth to a child five years earlier. Her hair and skin seemed to be get-ting drier. On examination, her thyroid gland was mildly enlarged on palpa-tion (Figure 6.3A, 6.3B) and ultrasound revealed multiple small nodules and a pseudonodule indicated by the arrow (Figure 6.3C). A needle biopsy of the thyroid revealed a diffuse interstitial lymphocytic infiltrate with formation of lymphoid follicles (Figure 6.3D). Residual thyroid follicles were small, and some contained inspissated colloid. 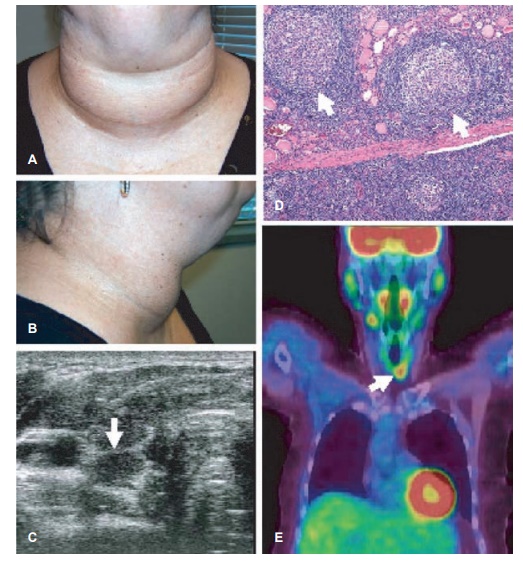 Figure 6.3 Autoimmune (Hashimoto’s) thyroiditis. A, B, Appearance of goiter (diffusely enlarged thyroid gland); C, ultrasound image showing a transverse view of the right lobe of the thyroid. The gland is diffusely hypoechoic with multiple small nodules and a pseudonodule. The arrow indicates a pseudonodule (arrow) separated from the remainder of the gland by a fibrous septum. D, hematoxylin and eosin staining of the thyroid biopsy illustrating a diffuse lymphocytic infi ltrate and the formation of well-organized ectopic lymphoid follicles (arrows). E, positron emission tomography image showing focally increased 2-[18F]fluoro-2-deoxy-D-glucose (FDG) uptake in the thyroid gland, correlating with lymphocytic infiltration.

Complete blood count was notable for mild anemia (hemoglobin 11.3 g/dl). Her T4 level was low (1.9 µg/dl), TSH level was elevated at 25 mIU/L, and serum antithyroid peroxidase and anti-thyroglobulin autoantibodies were detected. Antithyroid-stimulating hor-mone receptor antibody was negative. She was given a diagnosis of autoim-mune (Hashimoto’s) thyroiditis on the basis of the low T4 level, elevated TSH, and the autoantibody profile and was treated with thyroid replacement. Her TSH levels normalized and the ane-mia resolved and she noted a gradual decrease in her fatigue. Her skin and hair dryness improved.

Pathologically Hashimoto’s thy-roiditis represents an infiltration of the thyroid gland with T and B lympho-cytes, which often organize to form germinal centers (Figure 6.3D). The lymphocytic infiltration may be visu-alized on positron emission tomog-raphy scanning as shown in Figure 6.3E. Patients with Hashimoto’s thy-roiditis may exhibit a focal or diffusely increased 2-[18F]fluoro-2-deoxy-d-glu-cose (FDG) uptake, which correlates with the T-/B-cell infiltration. The B cells make antibodies against thy-roid antigens, as seen in this patient, whereas the T cells produce cytokines that stimulate the B cells and induce the thyroid cells to undergo apopto-sis (programmed death). Eventually, the thyroid is destroyed and is unable to secrete thyroid hormone, result-ing in hypothyroidism. The diffusely micronodular appearance on ultra-sound (Figure 6.3C) is due to disrup-tion of the normal microarchitecture of of thyroid hormone (seen as increased levels of T4), leading to hyperthyroid-ism. Eventually, this too may cause destruction of the thyroid gland, result-ing in a hypothyroid state.

The cause of Hashimoto’s thy-roiditis is unknown. There are famil-ial linkages (as seen in this patient). Other conditions that may predispose to Hashimoto’s are physical stress, radiation, viral infections, increased iodine, medications (most notably amiodarone, lithium, and interferon-α), other autoimmune diseases (most notably Sjögren’s syndrome), female gender, and pregnancy