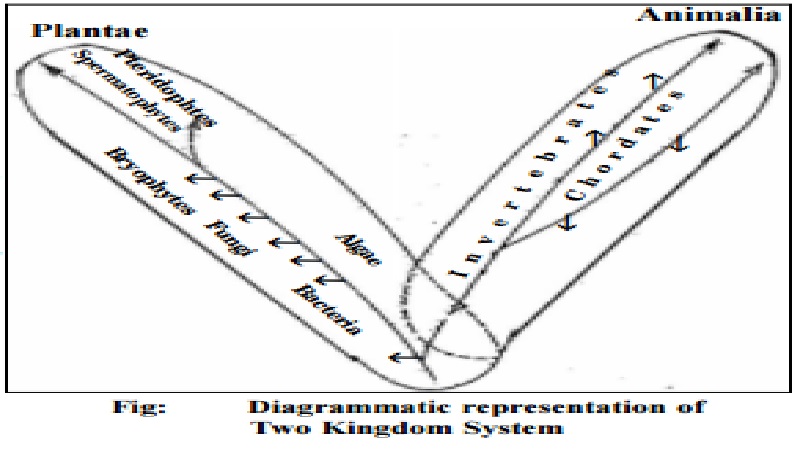 Carolus Linnaeus(1758) divided all the living organisms into two kingdoms.

Plants have branches, asymmetrical body with green leaves. Plants are non motile and fixed in a place.

During the day time plants more actively involve in photosynthesis than in respiration and hence take more of CO2 and liberate O2  during night O2 is taken in and CO2 is liberated.

They are autotrophic in their mode of nutrition since they synthesize their own food.

Plants have growing points which have unlimited growth.

Cells have a cell wall. Cells have a lager vacuole. Plant cells lack centrosome and they may have inorganic crystals.

Reproduction takes place with help of agents such as air, water and insects. Asexual and vegetative method of reproduction is also not uncommon.

This kingdom includes unicellular protozoans and multi-cellular animals or metazoans. They are characterized by

Definite shape of the body and absence of branches.

Ability to move from place to place.

During day and night take in O2 and release CO2 i.e only respiration takes place and there is no photosynthesis.

Holozoic mode of nutrition since no chlorophylls present and hence they are heterotrophs.

Growth is limited in animals. Growth stops after attaining a particular size and age.

Lacks cell wall. They have small vacuoles. Centrosomes are present. Cells do not have inorganic crystals.

1. Certain organisms share the characteristics j of both plants and animals. eg. Euglena and Sponges. In Euglena, some species have chlorophyll and are autotrophic like plants. However like animals they are dependent on an external supply of vitamins B, and B12 which they cannot synthesize themselves. A few species of Euglena lack chloroplasts and are therefore colourless and non-photosynthetic (heterotrophic). They have a saprotropic mode of nutrition, carrying out extra-cellular digestion.

Other colorless forms ingest small food particles and carryout intracellular digestion (holozoic nutrition). If green species of Euglena are kept in darkness they lose their chloroplasts and become colourless and survive saprotrophically. Chloroplasts return when the organisms are returned to light. Euglena is also characterized by the presence of an animal pigment astaxanthin in the eye spot.

Fungi are a group of organisms which have features of their own. They lack chlorophyll. They are heterotrophic like animals. They are placed along with green plants.

Many primitive organisms such as bacteria did not fit into either category and organisms like slime moulds are amoeboid but form fruiting bodies similar to fungi.

The status of virus whether they are living or non living is a point of debate even to -day.

For all these reasons the two hundred and fifty years old Linnaeus system of classifying organisms into two rigid groups animals and plants is considered highly arbitrary and artificial.