This we discuss about two dimensional concepts and object design.

This we discuss  about two dimensional concepts and object design.

A two-dimensional rotation is applied to an object by repositioning it along a circular path on xy plane. To generate a rotation, specify a rotation angle θ and the position (xr,yr) of the rotation point (pivot

point) about which the object is to be rotated.

A scaling transformation alters the size of an object. This operation can be carried out for polygons by multiplying the coordinate values (x,y) to each vertex by scaling factor Sx & Sy to produce the transformed coordinates (x*,y*).

This concept is used to implement a object transformation,resize and rotating in different angle.

Many graphics applications involve sequences of geometric transformations. Ananimation, for example, might require an object to be translated and rotated at eachincrement of the motion. In order to combine sequence of transformations we haveto eliminate the matrix addition. To achieve this we have represent matrix as 3 X 3instead of 2 X 2 introducing an additional dummy coordinate h. Here points arespecified by three numbers instead of two. This coordinate system is called asHomogeneous coordinate system and it allows to express transformation equationas matrix multiplication

• Actual coordinates drawn will be (x/h,y/h)

1.Translate the object so that pivot-position is moved to the coordinate origin

2.Rotate the object about the coordinate origin 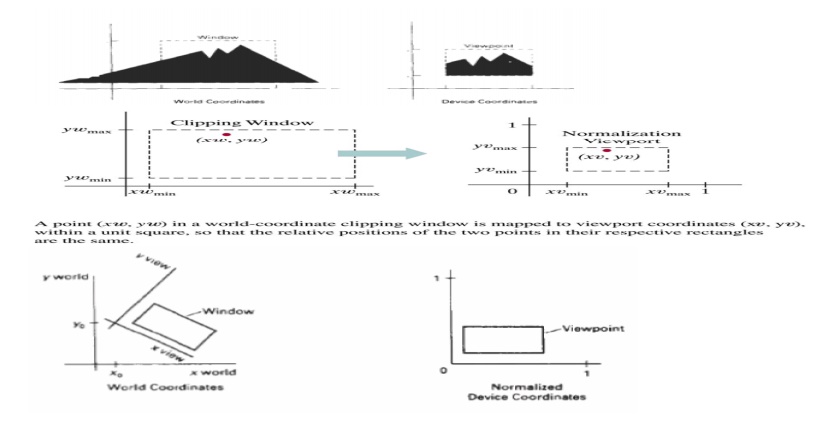 Changing the position of the viewport, we can view objects at different positions on the display area of an output device.

Clip window is a rectangle in standard position. A point P=(x,y) for display, if following inequalities are satisfied: xwmin <= x <= xwmax

If the value of u for an intersection with a rectangle boundary edge is outside the range of 0 to 1, the line does not enter the interior of the window at that boundary. If the value of u is within the range from 0 to 1, the line segment does indeed cross into the clipping area. This method can be applied to each clipping boundary edge in to determined whether any part of line segment is to displayed.

This is one of the oldest and most popular line-clipping procedures. The method speeds up the processing of line segments by performing initial tests that reduce the number of intersections that must be calculated. Every line endpoint in a picture is assigned a four digit binary code called a region code that identifies the location of the point relative to the boundaries of the clipping rectangle. 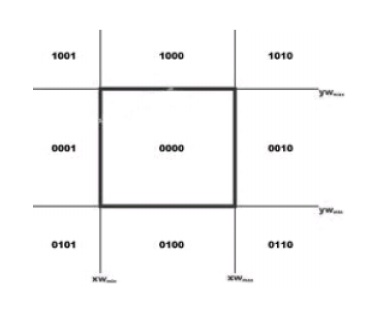 To clip polygons, we need to modify the line-clipping procedures. A polygon boundary processed with a line clipper may be displayed as a series of unconnected line segments (Fig.), depending on the orientation of the polygon to the clipping window.

2. If both input vertices are inside the window boundary, only the second vertex is added to the output vertex list.

If both input vertices are outside the window boundary nothing is added to the output list.

Curve-clipping procedures will involve nonlinear equations, and this requires more processing than for objects with linear boundaries. The bounding rectangle for a circle or other curved object can be used first to test for overlap with a rectangular clip window

A line clipping procedure involves several parts. First we test a given line segment whether it lies completely inside the clipping window.