The turbo charger utilizes the wasted heat energy in the exhaust system, to run a compressor which compresses the intake air.

The turbo charger utilizes the wasted heat energy in the exhaust system, to run a compressor which compresses the intake air. Compressed intake air has more density and hence more fuel can be injected increasing the power of the engine. Turbo charging is an ideal way to increase the engine power without increasing the engine size.

A turbocharger, or turbo (colloquialism), from Greek "τύρβη" ("wake"), (also from Latin "turbo" ("spinning top"), is a turbine-driven forced induction device that increases an engine's efficiency and power by forcing extra air into the combustion chamber. This improvement over a naturally aspirated engine's output results because the turbine can force more air, and proportionately more fuel, into the combustion chamber than atmospheric pressure alone.

Turbochargers are commonly used on truck, car, train, aircraft, and construction equipment engines. They are most often used with Otto cycle and Diesel cycle internal combustion engines. They have also been found useful in automotive fuel cells. 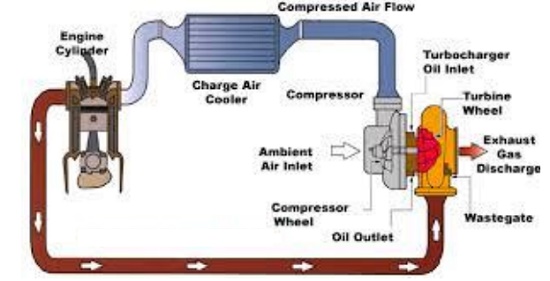