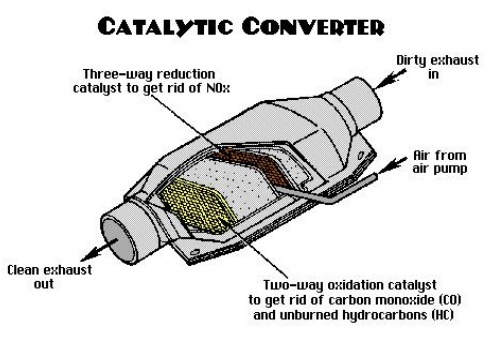 Catalytic converter is a vehicle emissions control device that converts toxicpollutants in exhaust gas to less toxic pollutants by catalyzing a redox reaction(oxidation or reduction).

Catalytic converter is a vehicle emissions control device that converts toxicpollutants in exhaust gas to less toxic pollutants by catalyzing a redox reaction(oxidation or reduction). Catalytic converters are used in internal combustion engines fueled by either petrol (gasoline) or diesel— including lean burn engines.

The first widespread introduction of catalytic converters was in the United Statesautomobile market. Manufacturers of 1975 model year equipped gasoline-powered vehicles

with unburned hydrocarbons (HC) to produce carbon dioxide (CO2) and water (H2O). In 1981, two-way catalytic converters were rendered obsolete by “three-way” converters that also reduceoxides of

Although catalytic converters are most commonly applied to exhaust systems in automobiles, they are also used on electrical generators, forklifts, mining equipment, trucks, buses, locomotives, motorcycles, and airplanes. They are also used on some wood stoves to control emissions. This is usually in response to government regulation, either through direct environmental regulation or through health and safety regulations.

Construction of a catalytic converter;

The catalyst support or substrate. For automotive catalytic converters, the core is usually a ceramic monolith with a honeycomb structure. Metallic foil monoliths made of Kanthal (FeCrAl) are used in applications where particularly high heat resistance is required Either material is designed to provide a large surface area. The cordierite ceramic substrate used in most catalytic converters was invented by Rodney Bagley, Irwin Lachman andRonald Lewis at Corning Glass, for which they were inducted into the National Inventors Hall of Fame in 2002.

The catalyst itself is most often a mix of precious metals. Platinum is the most active catalyst and is widely used, but is not suitable for all applications because of unwanted additional reactions and high cost. Palladium and rhodium are two other precious metals used. Rhodium is used as a reduction catalyst,  palladium  is  used  as  an oxidation catalyst,  and  platinum  is  used  both  for reduction and oxidation. Cerium, iron, manganese and nickel are  also  used, although  each  has limitations. Nickel is not legal for use in the European Union because of its reaction with carbon monoxide into toxic nickel  tetracarbonyl.[citation needed] Copper can  be used everywhere except North America,[clarification needed]where its use is illegal because of the formation of toxic dioxin .[citation needed]