In all spark ignition engines which work on the Gasoline either 2-Stroke or 4-Stroke cycle principle and utilize a carburetor or fuel injection system, the combustion of the air-fuel mixture is initiated by an electric spark.

The term ‘Spark Ignition’ means that a brief electric arc is produced between the electrodes of a spark plug, the energy for which is derived from an external power source. In most cases this power source is the vehicle battery, which is constantly being supplemented by the alternate while the vehicle is mobile.

A different method of ignition is employed in diesel engines. This is called ‘compression ignition’ and relies on the fact that when air compressed, its temperature rises. In diesel engines,

compression ratio of between 16:1 and 25:1 are common, and at the end of a compression the temperature of the trapped air is sufficiently high to ignite the diesel fuel that is sprayed into the cylinder at the appropriate time.

The functions of ignition system

The functions of the coil ignition systems in general use on motor vehicle may be divided into three areas. These are:

It must be remembered that vehicle battery voltages are usually 12 volt or 24 volt and this value is too low to produce a heavy spark at the plug gap in a cylinder under compression. For this reason one of the major functions of the battery ignition system is to raise the battery voltage to the required level and then apply it to spark plugs.

This process is correctly initiated in the primary circuit and completed in the secondary winding of the ignition coil. Depending on the type of engine and the conditions existing in the cylinders, a voltage of between 5,000 to 20,000 volts is required and this is called the ionizing voltage or firing voltage.

This firing voltage forces the electrons to jump between the electrodes of the spark plug in the gap to produce the required spark. The electric spark has sufficient heat energy to ignite the air-fuel mixture which later continues to burn itself.

As a reminder of the principle of EMI, a voltage will be induced into a coil whenever the following factors are present:

(c)     a relative movement between the magnetic field and conductors.

The factors affecting the operation of the Ignition system.

(a)  The strength of the magnetic field.

The stronger the magnetic field produced in the coil primary winding, the greater the possibility of producing a high secondary voltage.

isimportant when considering the voltages produced in both coil windings during the ignition cycle. 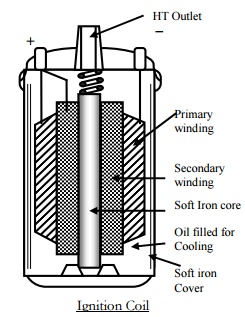 Construction of the Ignition coil

The source of the high voltage pulses of current produced in the inductive ignition system is in the ignition coil. The coil stores the energy in the magnetic field around the primary winding and at the required instant of ignition, transforms it into a pulse of high voltage current in the secondary

winding.  From here it is delivered to the correct spark plug via the high tension (HT) cables.  This

‘Inductive storage device’ may vary in design between certain manufacturers, but in general the most common construction is as shown in figure below.

This coil contains a rod shaped, laminated soft iron core at its centre, and the soft iron cover surrounds both primary and secondary windings. Both of these soft iron components are used to intensify and maximize the effect of the primary magnetic field and thus, the energy stored. The iron core must be laminated to minimize the effects of eddy currents that are produced during operation and so keep to a minimum the heat developed. The outer soft iron cover is slotted to allow circulation of the oil filling which is used for cooling purposes.

A ceramic insulator at the base of the coil supports the core and winding and at the top is a plastic-type insulator which provides a location point for the high-tension and primary terminals. This top insulator is sealed into the outer case to prevent the loss of coolant oil or the energy of moisture.

Operation of an Ignition coil

When the ignition switch is closed, the primary winding of the coil is connected to the positive terminal of the vehicle battery. Now, if the primary circuit is completed through the contact breaker points a current will flow in the circuit, creating a magnetic field in the coil around the soft iron core. This magnetic field grows outwards from the core until it has reached maximum value and the core is fully magnetized and ceases to grow further. 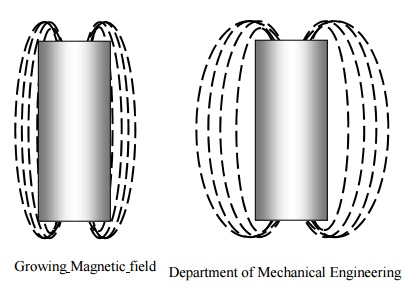 To provide the very high voltage necessary to create a spark across the plug gap, the secondary winding has a very large number of turns. NOTE: The ratio of the number of secondary turns to the number of primary turns is very large – approximately 100:1. The effect of this high ration is to produce a very high voltage in the secondary winding when the magnetic field is collapsed rapidly across it as the contact breaker points are opened.

To understand the operation of the ignition coil, it is necessary to have the knowledge of the effect of winding insulated wire into the form of a coil and then passing a current through it. In earlier chapters of this course, an explanation was given of how a magnetic field forms around a wire when current flows through it.

The construction of a capacitor is quite simple. It is made of two strips of metallised paper, separated by a thin dielectric (insulator), generally of waxed paper or plastic, both rolled tightly together and fitted into a metal container. An insulated flexible lead is attached to one of the metallised plates and brought out for connection to the insulated side of the contacts. The other metallised plate is attached to the metal container which has facilities for connecting it to a good earth either inside or outside the distributor, thus effectively connecting the capacitor across, or in parallel, with the points. 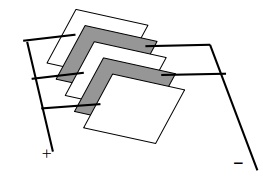 As a general statement it can be said that a capacitor is a device which  has  the  ability to store an  electrical  charge.  When a capacitor is ‘charged’, each plate will  hold an equal but opposite charge.  That is the plate  connected  to  the  negative  side  of  the  circuit  will  acquire a negative charge, and the plate connected to the positive side of the circuit, a positive charge.  Once these opposite charges are stored on the plates, they will attract each other through the separating dielectric, and thus tend to prevent the charge escaping or leaking  away.

NOTE: The loss of electrical charge from a capacitor is termed the capacitor’s leakage. Among the tests applied to a capacitor is a test for leakage, which must be below a certain rate of loss.

The factors affecting the capacity of a capacitor:

(b)                      The distance the plates are separated, i.e. the thinner the dielectric, the greater the attractive force between the charges, and therefore the higher the capacity.

The amount of charge a capacitor can hold is termed its capacitance (symbol C) which is measured in a unit called the farad (symbol F). Since the farad is a large quantity and it is difficult to have such a big capacitor in real time, the capacitors are generally measured by micro farad (Symbol µF)

The operation of a capacitor in an ignition circuit is relatively simple, but tends to appear complex because of the number of events, or changes, that occur simultaneously. The following explanation presents these changes as a logical, sequential set of events.

CIRCUIT OF THE IGNITION CIRCUIT 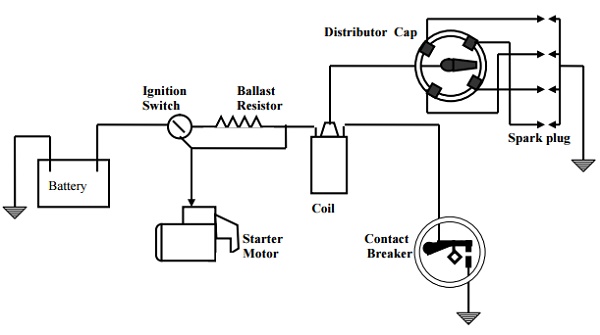 A simple circuit shown above can illustrate the position of the major components of an ignition system. With the ignition switch ‘on’: when the breaker contacts initially close, a current

commences to flow in the primary circuit and the magnetic field builds up relatively slowly, due to the self induced voltage that is developed at this time

During this ‘closed circuit period’ of the ignition cycle, the capacitor is in parallel with the breaker contacts which are closed at this time. As the distributor shaft continues its rotation the cam lobe lift the breaker gently to open the contacts.

It takes a certain number of degrees of distributor shaft rotation and therefore a measurable period of time for this to occur.

When the contacts are open and instantly a resistance is presented to the primary circuit because of this contact gap. The primary current is interrupted and the magnetic field is starting to collapse. The current produced by the self induced voltage has to enter the plates of the capacitor. Since the high resistance will be induced across the contacts due to their separation and it will naturally take the low resistance path.

When the contacts gap is slowly widening and the self induced voltage is rapidly rising towards the 200-300 volt level. The capacitor is rapidly charging up. As the capacitor reaches the

fully charged state, the contacts have opened to such a degree that even this high voltage cannot jump the gap and so the primary circuit currents comes to an ‘instant halt’.

The secondary voltage at this instant is fed out through the HT circuit to the correct spark plug where it ionizes the plug gap and forms a spark which ignites the air-fuel mixture. For the period of time of spark duration the capacitor remains fully charged. After the energy of the secondary circuit has been expended in the HT spark, the capacitor discharges back through the battery, ignition switch and coil primary to the opposite plate of the capacitor, thus recharging it in the reverse direction. The capacitor then discharges back again to recharge itself in the original direction – but at a lower value. It continues this oscillating cycle of charge and discharge until all of the stored energy is dissipated across the resistance of the primary circuit. The distributor cam continues its rotation, the points close again and the whole cycle is repeated.