Solenoid or piezoelectric valves make possible fine electronic control over the fuel injection time and quantity, and the higher pressure that the common rail technology makes available provides better fuel atomisation. To lower engine noise, the engine's electronic control unit can inject a small amount of diesel just before the main injection event ("pilot" injection), thus reducing its explosiveness and vibration, as well as optimising injection timing and quantity for variations in fuel quality, cold starting and so on. Some advanced common rail fuel systems perform as many as five injections per stroke. Common rail engines require a very short (< 10 seconds) to no heating-up time[ depending on ambient temperature, and produce lower engine noise and emissions than older systemsDiesel engines have historically used various forms of fuel injection. Two common types include the unit injection system and the distributor/inline pump systems (See diesel engine andunit injector for more information). While these older systems provided accurate fuel quantity and injection timing control, they were limited by several factors:

·       They were limited in the number and timing of injection events that could be commanded during a single combustion event. While multiple injection events are possible with these older systems, it is much more difficult and costly to achieve.

In common rail systems, a high-pressure pump stores a reservoir of fuel at high pressure — up to and above 2,000 bars (200 MPa; 29,000 psi). The term "common rail" refers to the fact that all of the fuel injectors are supplied by a common fuel rail which is nothing more than a pressure accumulator where the fuel is stored at high pressure. 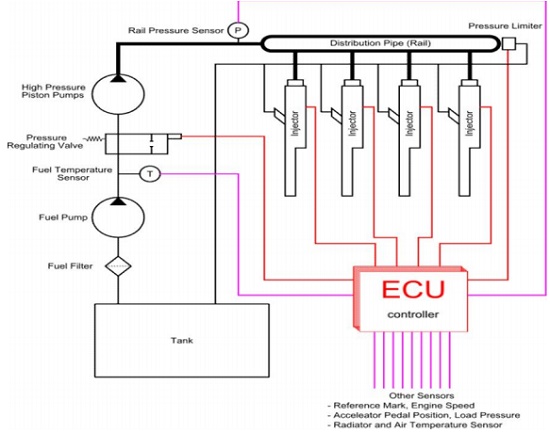