Turbocharging is a method of increasing engine volumetric efficiency by forcing the air fuel mixture into the intake rather than merely allowing the pistons to draw it in naturally.

Turbocharging is a method of increasing engine volumetric efficiency by forcing the air fuel mixture into the intake rather than merely allowing the pistons to draw it in naturally.

A turbocharger uses the force of the engine exhaust stream to force the air fuel mixture into the engine. It consists of a housing containing two chambers. One chamber contains a turbine that is spun as hot exhaust gases are directed against it. The turbine shaft drives an impeller that is located in the other chamber. The spinning impeller draws an air fuel mixture from the carburetor and forces it into the engine. Because the volume of exhaust gases increases with engine load and speed, the turbocharger speed will increase proportionally, keeping the manifold pressure fairly uniform. A device known as a waste gate is installed on turbocharged engines to control manifold pressure. It is a valve which, when open, allows engine exhaust to bypass the turbocharger turbine, effectively reducing intake pressure. The waste gate valve is operated bya diaphragm that is operated by manifold pressure. The diaphragm will open the waste gate valve whenever manifold pressure reaches the desired maximum. 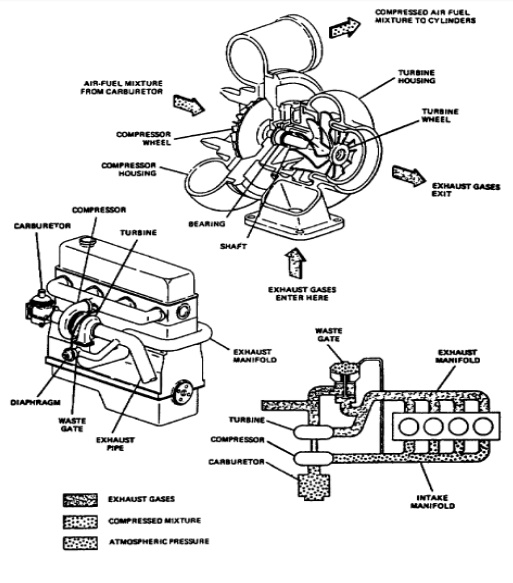 There are different types of turbo charging, they are

In this system, the exhaust pressure of the engine is constant and higher than atmospheric pressure so that the turbine can operate at an optimum efficiency. The objective dictates a large exhaust manifold to absorb pressure fluctuation and therefore the kinetic energy in the exhaust blow down is dissipated and becomes a reheat factor. This arrangement is shown in figure below. 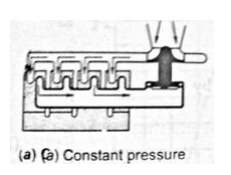 The exhaust gases from the entire cylinder are released through exhaust valve at a constant pressure in the common manifold and then to turbine. The blow-down energy in the form of internal energy is converted into work in the turbine. The recovery of blow down energy is higher if the pressure ratio of the turbine is high.

1.     The pressure ratio is higher in turbine and compressors; the recovery of exhaust energy is efficient and is lower than other systems.

2.     The turbine runs at higher efficiency because of constant pressure and temperature of the exhaust gases supplied to the turbine. This method is more efficient and effective than pulse system if the pressure ratio is 3 or higher.

3.     The exhaust piping arrangement is very simple for multi cylinder engines and highly efficient turbine can be used.

4.     Engine speed is no limited by the pressure waves in the exhaust pipes.

5.     Exhaust manifold being large to hold pressure fluctuations with ±5%, the pipe diameter is kept 1.4 times piston diameter. However, the insulation of exhaust manifold is essential to preserve the temperature of exhaust gases.

1.     As the pressure in the exhaust manifold is maintained constant, this requires larger diameter of exhaust pipes. This effect is marked in case of small engines.

2.     The response of the system to the load change is considerably poor. Because, acceleration occurs very slowly when load is suddenly increased. This is because, only a small amount of energy due to increased exhaust temperature is available to accelerate the engine at high loads.

3.     For higher efficiency of the turbine, the higher pressure drop in the turbine is required.

To achieve this, large pressure drop during release is required which makes scavenging a bit difficult (p2 / p1) is necessary and do not require acceleration and operation at part loads.

4.     The part load ɳ of the turbine is reduced due to partial admission to the turbine.

5.     This system is not suitable at all suitable for two strokes engines as it is impossible to run the compressor with the help of turbo charger alone and some additional means have to be provided for supplying the air to the engine. 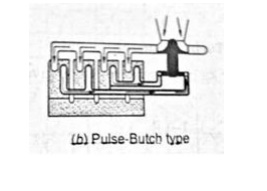 2.     Separate exhaust pipes are used so that the exhaust process of various cylinders do not interfere with one another. A common exhaust pipe can also be used for those cylinders whose exhaust cycles do not overlap significantly in terms of times.

3.     The space required is less due to short and smaller diameter pipes.

4.     Rapid acceleration of turbo charger to a higher speed can be fed to the turbine without delay.

5.     Better scavenging can be obtained at low load due to reduced pressure in the exhaust manifold.

1.     The recovery of energy is poor when the pressure ratio of turbine is high.

2.     Complicated inlet and exhaust piping is required with the multi-cylinder engines.

3.     The turbine efficiency becomes poor in case of one or two cylinder engines.

4.     The scavenging process is disturbed if the waves have to travel long distance to reach to the turbine.

1.     This system is widely used for low pressure ratio turbines and rapidly acceleration is required.

2.     This is generally used when numbers of cylinder are four or more and connected to a common exhaust pipe.

The pulse convertor has the advantages of pulse and the constant pressure turbo-charging to be used simultaneously and avoids most of the drawbacks of both. 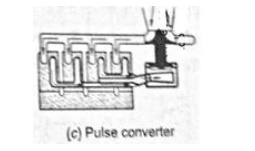 The characteristics of turbo-chargers are fundamentally different from those reciprocating I.C engines and leads to complex matching problems when they are combined. Supercharger has added complication of mechanical drive and the compressor efficiencies are usually such that the overall economy is reduced. However, flow characteristics are better matched and transient response is good.

The pressure wave superchargers make use of the fact of two fluids having different pressures are bought into direct contact in long narrow channels; equalization of pressure occurs faster mixing. One such device, the complex, has been developed for I.C engine super-charging which operates using this principle. 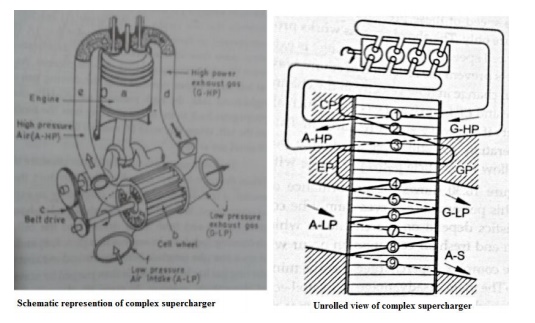 For diesel engines, high supercharging is required as 25 to 30 bar BMEP is expected. This cannot be obtained in a single stage turbo-charging so a two stage is used as shown in figure given below. 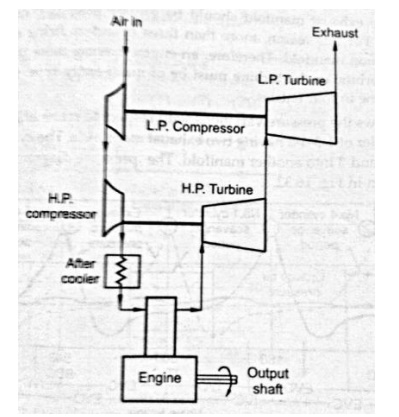 1.     High pressure ratio can be obtained and provides wide range of operation.

2.     The efficiency of two stages turbo-chargedis higher than single because of higher boost ratio. This gain is further increased by introducing after-cooler.

3.     Better matching of turbocharger to engine operating conditions is possible.

4.     The transient response of two stages turbo-charged is better than single stage.

3.     Matching of turbo-charged with engine is quite difficult.