Treponema pallidum: Properties of the Bacteria

T. pallidum is the causative agent of syphilis, the most commonsexually transmitted disease.

T. pallidum is the causative agent of syphilis, the most commonsexually transmitted disease.

·           It is actively motile. Endoflagella are responsible for motility of the bacteria. It shows three types of motility: flexion of the whole body, backward and forward movement, and rota-tion around the long axis. As the Treponema moves, it shows a series of secondary curves, which appear and disappear but its primary spiral structure remains unchanged.

·           T. pallidum is too thin to be seen by microscopy in specimensstained by simple Gram or Giemsa staining. It is stained by silver impregnation method, which makes the bacteria thickened by deposition of silver compounds during the pro-cess of staining. Levaditi’s method (Fig. 44-1) and Fontana’s method are the examples of silver impregnation staining methods, which are useful for staining tissue sections and blood films, respectively. 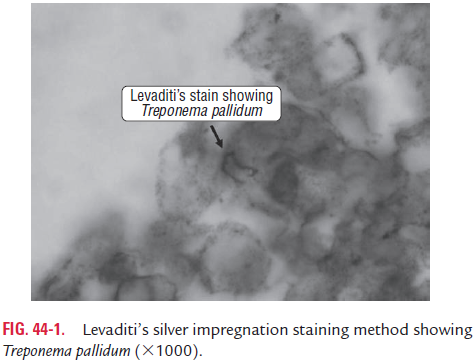 ·           Dark ground or phase contrast microscopy is useful for dem-onstrating the morphology and motility of live T. pallidum. T. pallidum on election microscopy shows a trilaminar cyto-plasmic membrane surrounded by a cell wall. The latter con-tains peptidoglycan that confers the cell its shape and rigid-ity. The cell wall is surrounded by an outer membrane layer. Three, occasionally four flagella known as endoflagella, responsible for motility of bacteria, originate from each end of the cell and extend toward the opposite end of the cell in the space between cell wall and outer membrane layer. These endoflagella do not extend beyond the cell wall outside but remain always confined within the outer membrane layer.

T. pallidum does not grow in artificial culture media. T. pallidum had been maintained for a long time by subculture in animals.

Nichole’s strain of T. pallidum:It is a pathogenic strain, whichhas been maintained for several decades by serial passage in rab-bit testes. This strain was isolated in 1913, originally from the brain of a fatal case of a patient with general paralysis of insane. This strain is most commonly used for diagnostic and research purposes in the laboratory. Strains of T. pallidum have been main-tained for a short period in cell lines, such as Eagle and McCoy cell lines supplemented with fetal bovine serum and reducing agent.

Sensitivity to physical and chemical agents: T. pallidumis avery delicate bacterium. It is readily killed by drying or heat-ing at 41–42°C for 60 minutes, at 0–4°C for 1–3 days. They are also readily killed on contact with distilled water, soap, arsenic compounds, mercuric compounds, bismuth compounds, and common antiseptics. T. pallidum strains can be preserved for laboratory use by many methods. It can be stored frozen in a medium containing 5% glycerol at 70°C or in liquid nitrogen at 2130°C for 10–15 years. 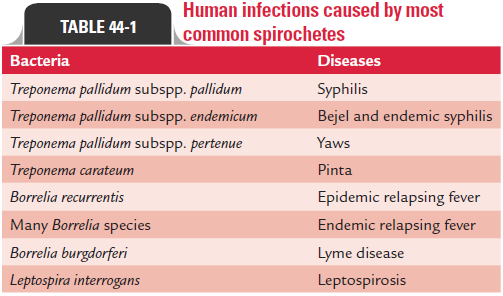