Since the clinical manifestations of the syphilis are protean, laboratory tests play an important role to confirm diagnosis of the disease.

Since the clinical manifestations of the syphilis are protean, laboratory tests play an important role to confirm diagnosis of the disease.

Specimens for microscopy include serous transudates from moist lesions, such as primary chancre, condyloma latum, mucous patch, etc. Serum is used for serodiagnosis, and cere-brospinal fluid (CSF) is used for diagnosis of neurosyphilis.

Specimens from oral cavity cannot be used because sapro-phytic nonpathogenic treponemes are present as normal flora of the oropharynx.

Since T. pallidum cannot be cultured on artificial medium, culture is not used for diagnosis of syphilis.

Serology is the mainstay in the diagnosis of syphilis. It is exten-sively used for diagnosis of the condition in most of the labo-ratories. The serological test depending on the nature of the antigen used can be classified as (a) nontreponemal tests and (b) treponema-specific tests.

Nontreponemal tests are nonspecific serological tests used for the diagnosis of syphilis. These tests are also called standard tests of syphilis (STS). This group of tests use nontreponemal antigen (known as cardiolipin) and detect reagin antibodies.

Prozone phenomenon occurs (a) in approximately 2% of patients with secondary syphilis, (b) in patients with congeni-tal syphilis, and (c) in pregnant women. High level of reaginic antibodies in these conditions may give rise to false negative reaction with undiluted serum. Repeating the test with several dilutions of the patient serum excludes this phenomenon.

1.        Wasserman complement fixation test:This was the first sero-logical test used in 1906 for serodiagnosis of syphilis. The test originally employed a watery extract of the lesion of a syphilitic fetus as the antigen. Subsequently, this antigen was substituted by an alcoholic extract of ox heart tissue supplemented with lecithin and cholesterol. This antigen was finally replaced by using cardiolipin antigen, a purified lipid extract of the bovine heart tissue supplemented with lecithin and cholesterol. The test, which was used as an important test in earlier days, now is no longer used.

2.        Kahn’s tube flocculation test:This was the first flocculationtest used by Kahn. But the test is no more used nowadays.

3.        VDRL test:VDRL test is a slide flocculation test used widelyfor the diagnosis of syphilis. The test is so named because it was developed first in the Venereal Disease Research Laboratory, USPHS, New York. This is a simple and more rapid test, which uses cardiolipin antigen with added lecithin and cholesterol. In this test, the serum is inactivated at 56°C for 30 minutes and a measured volume of serum is placed on a special cav-ity slide. The cardiolipin antigen after preparation is added to serum sample on a slide and is rotated on a VDRL rotator for a specified period of 4 minutes. The reaction is read under a low-power objective of microscope. In a positive test, the car-diolipin antigen reacts with reagin antibodies present in the infected serum and forms visible clumps. In a negative test, car-diolipin continues to remain as uniform crystals in the serum. The result of the test is reported as reactive, weak reactive, or nonreactive depending on the extent of the formation of the clumps. The antibody titer of the serum can also be determined by testing on serial dilutions. The reciprocal of the end point is considered as the titer (for example reactive 8 dilutions or titer 8). VDRL test can also be performed on CSF samples. Unlike serum samples, CSF samples are not heated prior to the test. The VDRL test becomes positive 4–5 weeks after expo-sure to T. pallidum and 1–2 weeks after appearance of chancre. The VDRL test is a highly sensitive test. Sensitivity of the test depends on the stage of the disease:

·           High antibody titers may be found in patients developing gummatous lesions and neurovascular or cardiovascular complications.

The test is usually negative in tertiary or third stage of syphilis. This test is negative in early primary syphilis, latent acquired syphilis, and late congenital syphilis.

Quantitation of the sera is useful to monitor activity of the disease and is of prognostic value. The quantitative estima-tion of reaginic antibodies is a good prognostic marker used for treatment of syphilis. A fourfold decrease in titer following therapy suggests adequate therapy, whereas a fourfold increase in titer of reaginic antibodies following therapy suggests reinfection or relapse.

The main disadvantage of VDRL test is that it shows biologi-cal false positive (BFP) reactions.

Biological false positive reactions: BFP reactions are defined as pos-itive reactions observed with test using cardiolipin antigen but are negative with specific test using treponema antigen. These results are not due to technical faults. They represent antibody responses to nontreponemal cardiolipin antigens found in other tissues. BFP reactions are classified as acute or chronic reactions. The reactions that become negative within 6 months are called acute reactions, while those that are found for a lon-ger period are called chronic reaction.

·           Acute BFP reactions are typically seen in (a) acute bacterial or viral infections, (b) injuries, or inflammatory conditions and (c) in early HIV infection.

·           Chronic false positive reactions last for more than 6 months and are seen in (a) patients with parenteral drug use, (b) autoimmune or connective tissue diseases, such as systemic lupus erythematosus, (c) aging, and (d) hypergammaglobu-linemia, (e) also seen in other infectious conditions, such as tropical eosinophilia, malaria, infectious mononucleosis, hepatitis, leprosy, and relapsing fever (Table 44-3). 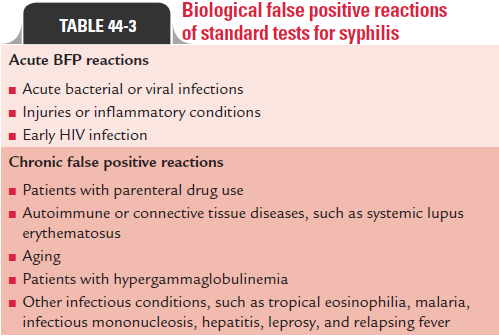 ·           The BFP reactions can usually be ruled out by using trepo-nema-specific test.

The VDRL enzyme-linked immunosorbent assay (ELISA): It is amodification of VDRL test which is being used to detect both IgM and IgG antibodies separately in the patient serum. This test is used mainly for large-scale screening of patient serum.

The RPR test is used for testing serum or plasma, but not for the CSF. Automated reagin test is a modification of RPR test which is used for screening of large number of serum samples.

T. pallidum immobilization test:TPI test was the first specifictreponemal test, which was introduced in 1949. This test detects the treponemal antibodies in patient’s serum, which immobilize motile virulent T. pallidum. The test is performed by incubating live T. pallidum strains with test serum in the presence of complement. If the serum contains treponemal antibodies, the treponemes become immobilized, which can be demonstrated under dark ground microscope. The test when introduced was the most specific serological test for diagnosis of syphilis. But because of its complexity and difficulty in maintaining live treponemal strains, this test is no longer used and is replaced by newer tests, such as TPHA and fluorescent treponemal antibody absorption (FTA-Abs) tests.

Fluorescent treponemal antibody test: FTA test is the mostspecific and popular test used for diagnosis of syphilis. FTA is an indirect immunofluorescence (IIF) test, which uses acetone fixed smears of T. pallidum on the slides. The test is performed by adding a drop of test serum to the smear on the slide followed by washing and re-incubating the smear with fluorescent labeled antihuman immunoglobulin. The slide is examined under a fluorescence microscope. Demonstration of fluorescent treponemes is suggestive of a positive FTA test.

FTA absorption (FTA-Abs) is a modification of FTA test,which shows high sensitivity and specificity. In this test, patient’s serum is first absorbed with a sonicated extract of non-patho-genic T. phagedenis (Reiter’s treponeme) to remove group-specific antibodies. The test is almost as specific as the TPI test and is considered as a standard reference test in syphilis serology.

TPHA test: TPHA test uses erythrocytes sensitized with asonicated extract of T. pallidum as antigen. TPHA is now been modified to perform in microtiter plates and is referred to as microtiter hemagglutination T. pallidum (MHA-TP) test. This test is performed by incubating the serial dilution of the patient’s serum with erythrocytes sensitized with T. pallidumantigen in a microtiter plate. If antibodies are present, hemagglutination of RBCs occur (Fig. 44-3, Color Photo 50). The serum samples before testing for TPHA are reabsorbed with a diluent containing Reiter’s treponeme, rabbit testes, and sheep erythrocytes. 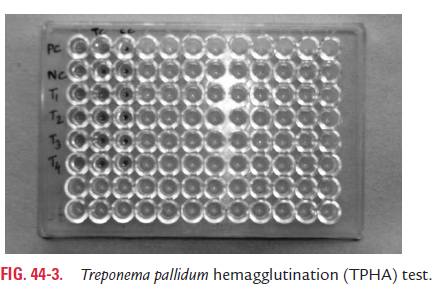 TPHA is the most widely used treponemal test available commercially. It is simple, economical, and does not require any expensive sophisticated equipment.

Enzyme immunoassay: EIA uses ultrasonicatedT. pallidumantigen coated on tubes or ferrous metal beads as solid-phase carrier for antigen. The serum antibodies are detected by an enzymatic reaction. The test is available commercially. All the treponemal tests are not completely specific for syphilis 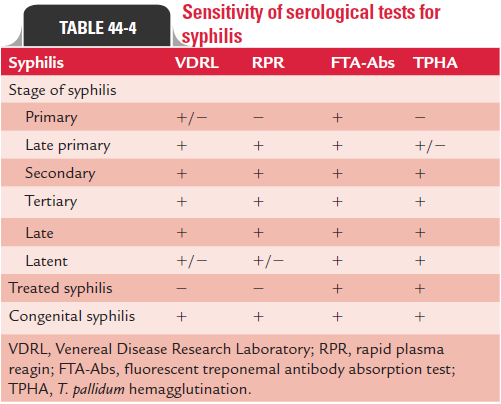 They also show false positive reactions in patients with other spirochetal diseases, such as leptospirosis, relapsing fever, Lyme disease, pinta, yaws, and rat-bite fever. The sensitivity of common tests performed for the diagnosis of syphilis is summarized in Table 44-4. The test accuracy of various diagnostic methods in syphilis is presented in Table 44-5.