L. interrogans complex includes pathogenic leptospires thatcause leptospirosis. The disease, often referred to as swamp fever, mud fever, or swine herd’s disease, is the most common zoonosis in the world.

L. interrogans complex includes pathogenic leptospires thatcause leptospirosis. The disease, often referred to as swamp fever, mud fever, or swine herd’s disease, is the most common zoonosis in the world.

·           L. interrogans are thin, delicate, coiled spirochetes measuring6–20 mm length and 0.1 mm in breadth. They are actively motile by means of two periplasmic flagella, each present at opposite end of the bacteria by continually spinning on the long axes.

·           They possess tightly coiled spirals and hooked ends, resem-bling the handle of an umbrella. They stain poorly with aniline dyes but stain well with silver impregnation methods, such as Levaditi’s (Fig. 44-5) and Fontana’s method of staining. 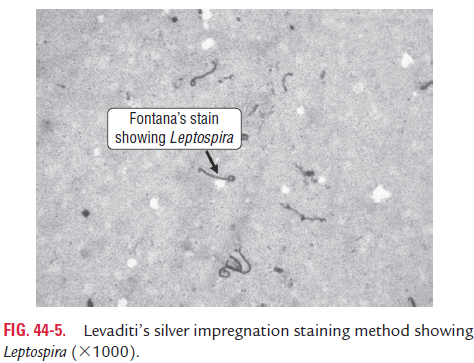 L. interrogans are obligate aerobes. They use fatty acids and alco-hols as source of carbon and energy. They grow at an optimum temperature of 25–30°C and optimum pH of 7.2–7.5.

Leptospira can be grown on the chorioallantoic membrane of 10–20 days’ old chick embryo. The bacteria are demonstrated in the blood of the allantoic sac 4–5 days’ after inoculation.

Animal inoculation is a useful method for obtaining pure culture of Leptospira. The bacteria are inoculated intraperito-neally in guinea pigs followed by collection of blood from the heart 10 minutes after inoculation. Culture of the heart blood yields pure colonies of L. interrogans.

Susceptibility to physical and chemical agents: Leptospiraare readily killed by heating at 50°C for 10 minutes and at 60°C for 10 seconds. They are destroyed by acidity of gastric juice in 30 minutes and also by the bile. They are also readily destroyed by chlorine and commonly used antiseptics and disinfectants. They die rapidly in acidic urine, in salty or brackish water, and in nonaerated sewage.