The treatment goal is to decrease the frequency and intensity of aggressive behavior.

The treatment goal is to decrease the frequency and intensity of aggressive behavior. Specialized units such as secure or psychiat-ric intensive care units (Musisi et al., 1989; Goldney et al., 1985; Warneke, 1986; Citrome et al., 1995) provide a structured envi-ronment that optimizes staff and patient safety. In general these specialized units are staffed with persons trained in interacting with volatile and difficult to manage patients (Maier et al., 1987). When available, these units can be a valuable resource for educa-tion, training, consultation and referral.

Although pharmacotherapy remains a mainstay of treat-ment for the persistently aggressive patient, behavioral plans need to be used in tandem. Providing structure, including the use of behavioral contracts, can be useful. Preventive aggression devices (PADS) are a form of ambulatory restraints, which can be used as an alternative to seclusion (Van Rybroek et al., 1987). The technique was first developed for a specialized inpatient unit 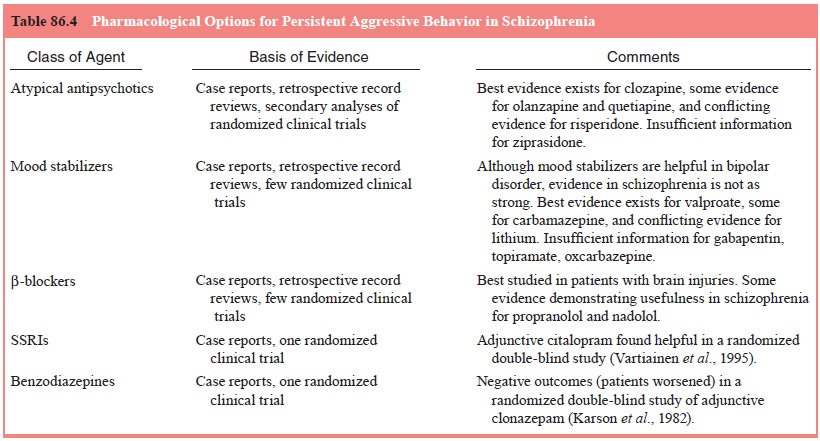 with repetitively aggressive patients. Patients in these wrist-to-belt and/or ankle–ankle restraints can remain with their peers on the ward, eat their meals and interact, yet are prevented from striking out and injuring others. In combination with a compre-hensive behavior modification program, these patients can be weaned off the use of the ambulatory restraints.

Although pharmacotherapy for the longer-term man-agement of aggressive behavior is somewhat dependent on the patient’s underlying diagnosis, clinical management is often complicated and can entail the use of several coprescribed medi-cations. At the core of impulsive aggressive behavior may be a dysregulation of the serotonergic neurotransmitter system and this may explain the possible ameliorative effects of atypical anti-psychotics and the selective serotonin reuptake inhibitors (SSRIs). In addition, beta-blockers and moodstabilizers have been used with some success. Table 86.4 outlines the medication strategies useful in patients with aggressive behavior and schizophrenia. Nonadherence to a treatment regimen may require the use of out-patient commitment, now available in many jurisdictions.

The availability of atypical antipsychotics has led to the observa-tion that these agents may act differently from the older antipsy-chotics in that they may specifically target aggressive behavior. Several retrospective studies have demonstrated a decrease in the number of violent episodes and/or a decrease in the use of se-clusion or restraint among inpatients after they began clozapine treatment (Wilson and Claussen, 1995; Ratey et al., 1993; Chiles et al., 1994; Mallya et al., 1992; Spivak et al., 1997; Maier, 1992; Ebrahim et al., 1994). At this time, the weight of the evidence favors clozapine as specific antiaggressive treatment for schizo-phrenia patients (Glazer and Dickson, 1998), with demonstrated superiority to haloperidol and risperidone (Citrome et al., 2001). More research is needed to compare the other atypical antipsy-chotics with clozapine for this indication. Ideally, such studies need to be done double-blind with subjects specially selected because of their aggressive behavior. This is operationally quite  diffi cult because of a number of logistical factors, including the relative rarity of aggressive events and consequent need for a large sample size and lengthy baseline and trial periods, as well as selection/consent bias (Volavka and Citrome, 1999).

There is an expectation that adjunctive mood stabilizers can reduce aggressive and impulsive behavior (Citrome, 1995). This is understandable when the primary diagnosis is bipolar or schizoaffective disorder where the mood stabilizer is treating the core symptoms of the disorder, but these agents, notably valproate, lithium and carbamazepine, are also used, though less frequently, in patients with schizophrenia.

Beta-adrenergic blockers, in particular propranolol, have been used in the treatment of aggressive behavior in brain injured patients (Yudofsky et al., 1981, 1984). Propranolol has also been used as an adjunctive treatment for schizophrenia, and a reduction in symptoms, including aggression, was found (Sheppard, 1979). Nadolol may also be helpful (Ratey et al., 1992; Alpert et al., 1990; Allan et al., 1996). Beta-blockers may exert some of  their effects by decreasing akathisia, which in turn may decrease  agitation.

Clonazepam, a high potency benzodiazepine, had been reported useful in patients with bipolar disorder. This result is in contrast  to a double-blind placebo-controlled trial of adjunctive clonazepam in 13 schizophrenic patients receiving antipsychotics  (Karson et al., 1982). In that study no additional therapeutic benefit was observed and, in fact, four patients demonstrated violent behavior during the course of clonazepam treatment.

Using lorazepam for long-term management (in contrast to acute use as a “prn”) can be problematic because of physiological tolerance. Missing scheduled doses of lorazepam may result in withdrawal symptoms that can lead to agitation or excitement, as well as irritability and a greater risk for aggressive behavior.

The current interest in certain antidepressants’ role in aggression is based on the crucial role of serotonergic regulation of impulsive aggression against self and others. A number of reports have emerged that posit a role for fluoxetine (Goldman and Janecek, 1990), citalopram (Vartiainen et al., 1995) and fluvoxamine (Silver and Kushnir, 1998) in the treatment of persistent aggressive behavior.

Although not often considered as a first-line treatment, adjunctive electroconvulsive therapy (ECT) may be helpful in patients who have inadequately-responsive psychotic symptoms (Fink and Sackeim, 1996). An open trial of ECT in combination with risperidone in male patients with schizophrenia and aggression resulted in a reduction in aggressive behavior for nine of the 10 patients (Hirose et al., 2001). The combination of ECT and clozapine may also be helpful. A review of 36 reported cases treated with this combination, all of whom with a history of treatment-resistance, revealed that approximately two-thirds benefited from this treatment (Kupchik et al., 2000).