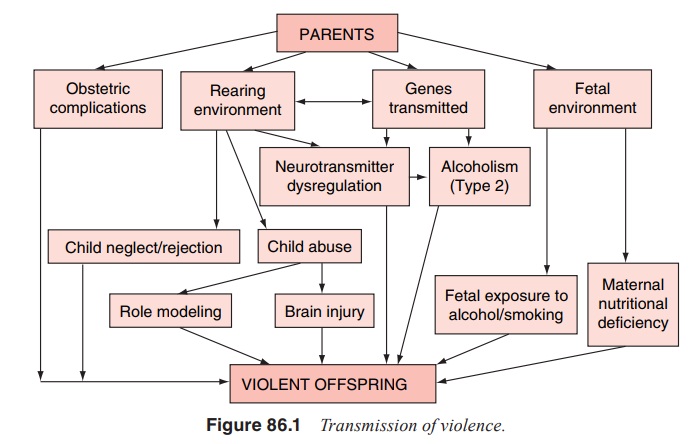 Several principal pathways leading to a predisposition to aggres-sive behavior are schematically displayed in Figure 86.1.

Several principal pathways leading to a predisposition to aggres-sive behavior are schematically displayed in Figure 86.1. The par-ents may contribute to the offspring’s predisposition via transmit-ted genes, fetal environment, obstetric complications and rearing environment. Several polymorphisms of genes that control the activity of various neurotransmitters (particularly serotonin and catecholamines) are apparently associated with persistent aggressive behavior. Maternal use of alcohol, smoking and malnu-trition during pregnancy were all reported to explain statistically significant (but clinically modest) proportions of the variance of aggressive behavior in adult offspring. Obstetric complica-tions, particularly in interaction with other factors such as early maternal rejection, may lead to elevated rates of violent crime in the offspring. Rearing environment not just limited to overt child abuse is one of the most important factors in the development of predisposition to violence. Detailed explanation of Figure 86.1, as well as the bibliography supporting it, are presented elsewhere (Volavka, 2002). 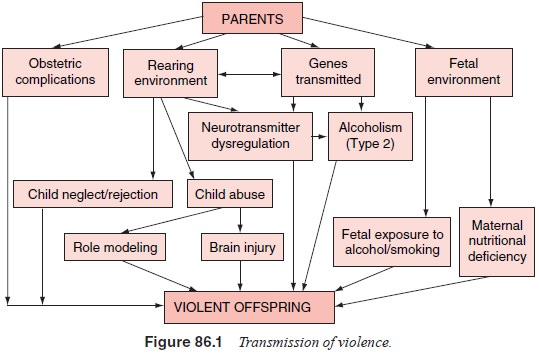 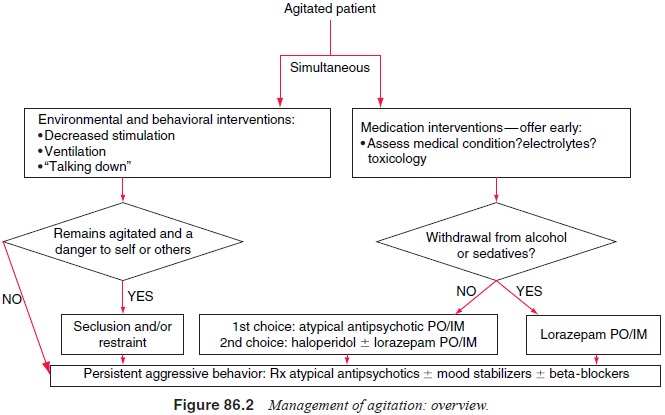 Mechanisms displayed in Figure 86.2 may operate in per-sons with or without a diagnosable mental disorder. We will now focus on aggressive behavior in persons with mental disorders.

Acute effects of alcohol and illicit drugs are involved, perhaps causally, in a large proportion of aggressive incidents. For ex-ample, 51.6% of women injured during a physical assault by a male partner reported that the assaulter had been drinking just before the incident (Kyriacou et al., 1999). Positive urine tests for illicit drugs were obtained in a majority of arrested males in the USA. Epidemiological stud-ies indicate that substance use disorders elevate substantially the prevalence of overt physical aggression (Swanson, 1994).

Most persons diagnosed with a psychosis are not violent. Never-theless, psychoses are associated with an elevated risk for aggres-sion. It is clear that comorbidity of psychosis and substance use disorder contributes to this risk very substantially. Furthermore, persons with psychoses are more likely to have substance use dis-orders than other people (Regier et al., 1990). Combination of sub-stance abuse and nonadherence to treatment is the typical prelude to the development of aggressive behavior in persons with severe mental illness living in the community (Swartz et al., 1998).

As every hospital psychiatrist knows, there are many psy-chotic inpatients who are aggressive without access to alcohol and drugs, and in spite of supervised antipsychotic treatment. Thus, factors other than substance use and nonadherence to treat-ment must be involved in the pathophysiology of aggression in these patients.

From the standpoint of practical management of aggres-sive patients with major mental disorders, it seems that it could be fruitful to study in detail individual assaults in order to assess underlying pathophysiology. This is a promising avenue of re-search since it is generally agreed that aggressive behavior has multiple causes that differ among patients, and perhaps among different incidents in individual patients. Our experience, based on interviews of assailants, victims and witnesses, as well as on observations of videotapes, suggests that most assaults among psychiatric inpatients diagnosed with psychoses are not driven by psychotic symptoms. It appears that many of these assaults are attributable to comorbid personality disorders.

Antisocial personality disorder (APD) is partly defined by aggres-sive behavior and therefore it is not surprising that many violent psychotic patients meet its diagnostic criteria. This circularity of definition makes the use of this diagnosis somewhat unhelpful. The concept of “psychopathy”, introduced to modern psychiatry by Cleckley (1976), is less circular since it relies primarily on personality and psychological processes rather than on criminal or aggressive behavior. Psychopathy is assessed by a valid and reliable checklist constructed by Hare and his coworkers (Hart et al., 1992). Table 86.1 shows the screening version of the check-list intended for use in persons with serious mental illness (Hare, 1996; Hart et al., 1995). The first six items in Factor-1 measure the severity of interpersonal and affective symptoms of psychop- 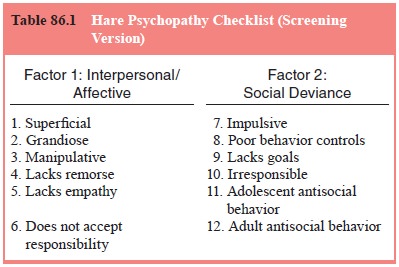 athy. The next six items in Factor-2 reflect the social deviance symptoms. Psychopathy is a narrower concept than APD. Most psychopaths meet the criteria for APD, but subjects diagnosed as APD do not necessarily meet the criteria for psychopathy. Psy-chopathy predicts violent behavior in nonpsychotic individuals (Hare and Hart, 1993), as well as in persons with major mental disorders (Hart et al., 1994). The rates of comorbidity of psy-chopathy and schizophrenia are elevated among violent patients (Nolan et al., 1999).

Differentiating aggressive behavior based on psychopa-thy from that based on psychotic symptoms has consequences for treatment. It is unlikely that psychopathy will respond to antipsychotics.