Agitation can be defined as excessive motor or verbal activity.

Agitation can be defined as excessive motor or verbal activity. Common examples include hyperactivity, verbal abuse, and threatening gestures and language. Unmanaged acute agitation can lead to violence. As such, acute agitation is a psychiatric emergency that requires rapid intervention. Oral medication treatment may be impractical or impossible. This section will focus on intramuscular medications within the context of a behavioral management plan.

Key points in assessment are outlined in Table 86.2. The time available for patient assessment will be dependent on the acu-ity of the presentation. For someone who is acutely agitated and an immediate danger to self or others, emergency mea-sures must be taken to avoid harm. Somatic conditions must be ruled out prior to initiating additional treatment, as an underlying metabolic, toxic, infectious, or other nonpsychiat-ric cause may need to be treated. In these cases the agitation is a symptom to be treated alongside the underlying condi-tion. This is not as great a concern for the physically healthy psychiatric patient whose history is well known to the staff than for the relatively unknown patient presenting to the emer-gency room. In addition, in the nursing home environment, new-onset agitation may indicate a newly emerging somatic condition. Once the patient is under behavioral control further medical and psychiatric work-ups can be done. Mechanical re-straints may be necessary to prevent the agitated patient from injuring himself/herself, or others, while the medical work-up is being conducted. 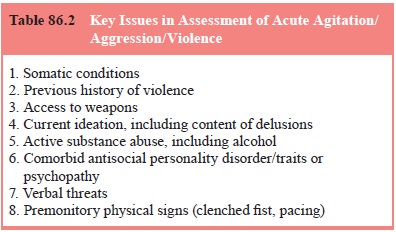 Care must be taken not to miss comorbid conditions of alcohol or sedative abuse or dependence that may present with acute intoxication or withdrawal. Such conditions will drive the treatment choice towards the use of a benzodiazepine (see later).

Assessment should also include the context of the agita-tion. Patients may be purposefully using aggressive behavior to intimidate others. Antisocial personality traits may be the most important factor in some instances of patient violence where goal-directed behavior such as extortion of money or cigarettes is present. These antisocial behaviors may not always be evident to staff, as they can occur in unsupervised areas such as hallways, bedrooms and bathrooms. Such predatory behavior may involve victims who are unable to articulate what is happening to them, while the aggressor appears to have an abundance of material goods or undue influence on others.

It is generally agreed that it is impossible to predict with ab-solute certainty if a violent act will occur, but it is possible to assess risks. Past history of violence may be the best predictor of future violent behavior (Blomhoff et al., 1990; Convit et al., 1988; Karson and Bigelow, 1987), and obtaining a history of this, access to weap-ons, and current ideation are essential elements in risk assessment.

Behavioral, psychological, and pharmacological interventions are used simultaneously (Citrome and Green, 1990). Clini-cians are urged to survey the environment for potential weap-ons, not to turn their back on the patient, and to have other staff available. Taking verbal threats seriously and being aware of physical premonitory signs such as a clenched fist and pacing are important. Initially, an agitated patient should be isolated from other patients and from distractions because extraneous stimulation can intensify psychosis in a patient who may be hal-lucinating, paranoid and agitated. Moreover, other patients may intentionally or inadvertently interfere with treatment. Generally it is easier to clear the area of many calm patients than to move one dangerous individual. Restraint or seclusion may be neces-sary, and this is the time where the risk for injury for both staff and patients is highest. The technique of the calming blanket, a soft comforter with canvas reinforcements, may be helpful in subduing the patient who is punching, scratching, or kicking.

Nonspecific sedation is often used in the management of an acutely agitated patient. In general, intramuscular injection of a sedative has a faster onset of action than oral administration but it has been observed that a patient may calm down readily after an oral dose, knowing that action has been taken and help is being provided. Previously, choice of intramuscular medication for these behavioral emergencies has been limited to typical antipsy-chotics (such as haloperidol or chlorpromazine) versus benzodi-azepines (principally lorazepam) (Table 86.3). The availability of intramuscular formulations of novel atypical antipsychotics pro-vides additional treatment options for the management of acute agitation in patients with psychosis (Citrome, 2002). Lorazepam, the only benzodiazepine that is reliably absorbed when adminis-tered intramuscularly, appears to be a good rational choice when treating an acute episode of agitation, especially where the etiol-ogy is not clear such as when a patient with a history of schizo-phrenia may actually be withdrawing from alcohol (Salzman, 1988; Greenblatt et al., 1979, 1982). Caution is required when respiratory depression is a possibility. There may be increased risk of this in patients with sleep apnea (associated with being morbidly obese, history of snoring and daytime drowsiness). Lorazepam is not recommended for long-term daily use be-cause of the problems associated with tolerance, dependence and withdrawal. Paradoxical reactions to benzodiazepines, as exhib-ited by hostility or violence has been an area of concern (Bond and Lader, 1979), but the evidence is not convincing and, in any event, such reactions are uncommon (Dietch and Jennings, 1988). The possibility of alcohol or sedative withdrawal as a cause of agitation is another point in favor of using lorazepam.

The typical antipsychotics cause sedation, given in a high enough dose. Haloperidol, a high potency butyrophenone, has been frequently used as an intramuscular prn medication for agitation and aggressive behavior in an emergency department setting for a wide variety of patients (Clinton et al., 1987). De-pending on the clinical response, subsequent doses may be ad-ministered as often as every hour if necessary. However, 4- to 8-hour intervals may be satisfactory. Haloperidol’s advantage over the low potency typical antipsychotics (e.g., chlorpromazine) is that it causes less hypotension, fewer anticholinergic side effects, and causes less of a decrease in the seizure threshold. In addition to this nonspecific sedation, a benefit would be its antipsychotic effect (in responsive patients), but this would be evident only after the acute episode of agitation has subsided. High doses of typical antipsychotics may lead to more adverse effects, includ-ing akathisia, which may itself provoke violent behavior (Keck-ich, 1978; Siris, 1985).

The new atypical antipsychotics may emerge as important options in the management of acute agitation in schizophrenia. Although sedation or “calming” remains the primary mode of action when used emergently in the acutely agitated patient, the atypical antipsychotics have several advantages over typical an-tipsychotics (Citrome, 1997), in particular a lower propensity for extrapyramidal side effects, including akathisia.