The rationale for combining treatment modalities is based on the idea that the strengths of each modality are promoted while the weaknesses are minimized, producing results that are better than with either modality alone.

The rationale for combining treatment modalities is based on the idea that the strengths of each modality are promoted while the weaknesses are minimized, producing results that are better than with either modality alone (Hollon and Fawcett, 1995). Although intuitively this rings true, psychiatrists have a duty to incorporate evidence-based approaches into their clinical practice. While most evidence-based mental health research in the literature is based on efficacy studies, there has been a recent move towards conducting effectiveness studies that are hoped to be of increased relevance to general outpatient clinical practice (Nathan et al., 2000). Table 87.1 highlights the differences between efficacy and effectiveness research (Barlow, 1996; Nathan et al., 2000). Re-cent literature examining the efficacies of combined treatment (not necessarily integrated treatment by a psychiatrist) vary by disorder, timing of treatments and whether administered during the acute or maintenance phase. Recent literature has also exam-ined the sequential application of combined treatment (Fava et al., 2001; Frank et al., 2000). Effectiveness studies are far fewer, as mentioned, and do not always demonstrate superiority of com-bined approaches over either medication or therapy alone. 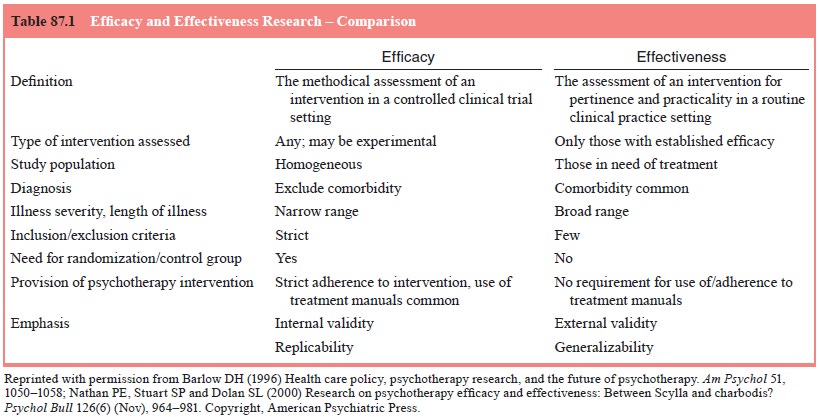 Hollon and Fawcett (1995) have outlined four ways in which combined treatment may prove advantageous over either treatment alone: increase the magnitude, probability, or breadth of clinical response, and increase the acceptability to the patient of either modality. In general, they feel that there is literature to support the statement that combined treatment enhances the breadth of clinical response. It is within this context that clini-cal practice guidelines published by the Agency for Health Care Policy and Research support the use of combined treatment in depressive disorders (Depression Guideline Panel, 1993).

Various authors discuss the potential benefits of employ-ing pharmacotherapy within a psychotherapeutic context (Kler-man, 1991; Kay, 2001). Pharmacotherapy has been noted to have a quicker onset of action on acute symptoms than most psycho-therapies, perhaps with the exclusion of cognitive therapy (Hol-lon and Fawcett, 2001). It is felt that this rapid dampening of symptoms may enhance the patient’s ability to more productively participate in therapy by a variety of mechanisms. These have been described cogently by Klerman (1985, 1991) and include en-hancing the patient’s self-esteem, creating a safe environment in which emotions are more freely discussed, reducing the stigma of seeking mental health care through a positive placebo effect, im-proving cognition (verbalization and abreaction), and functioning as a transitional object during breaks in therapy, among others.

The benefits of employing psychotherapy within a primarily psychopharmacologic relationship have also been described. Empirical evidence exists across the spectrum of mental health disorders to support the following suggested benefits of adding psychotherapy to medications. It decreases the incidence of illness relapse (Hogarty et al., 1986), as well as symptom relapse upon medication discontinuation (Wiborg and Dahl, 1996; Spiegel et al., 1994). It fosters the patient’s ability to utilize healthy coping strategies, addresses issues that are not typically targeted by psychopharmacologic treatment such as dysfunctional relationship patterns or negative self-appraisals due to traumatic past events, and enhances psychotropic compliance (Paykel, 1995; Cochran, 1984).

Adherence may be enhanced in part through discussion of the patient’s metaphor for the medication, either positive or negative (Kay, 2001).

The above case highlights one of the beliefs that patients may have regarding medications, that is, they indicate their provider’s level of interest in them as a person and the provider truly appreciates the level of their distress. In certain contexts these beliefs may be regarded as a “positive metaphor”; however in others, as demonstrated above, it may hinder the patient’s response to treatment, their compliance with the treatment regimen, and their level of trust in their provider.

As demonstrated by the vignettes, the meanings that the patient attributes to medication may have to do with cognitions and feelings in a variety of spheres including the illness, the pro-vider, and themselves (Beck, 2001).

The vignettes also serve to highlight potential benefits and chal-lenges surrounding integrated treatment described by Kay (2001). Integrated treatment essentially eliminates the communication difficulties encountered in split treatment set-tings. The practitioner of integrated treatment does face some obstacles. In both cases, the psychiatrist needs to be well trained in a variety of psychotherapy orientations, particularly in the orienta-tion that has evidence to support its use in a particular disorder.

To provide a theoretical framework for formulation of the patient and treatment plan, McHugh and Slavney (1983) similarly discuss understanding the psychiatrically ill patient from four “perspectives”. These multifactorial models of mental health illnesses serve as conceptual tools with which to understand the whole patient and those forces that together precipitate, perpetuate and modify illness course/progression. It stands to reason that a provider of integrated care should utilize an “integrated” model of illness description, etiology and treatment.

When a single provider directs both forms of treatment, traditional role conflicts may emerge. The role stereotype of a psychotherapist may include one who has a multidimensional understanding of the patient, is interested in intrapsychic/core conflicts and their manifestations in symptoms, behaviors, feel-ings and thoughts, and whose style is less authoritarian. The pharmacotherapist’s traditional role stereotype is of a biological/ neurochemical understanding of the patient and a prescriptive, structured, more authoritarian style in approaching diagnosis, medications and other issues. While these roles are, as described, stereotypic, they do have in common the role of the provider in establishing rapport and a therapeutic alliance with the patient. It has been suggested that the psychiatrist who uses an integrated model provides more time for development of the therapeutic al-liance thus increasing the patient’s comfort in disclosing embar-rassing side effects of medication and, perhaps, even aiding in treatment outcome via the strength of the alliance (Gabbard and Kay, 2001). Psychotherapy studies have suggested that therapist variables accounted for 30% of the variance in outcomes, and that therapeutic alliance is perhaps the most important factor in positive treatment outcomes (Lambert, 1992; Svartberg et al., 1998). The therapeutic alliance is crucial; as such, management of transitions between roles, as well as the seamless integration of roles is imperative within the practice of integrated treatment (Gabbard and Kay, 2001). These role transitions may occur rap-idly and within a single session.

A familiarity with current literature and clinical practice guidelines concerning when to employ medications alone, ther-apy alone, or both, and when sequential treatments may lead to a greater probability of remission is a must for any clinician utiliz-ing combined treatment.

This example highlights one way in which to fluidly incorporate both domains (psychotherapy and pharmacotherapy) within each patient visit. The above approach is structured in nature, follow-ing cognitive therapy’s principle that sessions are structured and remain constant during therapy (Beck, 1995). Providers of psychodynamic therapy, among other types of therapy, often prefer this structured type of approach, advocating that medica-tion use either be discussed at the beginning or at the end of the session. Proponents of the beginning method feel that discussion of medication issues ensures adequate time is spent on concerns and may provide important material for the session. Advocates of the “set aside 5 to 10 minutes at the end of the session” ap-proach feel that it is most important for the patients to set their own agenda, as this allows for time needed for the patient to regain composure/recompensate before the end of the session. Another approach is the nonstructured method. In this case the therapist addresses medication issues only when the need arises. As there are no evidence-based studies to guide clini-cal practice, it is most important to base the choice on patient and provider preference and to practice consistency with each patient (Kay, 2002).

How can the psychiatrist tailor his/her treatment options to each individual patient? When would sequential approaches be indicated and in which disorders are combined treatments most likely to be helpful? During which phase of treatment (acute versus maintenance) should combined treatments be used versus solo treatments (either medications or therapy)? For what severity of illness are combined treatments pre-ferred? Is there evidence to support sequential approaches and should they be specifically targeted to stages of the illness? How might understanding physiologic changes in the brain, which occur in the context of both medications and psycho-therapy, help guide our research and clinical treatment inter-ventions? It should be kept in mind that research regarding these issues is in its infancy, and many recommendations may require further studies definitively to aid with the establish-ment of critical pathways for each of the disorders In spite of the need for further research, combined treatment appears useful for all major categories of psychotic illness, including anxiety and mood disorders, psychotic disorders, eating disor-ders and substance abuse. 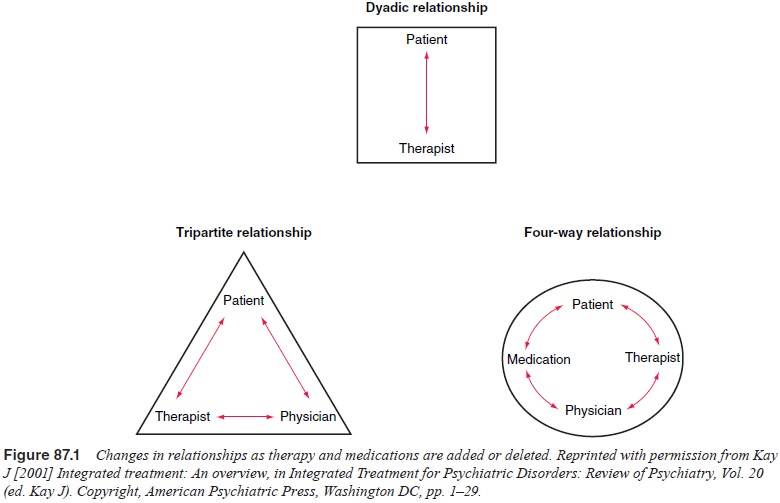