Several treatment strategies are used with clients with per-sonality disorders; these strategies are based on the disorder’s type and severity or the amount of distress or functional impairment the client experiences.

Several treatment strategies are used with clients with per-sonality disorders; these strategies are based on the disorder’s type and severity or the amount of distress or functional impairment the client experiences. Combinations of medica-tion and group and individual therapies are more likely to be effective than is any single treatment (Svrakic & Cloninger, 2005). Not all people with personality disorders seek treat-ment, however, even when significant others urge them to do so. Typically, people with paranoid, schizoid, schizotypal, narcissistic, and passive-aggressive personality disorders are least likely to engage or remain in any treatment. They see other people, rather than their own behavior, as the cause of their problems.

·    Low reward dependence and cluster A disorders corre-spond to the categories of affective dysregulation, de-tachment, and cognitive disturbances.

·    High novelty seeking and cluster B disorders corre-spond to the target symptoms of impulsiveness and aggression.

·    High harm avoidance and cluster C disorders corre-spond to the categories of anxiety and depression symptoms.

Several types of aggression have been described in peo-ple with personality disorders. Aggression may occur in impulsive people (some with a normal electroencephalo-gram and some with an abnormal one); people who exhibit predatory or cruel behavior; or people with organic-like impulsivity, poor social judgment, and emotional lability. Lithium, anticonvulsant mood stabilizers, and benzodiaz-epines are used most often to treat aggression. Low-dose

neuroleptics may be useful in modifying predatory aggres-sion (Simeon & Hollander, 2006). 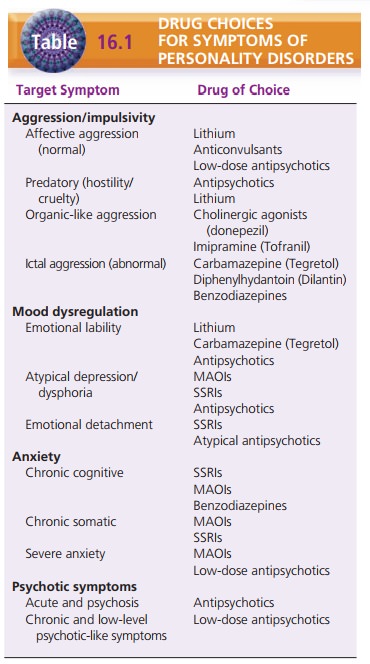 Therapy helpful to clients with personality disorders varies according to the type and severity of symptoms and the par-ticular disorder. Inpatient hospitalization usually is indicated when safety is a concern, for example, when a person with borderline personality disorder has suicidal ideas or engages in self-injury. Otherwise, hospitalization is not useful and may even result in dependence on the hospital and staff.

Individual and group psychotherapy goals for clients with personality disorders focus on building trust, teaching basic living skills, providing support, decreasing distressing symptoms such as anxiety, and improving interpersonal relationships. Relaxation or meditation techniques can help manage anxiety for clients with cluster C personality disor-ders. Improvement in basic living skills through the rela-tionship with a case manager or therapist can improve the functional skills of people with schizotypal and schizoid personality disorders. Assertiveness training groups can assist people with dependent and passive-aggressive per-sonality disorders to have more satisfying relationships with others and to build self-esteem.

Cognitive–behavioral therapy has been particularly helpful for clients with personality disorders (Lynch, Trost, Salsman, & Linehan, 2007). Several cognitive restructur-ing techniques are used to change the way the client thinks about self and others: thought stopping, in which the client stops negative thought patterns; positive self-talk, designed to change negative self-messages; and decatastro-phizing, which teaches the client to view life events more realistically and not as catastrophes.

Dialectical behavior therapy was designed for clients with borderline personality disorder (Linehan, 1993). It focuses on distorted thinking and behavior based on the assumption that poorly regulated emotions are the under-lying problem. Table 16.2 summarizes the symptoms of and nursing interventions for personality disorders. 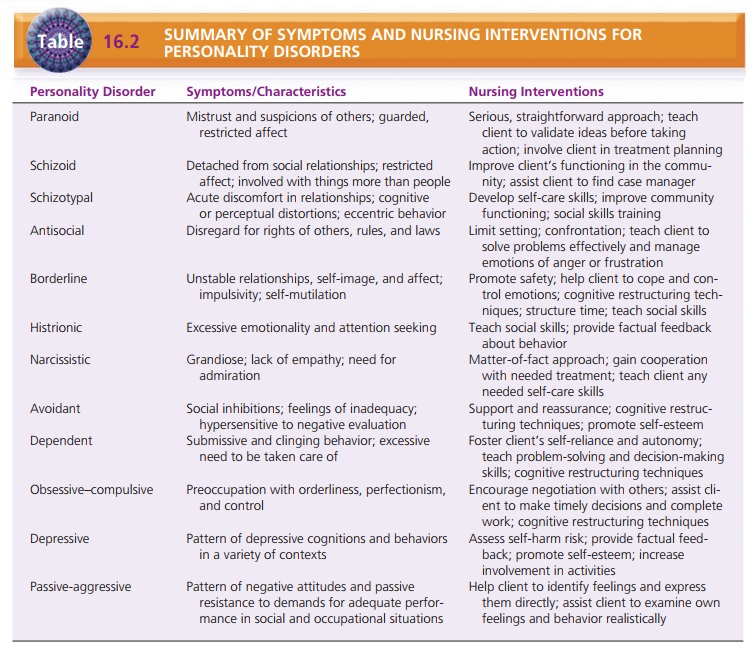