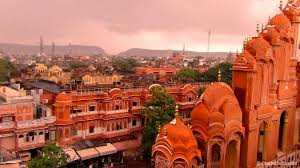 At Jaipur we were fortunate in having an introduction to one of the great thakurs of the State.

At Jaipur we were fortunate in having an introduction to one of the great thakurs of the State. He was a mighty land holder, the owner of twenty villages with populations ranging from five hundred to as many thousands, a feudal lord who paid for his fief (until, a year or two ago, a somewhat simpler and more modern system of tenure was introduced) by contributing to the State army one hundred and fifty armed and mounted men. This nobleman was kind enough to place his elephant at our disposal.

It was a superb and particularly lofty specimen, with gold-mounted tusks; ate two hundredweights of food a day and must have cost at least six hundred a year to keep. An expensive pet. But for a man in the thakur's position, we gathered, indispensable, a necessity. Pachyderms in Rajputana are what glass coaches were in Europe a century and a half ago - essential luxuries.

The thakur was a charming and cultured man, hospitably kind as only Indians can be. But at the risk of seeming ungrateful, I must confess, that, of all the animals I have ever ridden, the elephant is the most uncomfortable mount. On the level, it is true, the motion is not too bad. One seems to be riding on a small chronic earthquake; that is all. The earthquake becomes more disquieting when the beast begins to climb. But when it goes downhill, it is like the end of the world. The animal descends very slowly and with an infinite caution, planting one huge foot deliberately before the other, and giving you time between each calculated step to anticipate the next convulsive spasm of movement - a spasm that seems to loosen from its place every organ in the rider's body, that twists the spine, that wrenches all the separate muscles of the loins and thorax. The hills round Jaipur are not very high. Fortunately; for by the end of the three or four hundred feet of our climbing and descending, we had almost reached the limits of our endurance. I returned full of admiration for Hannibal. He crossed the Alps on an elephant.

We made two expeditions with the pachyderm; one - over a rocky pass entailing, there and back, two climbs and two sickening descents - to the tanks and ruined temples of Galta, and one to the deserted palaces of Amber. Emerging from the palace precincts - I record the trivial and all too homely incident, because it set me mournfully reflecting about the cosmos - our monster halted and, with its usual deliberation, relieved nature, portentously. Hardly, the operation over, had it resumed its march when an old woman who had been standing at the door of a hovel among the ruins, expectantly waiting - we had wondered for what - darted forward and fairly threw herself on the mound of steaming excrement. There was fuel here, I suppose, for a week's cooking. "Salaam, Maharaj," she called up to us, bestowing in her gratitude the most opulent title she could lay her tongue to. Our passage had been to her like a sudden and unexpected fall of manna. She thanked us, she blessed the great and charitable Jumbo for his Gargantuan bounty.

Our earthquake lurched on. I thought of the scores of millions of human beings to whom the passage of an unconstipated elephant seems a godsend, a stroke of enormous good luck. The thought depressed me. Why are we here, men and women, eighteen hundred millions of us, on this remarkable and perhaps unique planet? To what end? Is it to go about looking for dung - cow dung, horse dung, the enormous and princely excrement of elephants? Evidently it is - for a good many of us at any rate. It seemed an inadequate reason, I thought, for our being here - immortal souls, first cousins of the angels, own brothers of Buddha and Mozart and Sir Isaac Newton.

But a little while later I saw that I was wrong to let the consideration depress me. If it depressed me, that was only because I looked at the whole matter from the wrong end, so to speak. In painting my mental picture of the dung-searchers I had filled my foreground with the figures of Sir Isaac Newton and the rest of them. These, I perceived, should have been relegated to the remote background and the foreground should have been filled with cows and elephants. The picture so arranged, I should have been able to form a more philosophical and proportionable estimate of the dung-searchers. For I should have seen at a glance how vastly superior were their activities to those of the animal producers of dung in the foreground. The philosophical Martian would admire the dung-searchers for having discovered a use for dung; no other animal, he would point out, has had the wit to do more than manufacture it.

We are not Martians and our training makes us reluctant to think of ourselves as animals. Nobody inquires why cows and elephants inhabit the world. There is as little reason why we should be here, eating, drinking, sleeping, and in the intervals reading metaphysics, saying prayers, or collecting dung. We are here, that is all; and like other animals we do what our native capacities and our environment permit of our doing. Our achievement, when we compare it with that of cows and elephants, is remarkable. They automatically make dung; we collect it and turn it into fuel. It is not something to be depressed about; it is something to be proud of. Still, in spite of the consolations of philosophy, I remained pensive.