The creation and updating of water absorbing system (vascular tissues) led to the diversity of the plant kingdom.

Over 450 million years ago (the Ordovician period in Paleozoic era) plants migrated from their own sophisticated water world to newly formed land. The land had harsh environment; water availability was deeper and so plants struggled for getting water for their very existence. Some of them failed to survive and rest adopted themselves to the new world. The biggest adaptations followed for their survival was building their own water absorbing systems to draw water from deep inside the land. The creation and updating of water absorbing system (vascular tissues) led to the diversity of the plant kingdom. The gregarious growth of prehistoric pteridophytes, gymnosperms and present-day flowering plants led to the biggest challenge in the transport of water from root to several meters high trees against gravity. In this chapter, we will study the events taking place between the gain of water in roots and loss in leaves and the mechanisms behind the basic physical and biological processes in the movement of water, gases and minerals in plants. Further, we study how food material synthesized in the leaf can be transported to various utilizing and storage areas against struggles and challenges.

The Plumbing system of Plants and Humans 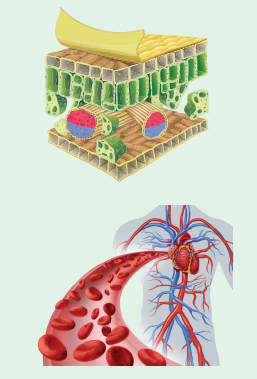 Plants and animals evolved separately but developed comparable structures to control transport of water and dissolved chemicals. But whose transport system is optimally designed to offer selective advantage? In plants, transport through xylem has allowed growth in height and colonization of diverse habitats and the system has to be extensive as Photosynthesis requires water. Murrayâ€™s law predicts the thickness of branches in transport networks, such that the cost for transport and maintenance of the transport medium is minimized. This law is observed in the vascular and respiratory systems of animals, xylem in plants, and the respiratory system of insects. Further research in this area will improve our understanding of natural world.