Cell to cell or short distance transport covers the limited area and consists of few cells.

When we expose a lightened incense stick or mosquito coil or open a perfume bottle in a closed room, we can smell the odour everywhere in the room. This is due to the even distribution of perfume molecules throughout the room. This process is called diffusion. 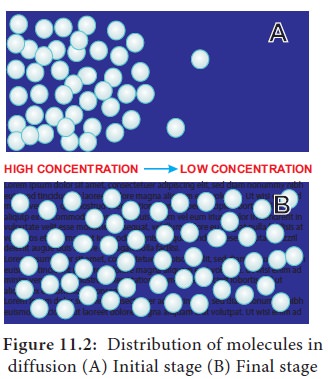 In diffusion, the movement of molecules is continuous and random in order in all directions (Figure 11.2).

iii.      Diffusion is obvious in gases and liquids.

iv.        Diffusion is rapid over a shorter distance but extremely slow over a longer distance.

v.           The rate of diffusion is determined by temperature, concentration gradient and relative density.

Significance of diffusion in Plants

ii.           In transpiration, water vapour from intercellular spaces diffuses into atmosphere through stomata by the process of diffusion.

iii.        The transport of ions in mineral salts during passive absorption also takes place by this process.

Cell membranes allow water and nonpolar molecules to permeate by simple diffusion. For transporting polar molecules such as ions, sugars, amino acids, nucleotides and many cell metabolites is not merely based on concentration gradient. It depends on,

A solution is made up of solute particles dissolved in a solvent and the permeability of the above components depends on the nature of cell membranes, which is given below:

Permeable: They allow diffusion of both solvent and solute molecules through them. Example: Cellulosic cell wall.

Selectively permeable: All bio membranes allow some solutes to pass in addition to the solvent molecules. Example: Plasmalemma, tonoplast, and membranes of cell organelles.

In facilitated diffusion, molecules cross the cell membrane with the help of special membrane proteins called transport proteins, without the expenditure of ATP.

There are two types of transport proteins present in the cell membrane. They are channel protein and a carrier protein.

Channel protein forms a channel or tunnel in the cell membrane for the easy passage of molecules to enter the cell. The channels are either open or remain closed. They may open up for specific molecules. Some channel proteins create larger pores in the outer membrane. Examples: Porin and Aquaporin.

Porin is a large transporter protein found in the outer membrane of plastids, mitochondria and bacteria which facilitates smaller molecules to pass through the membrane.

Aquaporin is a water channel protein embedded in the plasma membrane. It regulates the massive amount of water transport across the membrane (Figure 11.3). Plants contain a variety of aquaporins. 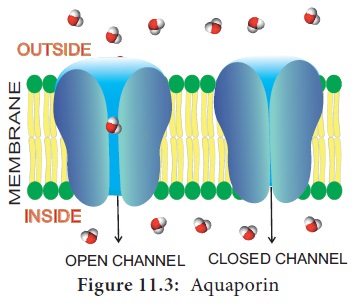 Over 30 types of aquaporins are known from maize. Currently, they are also recognized to transport substrates like glycerol, urea, CO2, NH3, metalloids, and Reactive Oxygen Species (ROS) in addition to water. They increase the permeability of the membrane to water. They confer drought and salt stress tolerance.

Carrier protein acts as a vehicle to carry molecules from outside of the membrane to inside the cell and vice versa (Figure 11.4). Due to association with molecules to be transported, the structure of carrier protein gets modified until the dissociation of the molecules. 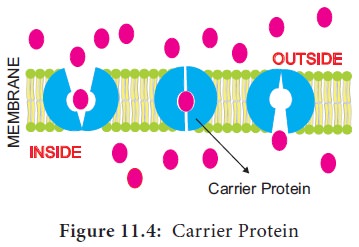 There are 3 types of carrier proteins classified on the basis of handling of molecules and direction of transport (Figure 11.5). They are, 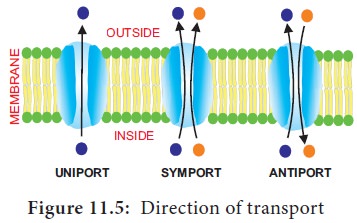 i.           Uniport: In this molecule of a single type move across a membrane independent of other molecules in one direction.

ii.         Symport or co-transport: The term symport is used to denote an integral membrane protein that simultaneously transports two types of molecules across the membrane in the same direction.

iii.      Antiport or Counter Transport: An antiport is an integral membrane transport protein that simultaneously transports two different molecules, in opposite directions, across the membrane. 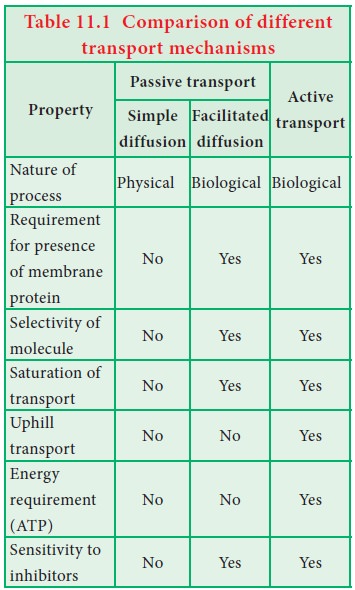 What are the similarities and differences between co- transport and counter transport?

Similarity: In both system two molecules are involved for the unidirectional transport.