Heat does not stay where we put it. Hot things get colder and cold things get hotter. Heat transfer takes place in three ways: i. Conduction, ii. Convection, iii. Radiation

Heat does not stay where we put it. Hot things get colder and cold things get hotter.

Heat is transferred from one place to another till their temperatures become equal. Heat transfer takes place when heat energy flows from the object of higher temperature to an object with lower temperature. It is shown in Fig. 1.2. 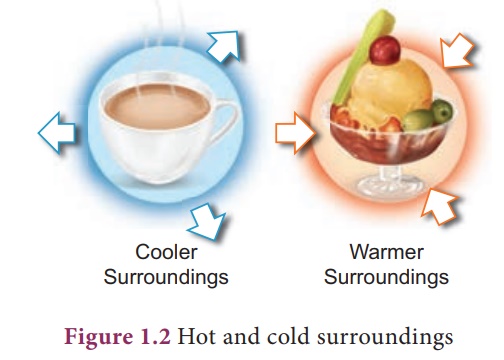 In solids, molecules are closely arranged so that they cannot move freely. When one end of the solid is heated, molecules at that end absorb heat energy and vibrate fast at their own positions. These molecules in turn collide with the neighboring molecules and make them vibrate faster and so energy is transferred. This process continues till all the molecules receive the heat energy. 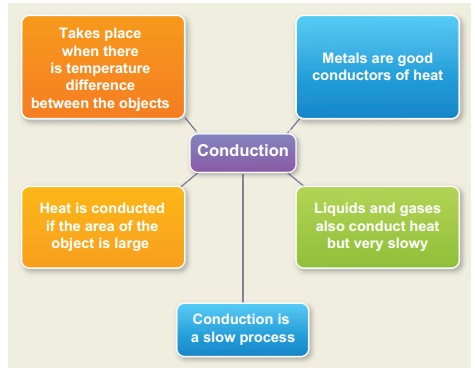 ·           Metals are good conductors of heat. So, aluminium is used for making utensils to cook food quickly.

·           We wear woolen clothes is winter to keep ourselves warm. Air, which is a bad conductor, does not allow our body heat to escape. 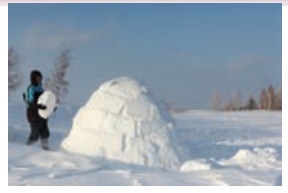 In the above activity, water molecules at the bottom of the beaker receive heat energy and move upward and replace the molecules at the top. Same thing happens in air also. When air is heated the air molecules gain heat energy allowing them to move further apart. Warm air is less dense than cold air and will rise. Cooler air moves down to replace the air that has risen. It heats up, rises and is again replaced by cooler air, creating a circular flow. 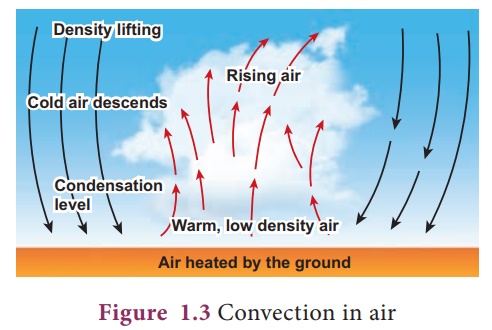 Air molecules at the bottom of the balloon get heated by a heat source and rise. As the warm air rises, cold air is pushed downward and it is also heated. When the hot air is trapped inside the balloon, it rises. 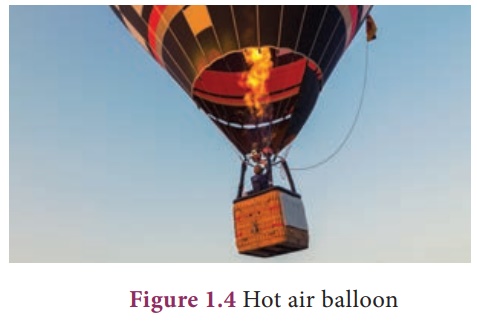 During day time, the air in contact with the land becomes hot and rises. Now the cool air over the surface of the sea replaces it. It is called sea breeze. During night time, air above the sea is warmer. As the warmer air over the surface of the sea rises, cooler air above the land moves towards the sea. It is called land breeze. 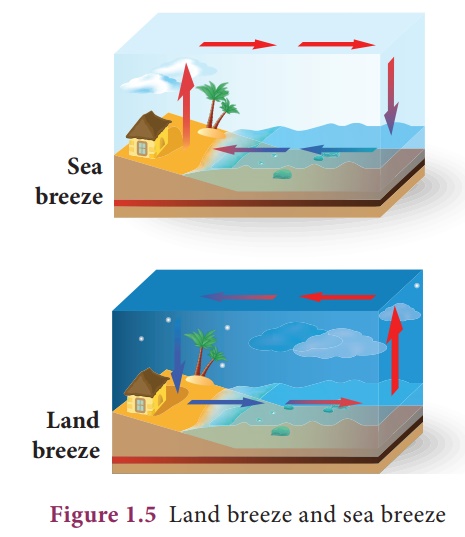 Tall chimneys are kept in kitchen and industrial furnaces. As the hot gases and smoke are lighter, they rise up in the atmosphere.

Radiation is a method of heat transfer that does not require particles to carry the heat energy. In this method, heat is transferred in the form of waves from hot objects in all direction. Radiation can occur even in vacuum whereas conduction and convection need matter to be present. Radiation consists of electromagnetic waves travelling at the speed of light. Thus, radiation is the flow of heat from one place to another by means of electromagnetic waves.

Transfer of heat energy from the sun reaches us in the form of radiation. Radiation is emitted by all bodies above 0 K. Some objects absorb radiation and some other objects reflect them. This can be shown using the demonstration set up shown in Fig 1.6. In this figure the inside surface of one plate is shiny and of the other is dull black. Coins are stuck on the outside of each plate with candle wax. If the heater is midway between the plates they each receive the same amount of radiation. After few minutes the wax on the black plate melts and the coin falls off. The shiny plate stays cool and the wax on it is un-melted. 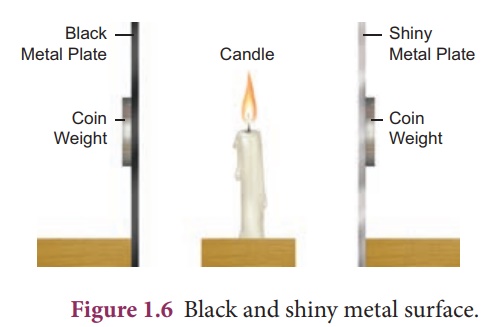 1.        White or light colored cloths are good reflectors of heat. They keep us cool during summer.

2.        Base of cooking utensils is blackened because black surface absorb more heat from the surrounding.

3.        Surface of airplane is highly polished because it helps to reflect most of the heat radiation from the sun.