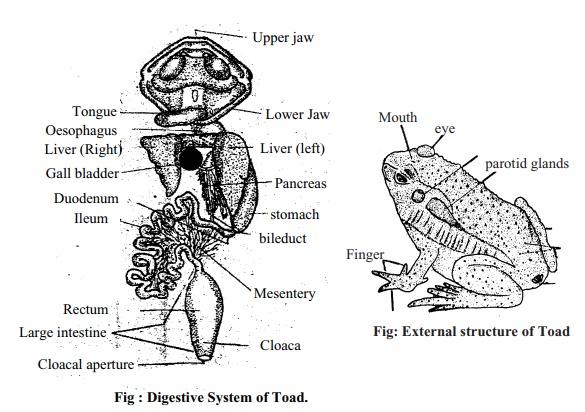 Toad: Toad is a familiar animal of the class Amphibia. Its body is bilaterally symmetrical. The body of toad is gray coloured with warts throughout and divided into two portions, namely: 1.Head 2.Trunk

Toad: Toad is a familiar animal of the class  Amphibia.  Its  body  is  bilaterally symmetrical.  The  body  of  toad  is  gray coloured  with  warts  throughout  and divided  into  two  portions,  namely:

1. Head:  The  shape  of  head  is  like  an equilateral  triangle.  Its  mouth  is  verylarge and bordered by jaws. In front of the head there are nasal apertures and at the back two eyes. Behind the eyes there are two tympanic membrane's. Two glands known as parotid glands are located behind the tympanum.

2. Trunk: The portion of body extending from fore limbs to hind limbs isknown as trunk. At the end of trunk lies the anus. 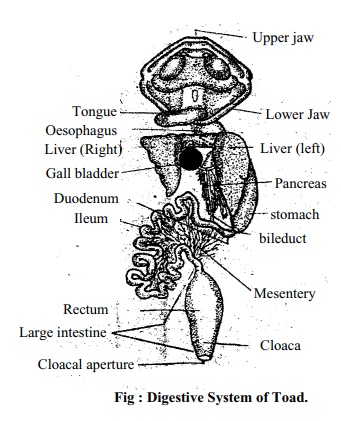 1. Alimentary Canal: Alimentar Canal of toad is tube like and extended from the mouth to the  anus. It consists of the following organs. e.g.

Bring a live toad in the laboratory, keep it in a glass jar. Insert cotton wool soaked with chloroform in the jar for a few minutes. The toad will be anaesthetized. 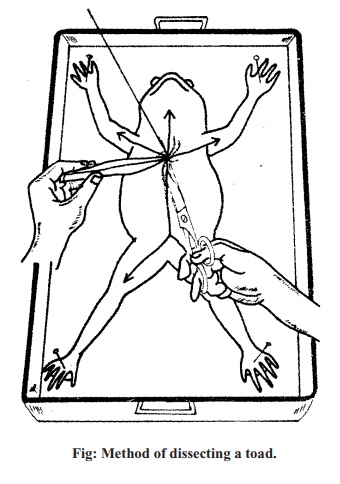 If chloroform in not available, push a pin in the brain or feed the toad saline water to senseless it. Now place the toad on the dissecting tray keeping the ventral side upward. Pull the fore limbs and hind limbs straight and fixed them with the pins in wax tray. Now pour water in the tray.

Now hold the skin with the forceps and dissect to separate the skin from the fleshy part of the body. Pin up the skin on two sides in the tray.

Now observe the different parts of the alimentary system. according to the figure.

Equipment: The instruments required for dissection of toad are wax-traychloroform, forceps, blade or scissor and pins.

a)      The Pectoral girdle consists of two similar and symmetrical half.

c)        Sternum is located at the lower end of pectoral girdle.

d)       Suprascapula is wide and thin. Scapula is hard thick and elongated. 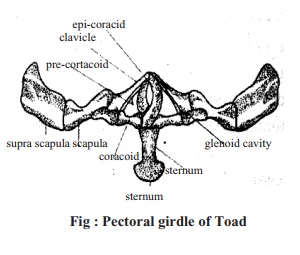 Humerus : It is the first bone of forelimb of toad.

a)   This bone is long and narrow towards the posterior end.

c)    The bone has a trochlea at the posterior end.

·     The two bones radius and ulna, being fused together to form the bone.

·      The posterior end of this bone is comparatively wide. 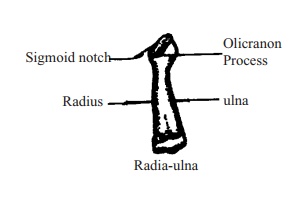 Next to radia-ulna there are small round bones known as carpal.

Bones are arranged in two rows.

They are next to carpal. 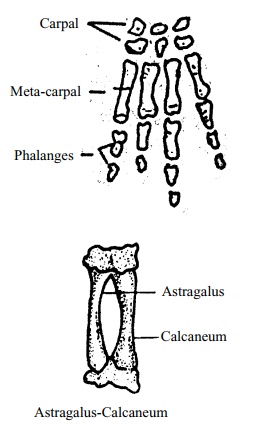 l. There are four phalanges in the forelimb.

2. The girdle is divided into two similar parts. Pubis

3. In each half there are illium, ischium and pubis. Fig : Pelvic Girdle

4 In the junction of these  three bones there is acetabulum. 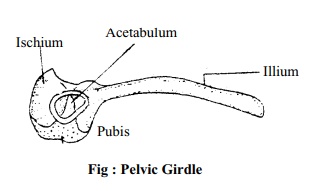 Femur: It is the first bone of the hindlimb of toad.

The bone is elongated and sticklike.

The bone is a little curved.

The tip of the bone is round. Posterior end has a swelling. 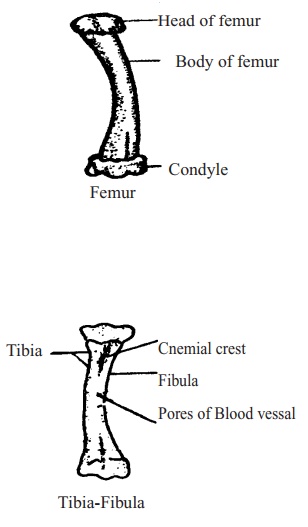 It is the tibia-fibula of hind leg of toad.

1.The bone is long and the ends are wide. Tibia

2. Two bones Tibia and Fibula being fused together form the bone, at the junction there is a cnemial crest.

3.The elevated regions on both sides of the depression are clearly seen.

Astragalus and Calcaneum: It is the bone of hind leg of toad.

b)  Both the bones are narrow elongated with a gap in-between.

c)    The terminal ends of both the bones are fused. 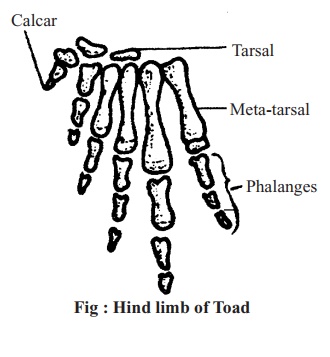 Tarsals : The Tarsal bones are arranged intwo rows. 1st row is formed by two small bones. And these two bones are just belowthe astragalus and calcaneum. 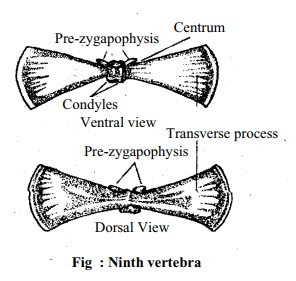 1. These are finger bones.

2. There are five fingers in the hind limb of Toad.

First Vertebra or Atlas: It is the first vertebra of the vertebral column of Toad.

4. Centrum is small but wide.

6. Front end of centrum is concave and posterior end is convex. 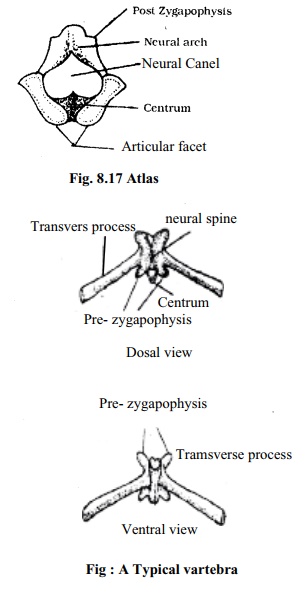 It is the typical vertebra of Toad.

On both sides of neural arch there is transverse process.

Prezygapophysis and postzygapohsis are present.

Ninth Vertebra: It is the ninth vertebra of the vertebral column of Toad.

At the anterior end there is centrum.

On the posterior region there are two condyles.

Neural canal and neural arch are not completely developed.

Urostyle: It is the last bone of vertebral.

column of toad or urostyle.

3. At the anterior end there is concave  depression or facet.

4. At the midline of the bone there is a neural crest like a blade of a knife.